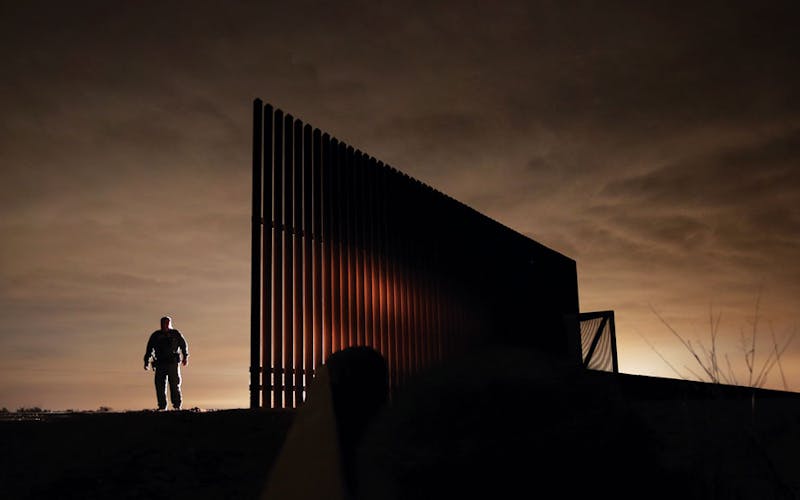 The Texas section of the U.S.-Mexico border measures roughly 1,254 miles from El Paso to Brownsville along the Rio Grande, which was firmly established as the geographical border in the Treaty of Guadalupe Hidalgo in 1848.

But the border is more than an arbitrary line distinguishing two nations from one another; it is a region where cultural exchange is the norm and nations’ identities are blurred. In the February 1987 issue, Texas Monthly’s editorial staff described the region as “the 1256-mile border shared by Texas and Mexico and the lands immediately adjacent. This is the new frontier—the nuevo frontier—of the continent. It is a true frontier, for here a new society with its distinctive language, customs, and culture is being shaped out of the old.”

Living in such close proximity to each other, the cultural influence of these two nations permeates nearly every aspect of life: art, food, music, language—even commerce.  In the May 1990 issue, Joseph Harmes explained that “international commerce is Laredo’s mainstay. Of the $52 billion in trade between the United States and Mexico in 1989, Laredo claimed the lion’s share.” (“A Bridge Too Far?” May 1990)

But over the past two decades that promising nuevo frontier has become a battleground. Oscar Casares wrote that “today the area seems like a cauldron of the nation’s deepest anxieties, a place where concerns about undocumented immigration, fears of terrorism and, more recently, nervousness about spillover violence from Mexico’s drug war have boiled into repeated calls for a more secure border.”

There exists a tension between the lawmakers, who describe the border as an unstable area—repeating sometimes false narratives of spillover violence—and the inhabitants of the border region, who find themselves butted up against Mexican cities that are undeniably dangerous.

In the past decade, there have been various cries and calls for a more secure border, rhetoric that has prompted federal officials to flood the area with more than ten thousand border patrol agents; build an incomplete border fence; and erect bureaucratic hurdles at border crossings. “These days, Black Hawk helicopters cruising the skies are not an uncommon sight, and drones and electronic surveillance equipment of various kinds take part in the constant monitoring of activity up and down this frontier. U.S. citizens, both Anglo and Hispanic, complain of being hassled at all hours of the day and night, often on private property, by heavily armed green-clad agents demanding identification,” wrote former editor-in-chief Jake Silverstein.

The border crisis came to a head during the summer of 2014 as border towns in Texas and other states became increasingly inundated with unaccompanied minors who made their way from Guatemala, El Salvador, and Honduras. In 2009 the Border Patrol apprehended just over 3,000 of these unaccompanied minors from Central America, but in 2014 that number rose to 0ver 68,000.

The Texas border’s permeable nature—both in a physical and cultural sense—is symbolic of America’s past and future. And for those who call the border home, economic and political issues have not and will not disrupt the blending of identities and exchange of cultures that make the borderland what it has always been—the nuevo frontier.