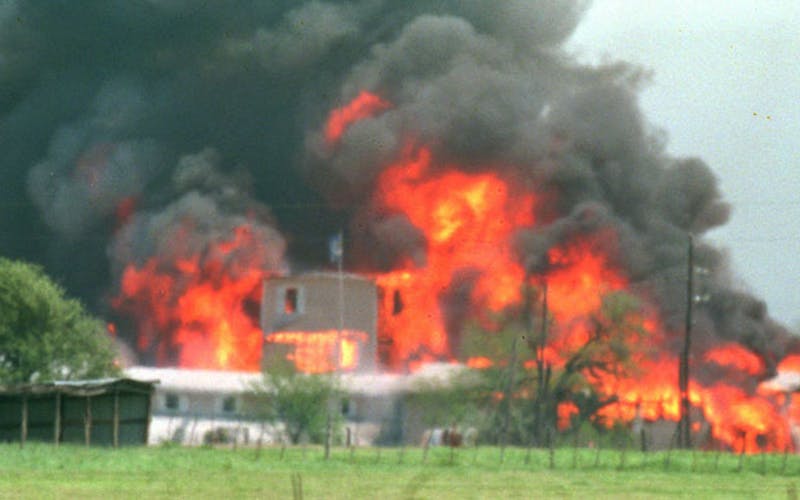 One of the most tragic and controversial incidents in Texas history occurred in 1993 at a compound known as Mt. Carmel on a ranch near Waco. The compound was occupied by the Branch Davidians, a heavily armed religious cult led by a charismatic guru named David Koresh. Spurred by allegations of child abuse inside the compound, federal agents with the Bureau of Alcohol, Tobacco, and Firearms attempted to serve a warrant on February 28, 1993, only to find themselves in a massive firefight, during which several agents and Davidians were killed. A fifty-day siege ensued, culminating on April 19 with a nationally televised assault on the compound with armored vehicles and tear gas. During the assault, a fire consumed the entire compound, killing 74 people, 23 of whom were children.

In 1997, an Emmy award-winning documentary, Waco: The Rules of Engagement, called into question the government’s version of events and the poor judgment that led to the standoff and the eventual disaster. A subsequent investigation by former U.S. Senator John C. Danforth determined that the fire had been set by the Davidians themselves, though his report was also critical of the decision-making by federal authorities as well as the lack of candor in the aftermath of the tragedy.

The disaster at Mt. Carmel became a rallying cry for some of the far-right of the political spectrum; the bombing of the Alfred P. Murrah federal building in Oklahoma City, for example, occurred on the second anniversary of the tragedy. Ten years after the fire, in 2003, Texas Monthly senior editor Michael Hall visited a new church that had been constructed at Mt. Carmel and interviewed the small group of Davidians who still followed the sect’s apocalyptic vision. In 2008, executive editor Pam Colloff interviewed dozens of eyewitnesses to the siege and produced a definitive oral history of one of the most infamous events in Texas history.