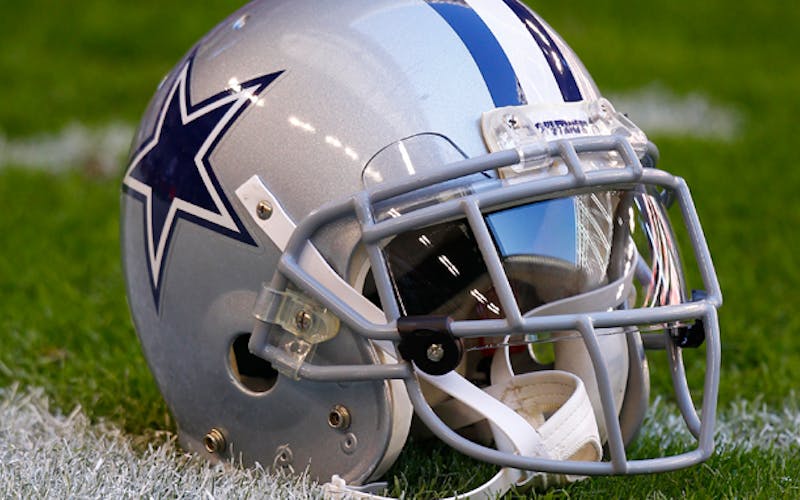 “How ’bout them Cowboys?” Once an exultation, it could now be a lament. But the current Jerry Jones era of big money and small, sad football doesn’t change a thing: the NFL franchise that oilman Clint Murchison Jr., general manager Tex Schramm, and head coach Tom Landry started at the Cotton Bowl in 1960 is right up there with brisket and the Alamo as something that nearly all Texans agree on (just ask Facebook). The very existence of Cowboys-haters, as well as Houston’s little-brother NFL frustration, merely confirms the Cowboys’ status as a state religion.

Gary Cartwright covered the Cowboys for Texas Monthly from Issue 1, starting with a profile of Duane Thomas. That same February 1973 magazine also featured Sherry Kafka’s story on Don Meredith, broadcaster and would-be actor. Attending a Cowboys reunion in 1997, Cartwright recalled how unappreciated Dandy Don was . . . but also how Tom Landry’s cool reaction to Meredith’s decision to retire at the age of 31 ultimately cleared the way for 27 year-old rookie Roger Staubach and the team’s first Super Bowl win in 1972.

“Conventional wisdom holds that all successful teams take on the character of their head coach . . . but the Cowboys have traditionally inherited the character traits of their owners,” Cartwright wrote in March 1996, referring to both the Murchison and Jones eras (nevermind Bum Bright). Murchison largedly deferred to Landry and Schramm (who not only drafted Staubach, but played a role in the creation of the Dallas Cowboys cheerleaders, post-season wild cards, and the AFC-NFC merger). Jones defers to no one. As Cartwright noted in 1996, Boston Globe columnist Dan Shaughnessy once said that if Jerry didn’t exist, Dan Jenkins would have invented him.

Really, everything you need to know about the team can be distilled into three sets of numbers:

The middle period, of course, was the brief but spectacular era of head coach Jimmy Johnson and the extraordinary core of quarterback Troy Aikman, running back Emmitt Smith, wide receiver Michael Irvin, defensive end Charles Haley and so many more, as well as Barry Switzer’s 1995 Super Bowl win in Johnson’s after-glow. In 1994, Cartwright gave Jones the benefit of the doubt for firing Johnson; by 2007 he was part of what remains an annual tradition in the Cowboys media: calling for Jones to fire himself as general manager. Cartwright also expressed his dismay about the Jones era in 1997, 2001, and 2003. But he had the highest hopes for Tony Romo.

With the 2010 opening of Arlington’s $1 billion-plus Cowboys Stadium–it needs no corporate sponsor, because “Dallas Cowboys” is a brand unto itself–the franchise will probably never shake its rep for prioritizing spectacle and revenue over winning (even when it finally wins again). But then, Cartwright and former Baltimore Sun columnist John Eisenberg (author of the book Cotton Bowl Days) thought the same about the team’s 1971 move to Texas Stadium in Irving. “The concept of pro football as a social event didn’t arrive in Dallas” until then, wrote Cartwright. As Eisenberg put it: “Teams no longer wanted fans: They wanted clients.”

So yes, the Cowboys are the New York Yankees, Elvis Presley, and Darth Vader (Cowboys Stadium is either known as “JerryWorld” or “The Death Star”) rolled into one football franchise, and that’s all right with Jerry Jones. “Pro football is the number-one-rated program in all of television, and the Cowboys are the number-one-rated brand in the NFL,” he told Evan Smith in a 2009 Texas Monthly Talks interview. But fans who hate Jones still know that he wants the team to win as much as they do, even when he’s also a big reason it’s not happening. In one essential way, he understands.

“I know what it means to own something, but I don’t, for one minute, think I own the Dallas Cowboys,” Jones told Smith. “You can’t own the Cowboys. You can’t own the University of Texas. The fans, the people who are passionate from generation to generation, are the real owners.”