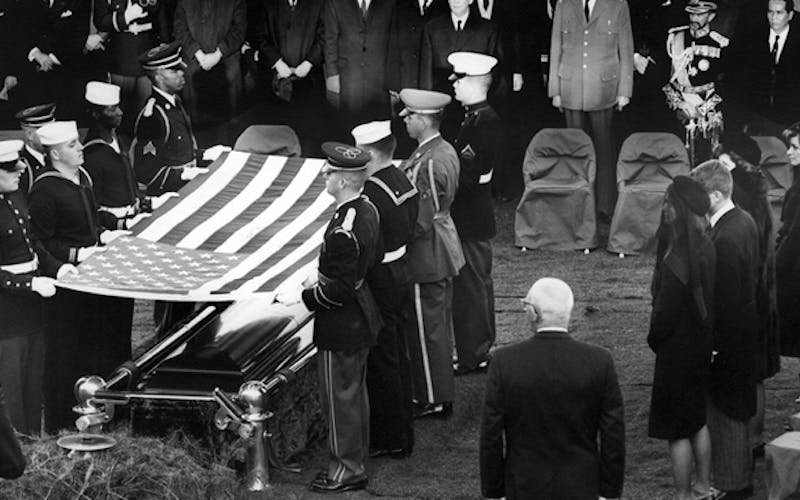 At half past noon on November 22, 1963, president John F. Kennedy was shot and killed while he was riding down Dallas’s Dealy Plaza in a presidential motorcade with his wife, Jaqueline, and Texas Governor John Connally and Connally’s wife, Nellie. In 1964, the Warren Commission concluded that Lee Harvey Oswald, a former U.S. Marine who had defected to the Soviet Union, had committed the assasination alone. But before Oswald could be tried, he was shot by night club owner Jack Ruby, who took aim while Oswald was being transferred to a county jail.

The assasination of our 35th president was a seminal event in Texas. The tragedy seemed to seal the perception of our state as being populated by a bunch of trigger-happy yeehaws who were beyond forgiveness. Some of our early stories explore that theme: Alexander Cockburn’s profile of Lee Harvey Oswald’s mother, Marguerite; Gary Cartwright’s “Who was Jack Ruby?“; and William Broyles’s profile of Hugh Aynesworth, who as of 1976, could not let go of the assassination conspiracy theories that plagued him since that terrible day in Dallas. Lawrence Wright recounted his struggles as a young man, growing up under the assassination’s shadow in 1983, in an essay entitled “Why do they hate us so much?“: “It was a shock how much the world hated us—and why? Oswald was only dimly a Dallasite. He was a Marxist and an atheist; you could scarcely call him a product of the city. He was, if anything, the Anti-Dallas, the summation of everything we hated and feared. How could we be held responsible for him? The world decided that Kennedy had died in enemy territory, that no matter who had killed him, we had willed him dead.”

Over time, however, it surprised many of us Texans that hatreds softened and memories faded. The conspiracy theories that looked like sure things upon closer inspection seemed to come to little, according to then editor, Greg Curtis in 1989. Then Oliver Stone stirred everybody up again with JFK, the movie; Mark Seal’s story describes the reenactment of the assassination in tragicomic detail.

This collection of heartfelt condolence letters to the First Lady show that Texans felt enormous anguish and guilt over the tragedy. But as the years pass, this painful event seems to be passing through a transition from memory to history, as evidenced by Mimi Swartz’s profile of the late Nellie Connally and her account of Dallas’s attempt to quietly celebrate the 50th anniversary of Kennedy’s death.