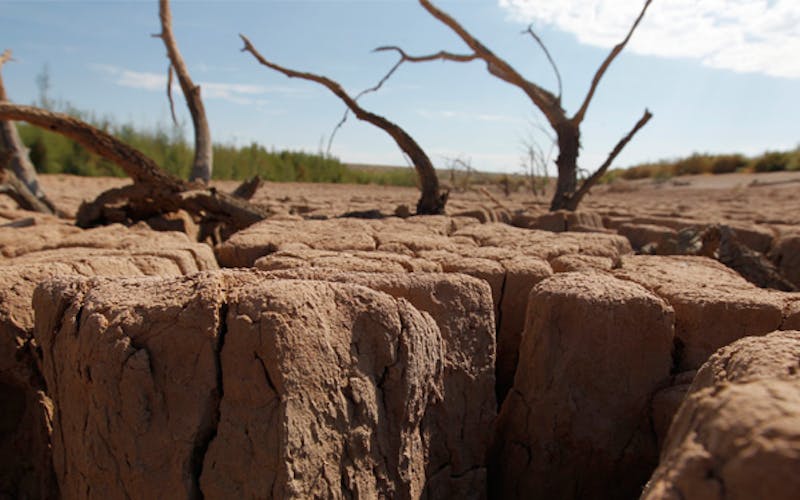 Aside from weather, water is probably the most-discussed topic in Texas (and no wonder, as the two are inextricably linked). Disputes over water—where it comes from, how much we charge for it, who gets it—concern everyone from the governor and the legislature to farmers, ranchers, civilians, environmental groups, and corporations looking to profit off of it. It’s a topic so important that in 2012, after a severe dry spell left the majority of the state in exceptional drought, we dedicated an entire issue that traced the state’s history with water back four thousand years and attempted to look forward to the uncertain future of the resource.

Much of that future hinges on a massive tome dubbed “the water plan.” In 2007, the Texas Water Development Board published a 300-plus page plan, which comes out every five years, that proposes various solutions to keep water flowing to taps. But each region faces its own geographic, climatic, political, and financial issues with implementing the plans, as S.C. Gwynne explained in his 2008 story on the plan.

Texas water law boils down to surface water versus groundwater. Surface water—rivers, lakes, creeks, and streams—is state property; groundwater, meaning aquifers, belongs to the landowners, who are awarded something called the “right of capture.”  In other words—specifically, Joe Nick Patoski’s—as long as an individual owns the land above the water, “he can pump as much as he wishes and sell it to whoever wants it, wherever they are, no matter if he dries up his own water and his neighbors’ along with it.”

The surface water fork of the law is no less contentious. During the massive drought of the fifties, state officials, who are in charge of granting Texans access to surface water, realized they had issued more permits than there was water, spawning a major legal battle.

The scars of that drought and many others that followed can be seen in the state’s deserted ranchland and in the ballooning urban centers to which those ranchers fled. For a population projected to double in the next fifty years while it loses eighteen percent of its ground and surface water supply, working for a livelihood that depends entirely on water, such as ranching or farming, is dangerous.

Particularly affected by the drought was the piece of that population residing in the Texas Hill Country and reliant on the area’s groundwater. Beneath them lies the Edwards Aquifer, a limestone sponge filled with rainwater from the past several thousand years.  Al Reinert describes the way “the gentle ripples and sudden little valleys of the land’s surface are reflected underground in the veins and hollows” of the aquifer; the cool, clear water “trapped between a bedrock floor and a ceiling of impermeable Del Rio clay”; and the strange creatures, like the eyeless catfish, that “have survived and evolved in secrecy for eons.”

Another vital aquifer, the Ogallala, serves as a wellspring for the economy in the rain-deprived Panhandle. According to Helen Thorpe, underlying the battle for water in the Ogallala Aquifer is uneasiness about the state’s changing identity—the dwindling sense of a “more innocent, agrarian past,” and “the friction of shifting demographics.”

The history of water in Texas is one colored by great strife but also by great ingenuity. Scientists and researchers scramble to develop ways to conserve and preserve our water sources, from capturing rainwater and creating more efficient infrastructure to researching how to cheaply desalinate sea water.

Texas’s population continues to grow, creating a thirstier and thirstier state. During the Eighty-third Legislature, lawmakers responded to this expanding need for the precious life source by approving legislation that could spending up to $2 billion on water-supply projects around the state. But funding proposals like new reservoirs and pipelines isn’t a sure thing; voters still need to approve the price tag in November.