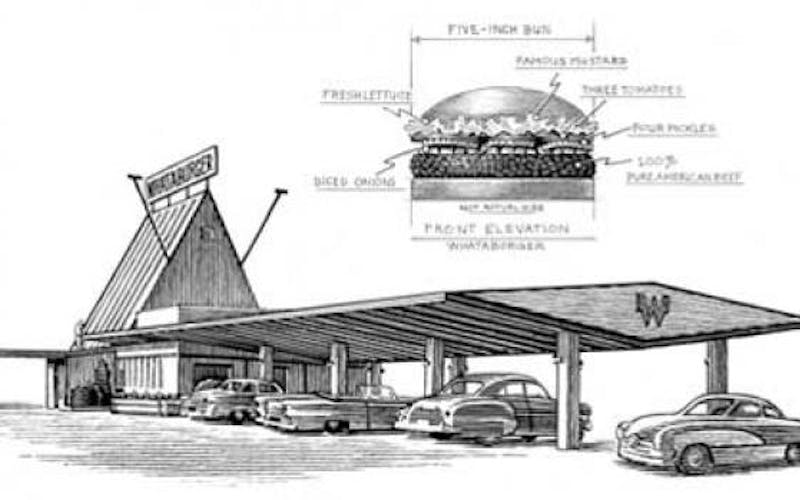 When a Texan hears the words “just like you like it,” his mouth begins to salivate. The phrase elicits images of orange-and-white triangular buildings and larger than average hamburgers wrapped in paper studded with brightly colored stickers that say things like bacon, jalapeño, ketchup. In a nutshell, the sites and tastes of a Texas classic: Whataburger.

In 1950 a man named Harmon Dobson had a dream, a dream to build a burger so tasty that customers would exclaim “what a burger!” after the first juicy bite. He opened up his first hamburger stand that year in Corpus Christi and the rest is gastronomical history. Around the time of the restaurant’s fiftieth anniversary, in 2000, Mark Mazzetti wrote, “over time, Whataburger has evolved into a true Texas icon. The A-frames with orange-and-white-striped roofs can be found in the state’s smallest towns, often where national franchises fear to tread. Talk to anyone who grew up in Texas, and he can rattle off Whataburger stories, from middle-of-the-night visits to morning coffee klatches.”

The icon has picked up a cult following, marked by love letters to the restaurant from displaced Texans wallowing in nostalgia for the memories made under those A-framed roofs. But for those far from a Whataburger or for those who just simply can’t get enough, the Texas staple began selling some of its products in stores and online in 2013.

Although the franchise has expanded to many other states–and Mexico!–Whataburger is a Texas Treasure, an official designation declared by the Seventy-seventh Texas Legislature (one that has been unofficially declared for decades by generations of Texans). As Texas Monthly’s own Wanderer, Jordan Breal, puts it, “a Whataburger is by no means fancy or gourmet. Nor is it the best burger in Texas. But it has a way of hitting the spot exactly when it matters.” And that’s just like we like it.