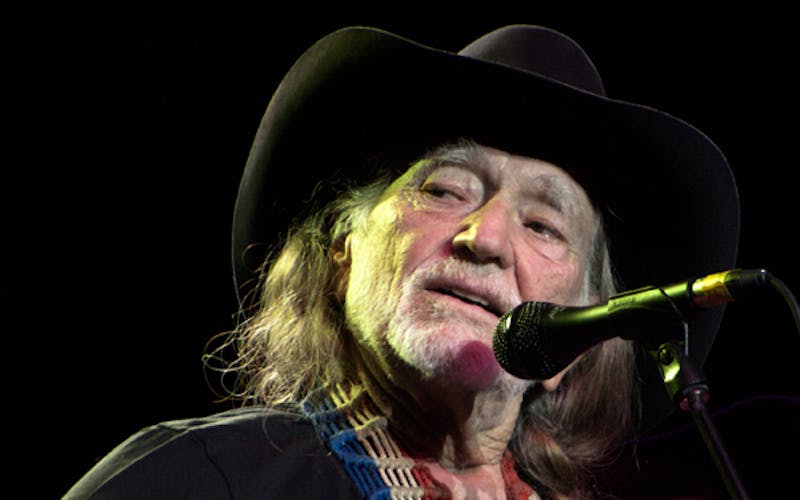 Willie Hugh Nelson, the unofficial patron saint of Texas music, is a country legend who has written more than 350 songs and released more than 100 albums (not counting greatest hits collections). He’s also known for his social activisim, co-creating Farm Aid. But his work with that organization is overshadowed by his support of the legalization of marijuana. (He’s been arrested multiple time for possession of the drug, most recently after being stopped at the infamous Sierra Blanca border checkpoint).

Willie was born in Abbott, Texas, in 1933. He started writing songs when he was five years old, and when he was six, Willie’s grandfather gave him a Stella guitar. The first song Willie learned was “Show Me the Way to Go Home.”

He scored his first gig playing rhythm guitar in John Rejcek’s polka band in West, Texas. He was paid $8. (“The first night that I made money making music, I knew that I had succeeded,” he told Texas Monthly‘s former editor Evan Smith in 2005.) Willie joined the U.S. Air Force in 1950, but a bad back forced him to quit. He briefly attended Baylor University, but dropped out and became a disk jockey, writing songs when he had the time. By the late fifties, he had composed “Night Life,” “Crazy,” and “Funny How Time Slips Away.”

A few of Willie’s songs—particularly “Crazy,” recorded by Patsy Cline, and “Night Life,” by Ray Price—became hits after he moved to Nashville in 1960, where he got a job as a songwriter. Still struggling to make a name for himself, Willie attempted to play bass for Price’s band in 1961. “When we came off the tour the first time,” Price told senior editor Michael Hall for a 2008 oral history, “he said, ‘I bet you didn’t know I couldn’t play bass.’ And I looked at him and said, ‘The first night.’”

Willie’s songs were selling well for other artists, but his own recordings flopped. Contributing editor Gary Cartwright wrote in 1998, “Disillusioned, Willie bought a small farm outside Nashville and determined to be a gentleman farmer-songwriter. He smoked a pipe, wore overalls, raised weaner pigs with fellow musician Johnny Bush, and gained thirty pounds on [his wife] Shirley’s good country cooking.”

After his home in Tennessee burned down in 1970, Willie moved to Austin, where he embedded with the outlaw country music scene. Robert Draper wrote in 1991 that “the man who once wore gaudy rhinestone-and-glitter Nudie suits as one of Ray Price’s Cherokee Cowboys and then took to wearing a poncho after seeing The Good, the Bad, and the Ugly now wore jeans and T-shirts and hair past his shoulders.”

In 1973 he started hosting his famous Fourth of July picnic, and his albums during this decade—particularly Red Headed Stranger and Stardust—contributed to his crossover success.

Willie also dabbled in film, appearing in The Electric Horseman (1979), starring Robert Redford, and Honeysuckle Rose (1980). Willie remained a commercially successful musician, recording songs such as “Always on my Mind” and “To All the Girls I’ve Loved Before.” He also formed a supergroup, the Highwaymen, with Waylon Jennings, Kris Kristofferson, and Johnny Cash.

The generally charmed musician had a spurt of bad luck in 1990 when the IRS went after him and demanded he pay $16 million in back taxes. (Willie retained his sense of humor throughout the traumatic ordeal: “What’s the difference between an IRS agent and a whore?” he’d ask. “A whore will quit f-ing you after you’re dead.”) To pay down his substantial debt, Willie auctioned off assets and released a double-album titled, The IRS Tapes: Who’ll Buy My Memories?

Willie continues to tour regularly, playing Trigger, a Martin N-20 classical guitar he has used since 1969, an instrument so iconic Hall profiled it in December 2012. (Willie also lovingly embraced Trigger on our May 2009 cover, one of nine times he’s graced our front page.)

He was inducted into the Country Music Hall of Fame in 1993, and in 2012, the Country Music Association paid him tribute at the Country Music Awards. Willie is renowned for being an affable collaborator and has worked with Phish, Toby Keith, T Bone Burnett, Ray Charles, Wynton Marsalis, Norah Jones, and most recently—and perhaps most impressively—he convinced Snoop Dogg to croon along with him on “Roll Me Up and Smoke Me When I Die.”