It’s that time of year again.

The Austin Food & Wine Festival is only weeks away, and a lineup made up of extraordinary local and national chefs is about to descend upon our capital. As in years past, the festival has set its sights beyond the city limits, inviting a slew of gifted food and beverage personalities from around nation to showcase their incredible talents. This year’s lineup is perhaps the best yet, with James Beard Award Winners Hugh Acheson and Aarón Sánchez, Austin’s own Tyson Cole and Bryce Gilmore, the ever-jovial Tim Love, Andrew Zimmern, and many more.

To kick off the festivities, Texas Monthly caught up with some of the attending chefs to gauge their views on Texas’s culinary scene, the pros and cons of celebrity chefdom, and the next steps in their careers.

Here, one of America’s most prominent chefs and Texas native Aarón Sánchez talks about his restaurant roots, who should win the James Beard Best Chef Southwest, and his dream career in a mariachi band.

Layne Lynch: When did you first feel the pull towards the culinary world?

Aarón Sánchez: I grew up in that world. My grandmother was a cookbook author and my mom, Zarela Martinez, is a very well-known chef and cookbook author who had a restaurant in New York City for over 25 years. That’s where I got my start, and when I was a teenager, my mom sent me to New Orleans to work under Chef Paul Prudhomme. I’d say that is where I really learned the ins and outs of the culinary world.

LL: How has the Texas culinary scene evolved in your lifetime?

AS: Chefs Robert Del Grande, Dean Fearing, and Stephan Pyles have been the cornerstones of Texas cuisine, and now you’ve got a bunch of younger chefs coming into cities like Austin and making a name for themselves. It’s shifting the center of the culinary scene away from cities like Dallas and San Antonio to Austin, which I see as the center of the culinary scene in Texas.

The options are now much more diverse. It’s not just your standard Chinese take-out place per city. Now there are so many great restaurant options in all of the major cities. Barbecue and Tex-Mex are still the staples, but now you see some great ethnic foods, like the amazing Japanese food at Uchi and the great Mexican food that Chef Hugo Ortega is doing at his restaurant Caracol in Houston.

LL: Looking back, do you think you would have fallen in love with food if you didn’t have family in the industry?

AS: I’m not really sure. My entire family loves food, being in the kitchen, and sharing stories and laughs over a meal. I definitely started having an appreciation for food at a young age from my mom, and it’s hard to imagine my life any other way. I will say, however, that if I wasn’t a chef I’d be a mariachi singer.

LL: What were some of the staple dishes you grew up on?

AS: It’s all my mom’s food! Many of the recipes have been passed down to me and I’ve put my own spin on them. One of the staples I had growing up was my mom’s calabacitas con queso—a cooked-down summer squash with queso blanco and pico de gallo. It was one of my favorites. Also, my mom’s creamy rice, which she served at her restaurant, and sopa seca, which is the ultimate comfort food.

LL: Are there any Texas-centric dishes you still make to this day?

AS: When I think of Texas dishes, I think of chefs like Dean Fearing and Robert Del Grande—the founding fathers of Texas cuisine. I love cooking Dean’s lobster tacos and Robert’s coffee-crusted short ribs.

LL: Having been exposed to both cities, do you think Austin will ever have the same restaurant credibility as a city like New York?

AS: Yes, given time. You have a lot of chefs that are based in Texas that are going out and honing their skills in other locations and bringing those skills back to Texas. Similar to New York, it’s a place where a lot of different people from all over converge, bringing a diversity of cuisine and ingredients to the area. While it’s not quite there yet, I think that it will get there in time.

LL: You’ve been on shows like Iron Chef America and Chopped. Tell us what pulled you to going in front of the camera? And do you ever get used to constantly having to be on cue?

AS: I’ve been on Food Network for over fifteen years, so it’s definitely gotten a bit easier for me as time has passed. I’ve gotten used to having someone cueing me and talking in my ear. The amazing repetition has made it easier for me.

Americans saw great chefs like Wolfgang Puck, Mario Batali, and Emeril Lagasse on television, and I thought it was so great that they got to share their food and their love of food with people all over the U.S., and I was excited to get to the do same.

It’s exciting for me to know that people [all around the U.S.] can get to know Mexican food because they can watch me on television. And it’s awesome that people who don’t live in the cities where I have restaurants still get to experience my cuisine in their own way.

LL: As a chef who has to try a lot of food on camera, what are some food trends that need to be put to bed?

AS: The overuse of truffle oil has got to go! Also gourmet burgers. That’s fine if you like them, but to me a burger is a burger and it should stay simple. There’s no need to get super fancy with it. Also, this whole farm-to-table thing shouldn’t be a trend or a novelty; that’s the way you’re supposed to cook as a chef!

LL: You have a great personal and professional relationship with John Besh. Tell me about what made you choose to collaborate with him on your restaurant Johnny Sánchez. And also, do you ever consider opening a location in Texas?

AS: John is one of my greatest friends. He’s a great chef, restauranteur, and family man. We met while competing on Iron Chef America, and we instantly hit it off. We have common goals: we want to make people happy and love paying homage to the culture of both of our foods.

We also have similar ideas on how a restaurant should operate and food in general, so it’s a natural fit. We’d definitely consider [opening a restaurant in Texas]. I know we’re going to expand, and we’re looking at our options.

LL: What’s the most intriguing dish you’ve pieced together recently, and why?

AS: We recently cooked up a spin on the classic chile relleno dish, but with some twists like huitlacoche rice, picadillo stuffing, and ancho-cream sauce. I like to challenge my chefs at the restaurants to keep authentic flavors and ingredients but put their own spin on them.

LL: The Austin Food & Wine Festival features a good mix of Texas and national chefs. Who are some of the individuals you’re looking forward to seeing or meeting?

I’m also looking forwards to seeing Tim Love—the epitome of Texas and a great guy—Andrew Curren, Rick Lopez, and Steve McHugh. It’s a great line up of chefs, so it’s going to be a great time!

LL: Austin’s culinary scene has received countless accolades over the years, but is there another food city that you credit for their culinary landscape?

AS: Chicago. It has such great diversity in cuisine, awesome Mexican food and some badass chefs like Paul Kahan who are doing really exciting things.

LL: Looking at the Best Chef Southwest nominations for the James Beard Awards this year, who would you like to see win and why?

AS: I’d love to see Steve McHugh or Hugo Ortega [win]. I honestly think that they both truly deserve it. Steve McHugh used to work at some of John Besh’s restaurants in New Orleans and is doing some really awesome things, and Hugo is a pioneer of modern Mexican cuisine in Houston. I also think they are great representatives of their cities.

LL: Who are the Austin chefs you admire at the moment?

AS: Andrew Curren, and definitely Tyson Cole from Uchi. He’s spent a lot of time training in Japan, and I think of him as following in Nobu’s footsteps. He’s not afraid to take from the Japanese culinary foundation and do something new with it. Also, Sonya Cotê and Paul Qui. [Paul] loves to collaborate with others and is always engaging and warm. His food has Asian influences, but the man can cook anything!

LL: What are going to be your top stops in Austin?

AS: Valentina’s Tex Mex BBQ. They’ve got great Mexican food, and I love that they’ve blended traditional Texas barbecue with Mexican flavors. Uchi is another on my list. It’s great food that’s perfectly executed. Uchi represents Western-style Japanese food. I’m excited to go back to the Peached Tortilla, too. 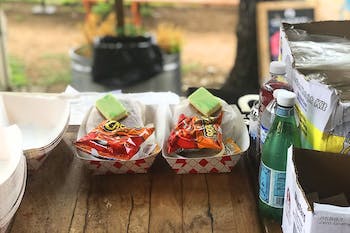