Numerous Texas chefs credit their profound talents to years of hard work in culinary school, rigorous training alongside great chefs, or hours of sweat equity in restaurant kitchens. Great cooking, however, is not a subject that can be summed up in the span of a few short years in the kitchen; lessons usually begin when an individual is too small to even see over the kitchen counter. In fact, our earliest culinary memories usually stem from witnessing, smelling, and tasting food prepared by our mothers and grandmothers. This Mother’s Day, TEXAS MONTHLY spoke with three cooks who say much of their culinary knowledge comes from days of studying their mothers cooking. Eric Silverstein of The Peached Tortilla and Yumé Burger believes growing up in Japan eating street food and his mother’s adventurous Chinese dishes helped develop his extensive palate. Nineteen-year-old Thorne Russell, son of Sonya Coté, says his mother’s work at East Side Show Room and Hillside Farmacy has inspired him to watch and learn from her. Miguel Ravago, executive chef of Fonda San Miguel, was excited to bring the authentic Mexican dishes from his childhood and his mother’s cooking to the Austin culinary scene. Read below to see some of the cooks’ culinary experiences with their mothers. Did your mother teach you how to cook? Thorne Russell: Learning how to cook from my mother was like osmosis for me. I watched her do everything. She told me what she was doing when she was doing it, but that was it. We never did anything that was a lesson, like ‘Let’s make this together!’ I watched her do it, and she would say, “This is the right way to do it.” I now cook every single day and try to make something different every single day. I’m lucky enough where I can have people come over and ask them, “What do you want to eat? What’s your favorite food?” and I can make that for them. I wouldn’t have been able to do that without my mom… She was busy with her chef career when I was a kid, and she couldn’t always be home to make dinner for me. I learned how to make my own gourmet meals, and now I cook for her a lot of the time. Sonya Coté: It’s funny. I didn’t necessarily want to teach him how to cook. I wanted to teach him how to eat, but knowing how to eat usually means knowing how to cook for yourself. Part of raising a kid is making sure they have the skills to take care of themselves.

What did you make for Thorne when he was a kid? Sonya Coté: I got him a weekly produce box from Farmhouse Delivery every Wednesday and bought proteins to stock the fridge. I made him a lot of Italian food that was half-homestyle and half-hippie. We’d go out to eat Asian food a lot when we were in Dallas. Do you want Thorne to be a chef? Sonya Coté: No, I don’t want him to be a chef. I want him to be something like an environmental engineer or do something good for the environment. He is a smart kid. I don’t want him in the kitchen. Thorne Russell: It totally depends. I don’t have a calling to do the stressful line work. I like to work under pressure. I love to cook, and I see it as an art. What culinary influence did your mother have on you? Eric Silverstein: She had a big influence on me in terms of food culture. Food was an integral part of her own family growing up. Whenever we would we would go visit her family, food was always central to those visits. She carried on traditional Chinese cooking methods into our family, so whenever she made meals for us it was usually stuff she grew up eating. What did you grow up eating? Eric Silverstein: I was raised in Japan, and Japanese food culture is one of the most intriguing ones out there. They put a lot of emphasis on quality. I still remember eating street food and at hole in the wall restaurants in Japan. Japanese cuisine is much more diverse than sushi, and we usually think [Japanese food] is just sushi in the U.S. Eighty percent of the rest of Japanese food takes a backseat to sushi here, and I wanted to bring a new concept forward through the Japanese burgers at Yumé Burger. What was your mother like as a cook? Eric Silverstein: She cooked a lot with her own mother. She doesn’t have a culinary degree or anything, but she was a great home chef. Every day was family dinner. There wasn’t one day when we weren’t eating together. And she cooked everything. We would eat a lot of pot stickers, soy-sauce chicken, steamed fish, different noodle dishes, a lot of very unique Chinese dishes, and different stir-fry dishes. She also made something that was almost like a meatloaf, but with steamed pork. What influence has she had on your culinary projects? Eric Silverstein: She had less of an influence on The Peached Tortilla, but when we started Yumé Burger I flew her out here and to be involved with the tastings. She had the Japanese burgers that influenced me in this project when we were living in Japan. How does she respond to your success? Eric Silverstein: She is proud of what I’m doing. I know she follows me more closely than anyone out there. She finds it exciting, but my family comes from the restaurant business. They’ve had their successes and they’ve had their failures, so she is always cautiously optimistic. I get that from her. I want to do a restaurant down the road. It’s always been a dream of mine. To really be considered an icon in Austin, you have to have a restaurant. How has your mother influenced your restaurant? Miguel Ravago: She helped me learn about Mexican cuisine. She would make me taste everything just to teach me about it. We traveled through Mexico a lot, and that’s how we realized each state has a different cuisine in Mexico. That really helped me understand the cuisine… Her and my grandmother helped me when I came to Texas because they knew the cuisine so well. They showed me how everything should taste. It has influenced me a lot. What dishes did your mother make for you? Miguel Ravago: She’s from the northern part of Mexico, so she made a lot of stewed meats, corn tortillas and flour tortillas that were thin like crepes, tamales, and mole. We ate a lot of seafood. She did these great chile rellenos. It was fantastic. I liked her interest in it and her curiosity. That helped me a great deal.  I’m creative because of her. 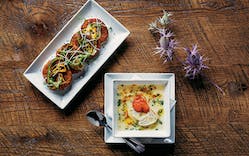