CultureMap Dallas’s Teresa Gubbins reported that well-known and well-liked Dallas chef Randall Copeland, of Restaurant Ava and Boulevardier, has died at the age of 39. The cause of death was unknown, according to a spokesperson for the restaurants.

The bio of the Dallas native on the Restaurant Ava website mentions his long career in the restaurant business in Dallas, starting with the culinary program at Skyline High School and progressing to the Green Room and eventually reaching as far as Las Vegas, where he worked for noted chef Bradley Ogden at Caesar’s Palace.

Returning to Dallas, he collaborated with Graham Dodds on the restaurant Bolsa. He left Bolsa to open Restaurant Ava with chef Nathan Tate and was most recently involved with Boulevardier, another collaboration with Tate. Texas Monthly named Boulevardier one of the ten best new restaurants in Texas in February of this year.

Where You Should Be Eating Right Now: Our Picks For the Dozen Best New Restaurants in Texas 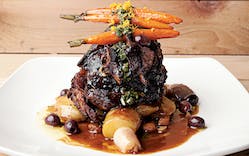 A Conversation with Nathan Tate of Boulevardier