Erin talked with TEXAS MONTHLY about her cookbooks, working with chefs, and why she focuses her attention specifically on H-town’s culinary scene.

I don’t see many city-centric cookbooks. Tell me how you got your start with these books. It began with Houston Classic Desserts, right?

Houston Classic Desserts was the first one. It’s kind of a crazy story actually. Before I got into writing cookbooks, I had an interior decorating and design business. Seven years ago, I put my house on the market and one day the alarm was set off during a showing. When I came home to turn it off, I met Linda Ellerbee and her best friend Kit Wohl from New Orleans, who is also a cookbook author. We became fast friends and I helped Kit through the years from time to time. On a photo shoot with Thomas Keller in Napa three years ago she said, “You take great photos. You love to cook. You should definitely do cookbooks,” and it sparked the idea. I had planned to do desserts, seafood, and it’s just gone from there. I owned and operated a restaurant in Corpus Christi from 1991-98, and it was truly the hardest work I ever did in my life. It was tough, and coming from that background, I have the utmost admiration and respect for everyone that works in this business.

What inspired you to go into the restaurant business at that time?

Like a lot of people, I grew up cooking with both my grandmothers, but the real reason why I went into restaurant cooking was because I unexpectedly found myself as a silent partner in a restaurant in the early nineties. It was only because my husband was a partner in the business. The people that ran the restaurant lived on my rental property across the street from me, but they never paid their rent, so I had to evict them. One day I talked to them and said, “Look, I’ll run the restaurant.” I have been in business for myself ever since I was twenty-one, so I thought I would do just fine at it. Running the restaurant was fun and a key to a bar in your twenties is awesome, but I mainly worked the front of the house at the restaurant. I started studying the restaurant’s recipes and learned how I could bring more recipes into the Mexican restaurant from things I was reading in magazines and books.

Take me through the genesis of your new book, Houston Small Plates & Sips.

I love to go to a restaurant, sit at the bar, and enjoy a few small plates with friends. I have a serious order-envy problem, meaning that I always regret what I order whenever I just get one entree, since everything on the menu almost always sounds so amazing. I clearly have a problem of never being able to decide what I truly want to eat, and the whole small plates movement is great because it allows you to have a few bites of a lot of different foods. To me, that’s much more preferable than ordering one huge entree. In regards to the sips part of the book, wine pairings have been around forever, but the craft beer dinners and cocktail pairings have just recently become popular. I wanted to draw attention to that new trend! 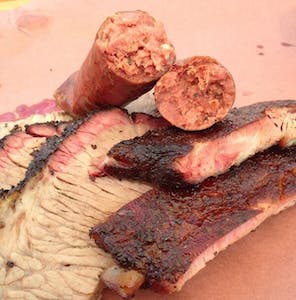 I was wondering if you would tell me how the collaboration process with restaurants works. Do chefs and restaurant owners willingly hand over their personal recipes?

I get asked this all the time. The truth is I just ask the restaurant nicely. I don’t charge the restaurant anything to be featured in my book, and it’s a great advertisement for them. There have been a few times when a recipe will come in and I’ll notice the chef has neglected to include an ingredient or something seems a little off, so I have to test the recipes. I test them again and again until it tastes just right. I also go in for tastings at the restaurants to make sure I’m on the right track, but for most of them, they are absolutely delighted to be featured. There has only been one restaurant in town I haven’t been able to get anything out of yet, but I have a feeling if I could meet with the chef that would definitely change.

If you get a recipe that’s seems to be missing something is your palate able to know right off the bat what that ingredient is?

I don’t have a hard time with it. Just in case my palate isn’t sophisticated enough, I always take a friend with me to tastings. I have them taste whatever I make as well. Once I get the recipes in from the chefs, I get back to them and start asking questions. I’m pretty good at looking at recipes and being able to tell whether something doesn’t seem right. I also Google the same type of recipe and see if something pops up. I like to talk to other chefs and ask them questions too. It’s not that hard to get it right.

Why Houston? Why focus your book on this city?

The culinary scene in Houston is like taking a trip around the world without leaving town. There are great fine-dining restaurants, but there are also little hole in the wall restaurants all over town. Our culinary scene is super diverse and I think we’re beginning to rival a lot of the larger culinary cities in America.