Ahem. If you’ll scroll down to the seventh picture, below, you’ll see that there are only two macarons on the plate. There were initially three macarons, but yours truly grabbed the third one and demolished it in one bite before realizing that I had not taken a picture. Damn! It looked so delicious that I lost my head. That sort of thing—wolfing down your food—will happen to you at the Pass, the newest restaurant from Houston chefs Seth Siegel-Gardner and Terrence Gallivan. Everything is so pretty and clever—mesmerizing, in fact—that it all but begs you to devour it. Yes, you do have a brief “too pretty to eat” moment, but that only lasts about a millisecond. Then you attack it like a starving wolverine. Seth Siegel-Gardner and Terrence Gallivan The Pass, which opened on Tuesday, November 27, is the second half of the oddly named duo, the Pass and Provisions. The first half, Provisions, opened in September, with a casual menu of pizzas, a “ham of the day,” artisanal breads baked in the wood-burning oven. The Pass, the fine-dining restaurant, took a little more time to get ready (they’re located side by side, in the same building). But judging by a five-course sampling yesterday, the wait was more than justified. And word is out. Almost all of the Pass’s 36 seats were booked up immediately for days ahead. If you want to go, plan ahead. 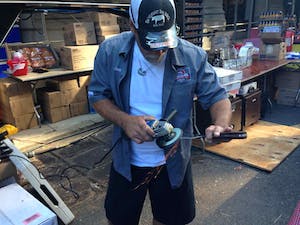 And throw conventional expectations right out the window. Nothing here is predictable. The menu is part of a highly eclectic and original vision of the two young chef-owners, and in my experience, there is really nothing like it in Texas. (Justin Yu’s Oxheart, also in Houston, is equally ambitious and personal, but different.)

My five-course odyssey started with “TRUFFLES: Kaeshi Egg.” Incidentally, the “descriptions” on the menu don’t give you much to go on, which is a trend at a lot of upscale restaurants these days, and I find it exceedingly annoying. Harumph.  Be that as it may, TKE looked like slices of mushroom covered, quite insanely, in some kind of frizzly packing material. That turned out to be shaved Burgundy truffle (a cousin to the black tuffle of Perigord). And underneath the nest was a perfectly poached egg lounging amid a world of Japanese mushrooms: skinny enokis, snowy white matsutakes, crisp maitakes. The egg had been cooked in an umami-rich dashi-based broth. The recommended eating procedure was to break the yolk and swish it around in the secret trove of squid-ink-and-mushroom purée at the bottom of the bowl. The flavor profile vaguely recalled a mushroom omelet from heaven. Honestly, I could eat this for breakfast every weekend. My second dish, “RAW: Nori Bucatini/Tofu/Uni/Clams,” was a little easier to suss out, but the hidden details amazed me. The tofu—which had the texture of a yieldingly soft panna cotta—had been marinated in soy and dashi and cut into a little squared-off log. It was then wrapped up in the seaweed-enriched bucatini pasta. On the side were a gorgeous lump of velvety, coral-colored fresh uni, teeny nubbins of littleneck clams, and a swath of pristine raw hamachi, dressed lightly in a clam-and-citron vinaigrette. Oh, and fresh baby flowers. The whole thing was meant to be mixed up with the accompanying clouds of dashi-apple cider foam. Next came “BREAD: French (onion soup) Toast/Onion Variations.” Personally, I would have called it “ONION.” You want pickled onions? No problem. Onion jam? Sure thing.  How about a purée of onions? Definitely. There is even a crispy dehydrated onion slice stuck on top like a perky feather. And pulling the parts together were the two main elements: a slice of onion bread cooked up like French toast and a stunning caramelized-onion/black-garlic ice cream. Yes, it’s sweet. Yes, it works (black garlic is actually quite mild). Yes, you’ll be licking the plate. Chefs Gallivan and Siegel-Gardner have a thing for mixing sweet and savory elements. This obsession came out in the next-to-last dish I tried. ‘’VEGETABLES: Squash Cake/White Chocolate/Dippin’ Dots” was a total send-up of that old favorite shopping mall ice cream treat,  Dippin’ Dots. Except that here the dots were made from sweetened dabs of vegetable purée (parsnip, celery root, beet, rutabaga, carrot, tarragon) flash-frozen in liquid nitrogen. Chefs love playing with this  stuff.  Underneath it all was the squash cake (think zucchini bread—it sounds better) on a layer of lovely orange curd. But my personal award in the category “most audacious impersonation of another foodstuff” went to “CHEESE: Macarons.” The three bite-sized nuggets looked for all the world like the sweet French meringue cookies that are all the rage these days, but instead they were savory-sweet trompe l’oeil creations filled with cheese. In the first one, a grain mustard macaron was spread with Wisconsin Rush Creek Reserve, a soft cow’s milk cheese that had spent time wrapped in spruce bark. The second was a port wine macaron paired with Grayson cheese, a cow’s milk cheese from Galax, Virginia, that’s often compared to taleggio. The third was a tiny “everything bagel”-flavored macaron paired with Gjetost, the familiar caramelized cream cheese that is popular in Norway. The flavors were decidedly sweet, and at the same time, distinctly, well, cheesy. Bravo! When you eat at the Pass, you can buttonhole the two chefs and ask about anything you don’t understand, because they are not only supervising the kitchen but also serving the food (along with the others cooks and staff). Says Siegel-Gardner, “There is no barrier between the kitchen and the dining room. We have no secrets. You can see everything that we’re doing.” (The name of the place actually refers to the area between a restaurant’s kitchen and dining room, where food is placed to be garnished and inspected before being taken to the customer.) So much is going on with the food that the Pass’s decor is deliberately streamlined, even severe. The walls are bare and white and the (extremely comfy) chairs are covered in slate-gray velvet. A furry little green plant graces each white-clad table, and overhead, industrial lights illuminate the space. The room looks into the open kitchen, like an auditorium facing a stage from a few short feet away. No secrets, indeed.  | The Pass, 807 Taft, Houston (713-628-9020). Dinner Tue-Sat. Prix fixe: five courses $75 ($120 with wine pairings), eight courses $95 ($160 with pairings). Reservations required. Passandprovisions.com