Yesterday, I revealed that I would feature three unique chicken fried steaks on the blog in celebration of Texas Chicken Fried Steak Day. So, who are the lucky honorees? Congratulations to Olivia in Austin, Beaver’s in Houston, and Bone Daddy’s in Dallas. These three Texas restaurants feature some amazing pan-fried steaks. Read further to learn more about the methods and concepts behind their creations. 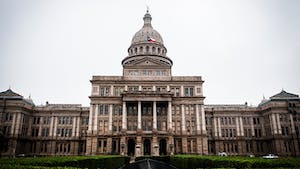 Olivia (Austin) Description: The Willie Nelson Chicken Fried Steak at Olivia is an homage to an unfortunate run-in Willie Nelson had with the law in El Paso in 2010. Look closely at the description: 6 ounces (ahem) of meat, red-eye gravy, herbed smashed potatoes, two fried eggs, and chopped salad with buttermilk dressing. James Holmes (executive chef of Olivia) said he would have contributed a portion of sales to Willie’s legal defense, but that obviously wasn’t necessary. As of now, Holmes has no plans for a Waylon Jennings plate. Method: Take 6-ounce ribeye, pound it out, and begin standard breading procedure. Drop in seasoned fried chicken flour and throw in a wet mix (4 cups buttermilk, 4 eggs, and ¼ cup hot sauce). Drop ribeye in a cast-iron skillet with hot canola oil at 350 degrees. Cook until golden brown; Flip over and spoon hot grease over it. Serve with herbed smashed potatoes: skin on, gold potatoes, whole milk, salt and pepper, and various herbs: parsley, tarragon, etc. Red-eye gravy: Make a medium-brown roux, chicken stock, 1 cup of strong-brewed coffee, ¼ cup hot sauce, couple hits Worcestershire, lots of pepper. Bring to a boil until it becomes a gravy. Use the leftovers for gumbo. Bone Daddy’s (Dallas)

Description: Tender, hand-battered steak topped with homemade gravy and served with garlic & chive whipped potatoes, creamed corn, and a warm cheese roll. Method: Take 6 ounces of cubed steak, pound it out, and season it. Press the steak in seasoned flour and then dip in batter. Coat steak once more with flour and drop in deep fryer until it is golden brown, tender, and floats. Drain the oil from the steak and plate it with mashed spuds and veggies. Top it off with gravy!