This weekend, a group of acclaimed food and beverage personalities will flock to Austin for the third annual Austin Food & Wine Festival, including Allison Jenkins of the newly opened La V in Austin. Below, Jenkins discusses what drew her to Austin, gender stereotypes in the kitchen, and her admiration for Rick Bayless.

Layne Lynch: The Austin food and wine scene is continuing to draw a lot of national attention these days. What’s going on in Austin that’s inspiring such creativity?

Allison Jenkins: For a long time the culinary scene in Austin was all about burgers, barbecue, and Tex-Mex, so there was a wide open landscape. We’re seeing a lot of new people move to Austin from all of the country. That coupled with international interest in this city has created a demand for more than just burgers and tacos. Plus, the restaurant industry is the fastest growing industry in the nation so it just makes sense that Austin would see this great food boom. I love that there’s room for everyone and that people in Austin are excited to try new things.

LL: What drew you to the La V team?

AJ: I had the chance to work with Vilma Mazaite at the Little Nell in Aspen. When I learned of this opportunity brought to her by Ralph Eads, [the owner of La V], it was just too good to pass up. I was ready for a change and saw a real opportunity for growth, so I jumped in and never looked back. I always knew that if I ever came back to Texas it would be to Austin.

LL: What was the vision they communicated to you and how have you translated that to the plate?

AJ: It’s a celebration of the food and wine. It’s a lifestyle. And although the wine program has a strong emphasis on French wines, the French theme didn’t have much bearing on the decision to Provencal-inspired food. To me it was more of a challenge to look at the menu through the scope of that landscape.

LL: I’ve noticed a lot of publications keep pointing out that La V is led by a female team. I’m curious: why do you think kitchens and restaurants are associated as such a boy’s club, and does that stereotype bother you?

AJ: The stereotype doesn’t bother me, but to a certain extent it is true. My advice to women in getting into the culinary field? In any business, you get to where you want to be by networking and there’s no difference here. Get to know your farmers and your purveyors – the people that contribute to the food you make. Also be prepared to work really hard.

LL: Tell me a bit about what you’ll be doing at the Austin Food and Wine festival.

AJ: I wish I could, but I’m still figuring it out! We’ve been so fortunate since opening in March to be extremely busy. The people of Austin have been so great to us and the amount of interest has kept me so busy that I haven’t planned it all out yet. But I can promise a true taste of what guests get at La V!

LL: Are there any AF&W festival exhibitors you admire?

AJ: Rick Bayless. In fact, I almost went to Chicago to extern for him. He was one of the first people to expose me to Mexican and Southwestern cuisine and flavors, which led me to Santa Fe and ultimately guided my career to get me where I am. 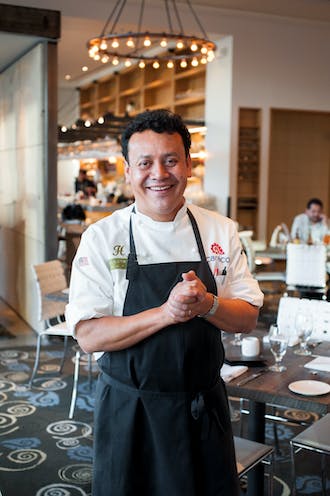