Clear skies and cool breezes provided the perfect conditions for the twelfth annual Buffalo Gap Wine and Food Summit last weekend. Despite its longevity, the festival is perhaps one of the state’s best kept secrets. Officially a Texas non-profit organization founded by Tom Perini of Perini Ranch Steakhouse, the late Fess Parker of Fess Parker Winery & Vineyards, and Dr. Richard Becker of Becker Vineyards, the three-day event is put on every April with a mission to cultivate appreciation of fine wine and food through education and industry discussion.

And though it very well may be one of the best food and wine festivals in the country, it’s also one of the most intimate. Within about 10 minutes of their release in February, the weekend passes are snatched up by a lucky 250 people. (Another couple of hundred are released for a single Saturday event.)

It’s a bucket-list item I’ve been itching to check off, and this year, the Texas stars aligned and I was able to go. As a first time attendee, I expected the standard walk-around tasting tents and quick handshakes with big-name chefs and winemakers. I’m not sure anyone could have prepared me for just how non-festival like this special weekend would be. If there’s a trick to making a gathering of food and wine lovers feel right at home, Tom and Lisa Perini have figured it out. Here are a few of my takeaways from the weekend.

As evidenced by the “Where the Hell is Buffalo Gap,” t-shirt proudly worn by many festival goers, the tiny burg is often lost in Abilene’s shadow. Buffalo Gap, with a population just under 500, is little more than a post office, an old-school grocery and gas pump, and a collection of churches. But with myriad little country stores and weathered barn wood buildings lining its grid of narrow streets, Buffalo Gap has a lot of heart (especially so when the festival rolls around).

There’s no place for “celebrity”

Yes, you’re having your food made by some of the state’s best chefs, but there’s no reason to feel shellshocked. You may find yourself rubbing elbows with Peter Mondavi of the iconic Napa Valley wine family over a plate of braised short ribs or glazed smoked salmon. Or maybe you’ll cut a rug with the father of southwestern cuisine, Stephan Pyles, on the dance floor during an impromptu Prince tribute. Once you cross over the magical railroad line that leads to Perini Ranch, everyone’s your friend, and that includes the bevy of culinary geniuses gathered as the talent. By the end of the weekend, you may was well call them family. 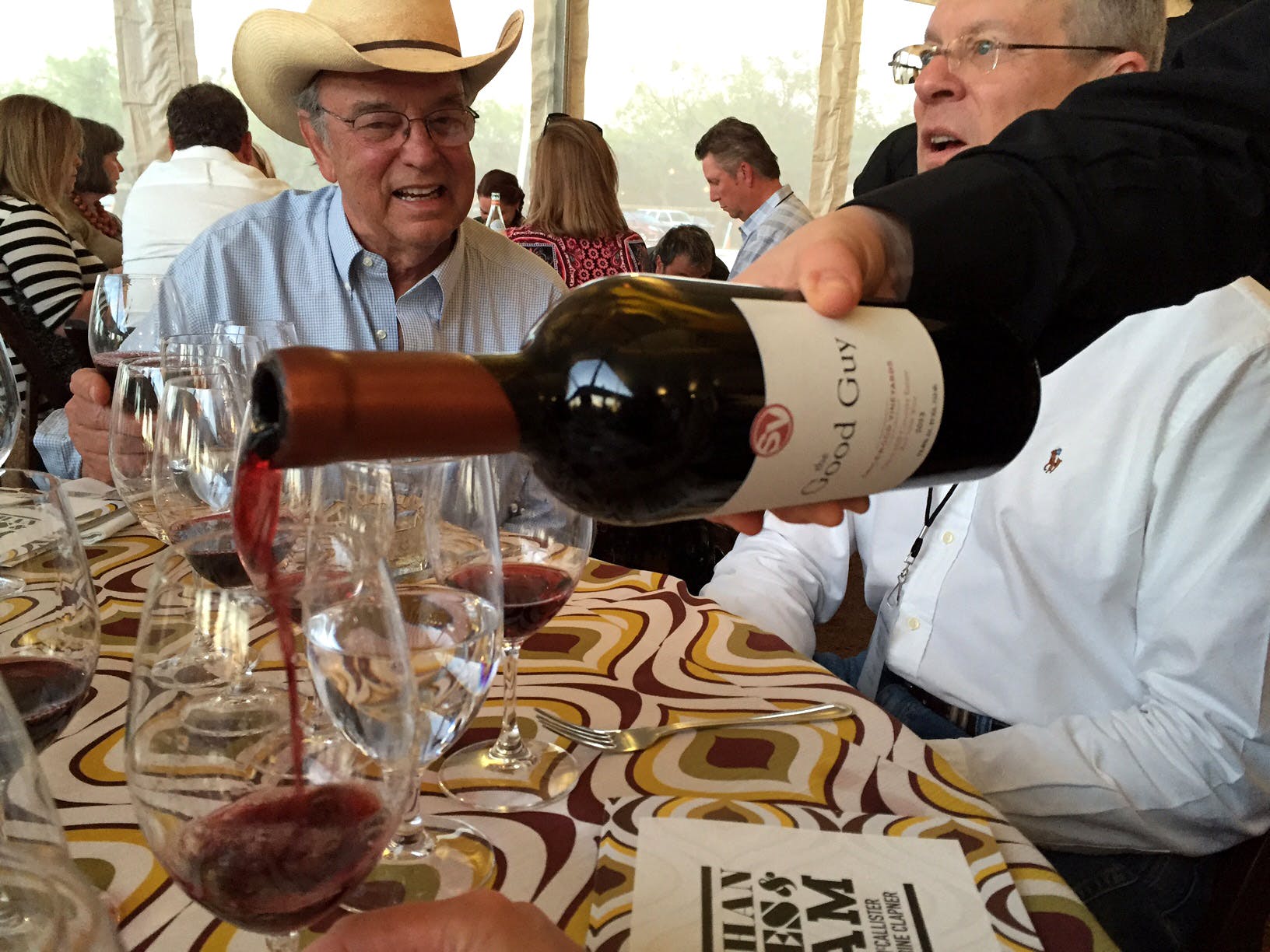 You can find the next generation of food and wine makers

This year’s summit focused on up-and-coming talent, and the lineup of chefs and winemakers on deck proved that there’s a lot to look forward to. Friday evening included a four-course meal from the many superstar chefs who have found success through the kitchens of the James Beard Award-winning chef Pyles. (Think Matt McAllister, Tim Byres, Mark Kiffin, and Katherine Clapner, to name a few.) Following the epic feast, which was paired with a staggering twenty wines, Pyles—the proud papa himself—introduced each and every one of his protégées. Peter Mondavi, Jr. led the team of winemakers from the next generation, many who are writing the next chapter in the Texas wine legacy, including Spencer Igo of McPherson Cellars and Ron Yates of Spicewood Vineyards. Ian Stout, son of Master Sommelier Guy Stout, was there to reveal his first Napa label under Stout Family Vineyards, and Caroline Perini was on hand showing off her father’s influence on her life as owner of the hip Dallas food truck Easy Slider.

Guy Stout serves the best Saturday breakfast on the planet

As festival-goers roused from Friday night slumber and made their way to a breezy white tent on Saturday morning, it was clear that their palates wouldn’t be slumbering long. Master Sommelier and Director of Beverage Education for The Glazer’s Family of Companies Guy Stout had selected 22 wines to sample, all in celebration of the weekend’s focus on France’s Rhône Valley. Along with the nearly two dozen wines each person could taste, Stout had lined up a panel of winemakers to discuss each of their wines—a pretty engaging way to understand an iconic region of France and the other regions who are successfully emulating its wines including Napa Valley, Paso Robles, and Texas. Many attendees agreed that trading their morning cup of joe for a glass of swirled wine made for a stimulating breakfast, indeed.

Texas wine is on par with other worldly greats 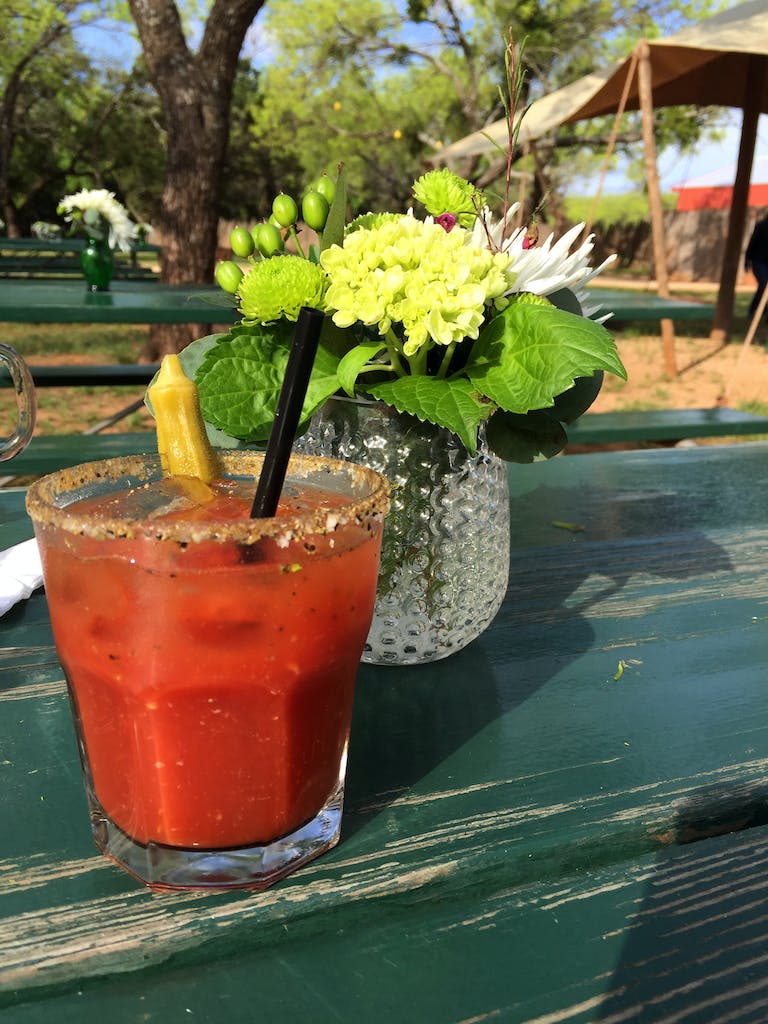 Perhaps the most intriguing in the mix was a first-ever Texas orange wine from Brennan Vineyards. It’s a style of wine traditionally found in Eastern Europe and Italy that’s made from white wine grapes that macerate the juice with their skins for a period of days to impart a richer texture and often an orange tint. Winemaker Todd Webster tried his hand at this growing trend and passed with flying colors.

It’s worth noting that Texas beers and spirits also played a role in Saturday’s walk-around tasting, which was held under a grove of oak trees lit by strings of white party lights. Pedernales Brewing Company and the new Duckworth Vodka served up a Bloody Mary with truffle-infused vodka that had me saying, “Good golly, miss Molly!” (Or perhaps that’s just what the live band was playing for the throng of people on the dance floor when I first tasted the savory cocktail.)

Following a lazy Sunday chuck wagon-style breakfast of egg casserole, fresh fruit, and the best cast-iron buttermilk biscuits I’ve ever come across, I had to bid farewell to the Buffalo Gap Wine and Food Summit. The only thing left to do was wash down the memories with a spicy Bloody Mary and hit the road. But I have no doubt that I’ll be back in Buffalo Gap next spring.