Calling Houston “one of the country’s most exciting places to eat,” Wells praised Justin Yu’s Oxheart and Chris Shepherd’s Underbelly.

Both restaurants have been conjuring up a lot of local, statewide, and national media praise in recent months. Texas Monthly‘s own Patricia Sharpe included Oxheart  and Underbelly as two of her Pat’s Picks last year.

Below are a few of the notable quotes from the review. (To read the whole piece, visit the New York Times dining section.)

Oxheart is one of the growing number of places around the country that are rearranging our notions of what fine dining means. It is also an example of the growing ambition of the Houston dining scene, and one of two places that lured me here to kick off this occasional series of reviews of restaurants outside New York City.

Utility Research Garden supplies the carrots for an Oxheart dish that makes use of several varieties of them at different stages of life. Some are shaved and sprinkled with two kinds of coriander leaf; others are roasted and set in a sauce made with coconut milk, Moroccan spices and even more carrots. From this one humble root, Mr. Yu had extracted fleet, herbaceous flavors; deep, meaty ones; and several others in between that I never knew carrots had in them.

Some things about Oxheart… reminded me of other new restaurants that emphasize the personal and the handmade. The naturalistic look of Mr. Yu’s dishes, too, is familiar. But every course of my meal showed an instinct for the delicious that is rare in any city. Encountering it, even in a restaurant as often praised as Oxheart, is always a discovery.

Not all of Mr. Shepherd’s cooking coincides with how outsiders see Houston. He isn’t fixated on enchiladas and steaks. But his tributes to the city’s more recently arrived Asian populations were among the most memorable things I ate at Underbelly. He has an absolute winner in his Korean braised goat with dumplings. He must know it, too, because the dish has not gone off the menu since Underbelly opened a year ago…

I loved some of Underbelly’s ‘non-fancy desserts,’ like a tender half-moon fried strawberry pie and a wedge of vinegar pie, a relic of a recipe from an age when lemons weren’t sold year-round.

Most of all, I respected Underbelly’s confidence in deciding which native traditions to champion. 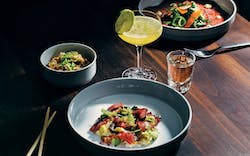 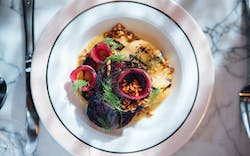 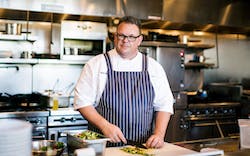 Chef Chris Shepherd Talks About Houston, Harvey, and His Obsession with Hummus

Eat Well Wherever You Are