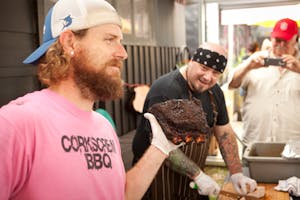 The wait is over! Sway – a contemporary Thai restaurant on South First Street in Austin – will open its doors on December 9. For those who haven’t followed news about the much-anticipated restaurant, Sway was originally supposed to open this past summer. For over a year now, the La Condesa team has been releasing tidbits of information about the top secret project. Over the past few months, individuals learned a myriad of details about the restaurant, including the name (Sway, meaning elevated, delicious) and a few of the menu offerings.

The inspiration behind Sway stems from Rene Ortiz’s time of living and working in Sydney, Australia, where he first encountered the modern Thai food movement. Ironically, La Condesa’s owners – Jesse Herman and Delfo Trombetta – also lived in Australia for a time where they too were exposed to the same innovative cuisine. Back in July, Pat Sharpe and I were invited to try some of the eclectic dishes on Sway’s menu, and even then I believed Sway would become one of the most respected restaurants in the Austin culinary scene – when it finally opened, that is. Here is some of what Pat said about the Sway experience… “As anyone who’s eaten the interior Mexican cuisine at La Condesa knows, Ortiz takes considerable and tasty liberties with traditional recipes. Sway will be no different. A sampling of six dishes from the fifty-odd on the menu was notable for completely avoiding the sweet, spicy, coconut-milky profile of so many Americanized Thai restaurants…” Some of the dishes to look forward to on the Sway menus include Jungle Curry (red curry of chicken with eggplant and French beans); Rose Apple Stir-Fry (chicken with shiitake, holy basil, and red chili); Steamed Yuzu Pudding Cake (drunken berry, coconut, Sichuan pepper meringue, and avocado sorbet); Jasmine Tea Panna Cotta (lychee, grape, Thai basil, cilantro, and coconut lychee sorbet); and numerous other Thai-inspired offerings. Reservations are only accepted for parties of eight or more, the family-style feast, or the signature Moo Sway menu. Visit the restaurant’s website, Twitter, or Facebook for information on menus, hours, etc.