Enjoying his fifteen minutes (hours, days, whatever) of fame, self-declared “BBQ Snob” Daniel Vaughn is in Austin today hanging out with the big dog, Anthony Bourdain, of the Travel Channel’s “No Reservations.”  They’re  seen here at Franklin Barbecue, along with Vaughn’s photographer Nicholas McWhirter, Vaughn’s book agent David Hale Smith, The Tony, and Daniel. (For the record, Vaughn is Texas Monthly’s barbecue partner, which means he writes on the barbecue page of our web site  and will be working with us on our next top-fifty barbecue joints story in 2013—although at the rate he’s going, we will be basking in his glory.) Bourdain’s imprint Ecco Publishing has optioned Vaughn’s book-in-progress, to be entitled Prophets of Smoked Meat. Vaughn has already declared his love for Franklin Barbecue in his  Full Custom Gospel BBQ  blog (and who hasn’t fallen in love with Franklin’s  celestial brisket?—Aaron Franklin was the newcomer of the year at the second annual Texas Monthly BBQ Festival in 2011 and Bon Appétit named it the best barbecue in the country or maybe it was the galaxy or the universe, I can’t really remember). What did Bourdain think: “Un-f*cking-believable,” quoth he, during his SXSW panel on interactive media this afternoon, right after eating at Franklin. Apparently they’re also going to Austin’s  JMueller BBQ at some point, although the timing of that little excursion is probably a more tightly guarded secret than the arrival of Barack Obama to visit troops on the other side of the world. (Photo lifted from Vaughn’s Twitter feed; thanks to Side Dish blog for photo  IDs.) 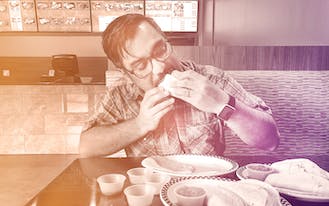 A Barbecue Editor and a Taco Editor Walk Into a Taqueria…. 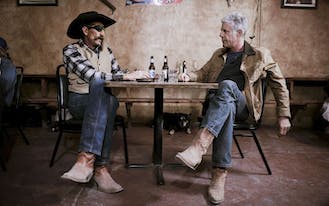 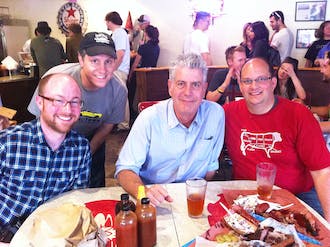 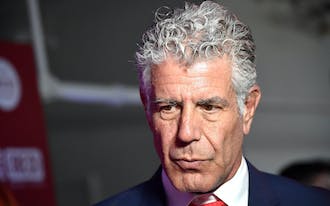