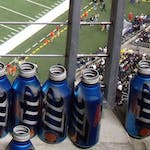 Get your general admission tickets to the Texas Monthly BBQ Festival on Wednesday, starting at 10 a.m. But if you are in or around Austin, we can also feed you sooner.  Come downtown at lunchtime for the final TM BBQ Hunt, where we’ll pick four winners in a random drawing. One person will score a pair of tickets to the festival, but the real prize, as ever, is meat. The final hunt haul will be brisket, from a truly celebrated joint that you might say has just 1/6th the line of Austin’s Franklin, without it being any less in demand. Along with the festival itself, this will be a rare chance to forego the early morning wake-up and a 50-mile drive. Could we make this any easier to guess? We’ll officially announce the restaurant, and more importantly, exact location, Tuesday via Twitter (@tmfood or @texasmonthly). UPDATE: The hunt is on at 2nd and Lavaca in downtown Austin. Wednesday, August 10th. 12:30. With brisket from the legendary Snow’s.