Clever puns are to Austinites what baker’s yeast is to bread: an essential ingredient that never fails to get a rise out of the crowd. (For example, the annual O. Henry Pun-Off, in May.) But sometimes, the puns go a little sour. That seems to be the case with two trucks in town: Coat and Thai and Naan Stop. But how did the food compare to the wit at these punning Asian trailers?

At Coat and Thai, I started with the pork dumplings. Served scaldingly hot, they were above average, with tender pork centers and slightly doughy wonton wrappers, served with a dark soy dipping sauce. The red curry was surprisingly rich and a little spicy, its broth thick with coconut milk. I liked the flavorful zucchini, bamboo shoots, and bell pepper, but the chewy shrimp lacked flavor. The concept of the trailer — a homegrown Asian restaurant owned and operated by Austin musicians — is appealing, and it’s hard to beat a South Congress location with picnic tables. The only real disappointment with my lunch was the overly sweet pad thai. A good pad thai has a complex flavor. The rice noodles are soft and rich, the meat is fall-apart tender, the stir-fried egg is a nice surprise, and the sauce is sweet with a generous kick. Sadly, Coat and Thai’s version was one-dimensional and dry. 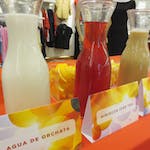 Just as a Thai restaurant’s fate lies in its pad thai, an Indian restaurant’s rests in its naan. Naan Stop’s was soft and thick, with a generous dusting of flour. It was missing some fluffiness as well as the crispiness from a tandoori oven, but I saw said oven in the trailer and, given the blazing temperature outside, was impressed. Based on its downtown Red River location (and the, um, partiers that go with the territory), Naan Stop serves mostly to-go wraps and other handheld foods. The samosas had a nice flavor, although the overall texture was mushy. But dipped in the made-from-scratch cilantro chutney, they were a perfect late-night snack. I also loved the sweet tamarind chutney, made fresh with coriander and cumin. Same for the variety of naan wraps: the spicy (and I mean spicy!) chickpeas (i.e., chana masala) were great, and the shredded chicken wrap had a nice flavor as well. I also liked the chicken tikka masala, with big, tender chunks of chicken in a tomatoey sauce, although the sauce itself lacked the creaminess of a traditional tikka masala. So what’s the problem? I didn’t order the chicken wrap, but I did ask for a keema naan plate that never arrived, despite repeating my order multiple times. I wish I could say that it was because they were busy, but I was almost the only patron while I was there. To their credit, the husband and wife team just opened Naan Stop less than a month ago and were incredibly friendly and nice. I have faith that the kinks will be worked out in the coming weeks. Confession time: I kind of like the name “Naan Stop,” anyway. Coat and Thai: SoCo Food Court, 1603 South Congress (512-970-2154). Call for hours. Naan Stop: Twin Liquors parking lot, 519 E. 7th (512-537-6226). Open Wed–Sat 7:30–3 a.m. Closed Sun–Tue. Posted by Megan Giller. To read more from Megan Giller, visit her website at www.megangiller.com

The Changing Face of Veganism