The Trans-Pecos and North Dakota Access pipelines have garnered a lot of headlines over the past year or so, but with both of those projects now pretty much complete, the next big pipeline battle may be over the proposed expansion of the Trans Mountain pipeline in Canada.

And again, a Texas-based company is behind that project. In November, Canadian Prime Minister Justin Trudeau approved an expansion project by Houston energy company Kinder Morgan that would nearly triple the capacity on its Trans Mountain pipeline, which stretches from Edmonton, Alberta to Burnaby, British Columbia (here’s a map if you’re not up on Canadian geography).

It’s a truly massive endeavor. The plan would add more than 600 miles of new pipeline, allowing Trans Mountain to carry 890,000 barrels of oil per day. To put that in perspective, that’s more barrels than both the Keystone XL and Dakota Access pipelines carry, and it’s enough oil to meet 4 percent of our daily gas consumption here in the United States, according to Seattle’s NPR affiliate KUOW. The project is expected to cost a whopping $7.4 billion.

The expansion would be a huge boon for Canada’s oil industry—it is expected that it would dramatically expand the nation’s oil exports and open up access to key Asian markets. In late March, Kinder Morgan said it had already contracted all available long-term capacity on its expanded pipeline to about thirteen customers, according to Reuters, and if all goes well, the expanded pipeline could be up and running by 2019.

But the project has already run into problems. Kinder Morgan is facing over eighteen legal challenges aimed at halting the expansion, according to the Toronto Star. Along with the usual anti-pipeline arguments focused on climate change and oil spills, environmentalists also say that the pipeline would have a detrimental effect on endangered killer whales in the Pacific waters off the coast of Vancouver, since it is expected to increase oil tanker traffic in the port at Burnaby by about 29 ships a month, according to CBC. The cities of Burnaby and Vancouver have each filed lawsuits against the federal government, and a handful of Canada’s First Nation tribes have also sued the Canadian government on the grounds that they were not properly consulted before the project was approved. In early March, 122 First Nation tribes signed a treaty urging TD Bank, an adviser hired by Kinder Morgan in February, to divest from the expansion project. Protestors took to the streets outside the bank’s headquarters in Toronto last week.

The opposition from Canada’s First Nations seems to be emboldened by the protests of the Standing Rock Sioux that nearly succeeded in stopping the Dakota Access Pipeline project. Only this protest movement could be even bigger. “This is not just our backyard, this is literally in our kitchen,” Charlene Aleck, a councillor with the Tsleil-Waututh First Nation, told CBC shortly after the Trans Mountain expansion project was approved by Trudeau in November. “It’s definitely the beginning of a long battle ahead for us.” According to the Seattle Times, one Canadian environmental activist group has already trained 1,000 activists in preparation for large-scale protest actions.

Despite the looming protests, the Trans Mountain expansion project has the complete support of the liberal Canadian government, and as of January about 51 First Nations communities had signed mutual-benefit agreements with Kinder Morgan, which allows $400 million to be shared between them, according to the Globe and Mail. Should massive protest camps similar to Standing Rock ultimately pop up along the pipeline, it remains to be seen how Trudeau would respond. But it would not mark the first time a Texas energy giant faced fierce opposition over a pipeline project. 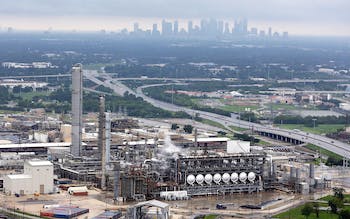