According to a report released today by the U.S. Energy Information Administration, Texas led the nation in energy consumption in 2015 (the most recent year data was available), maintaining a streak that we’ve boasted for the fifty-fifth year, since 1960. 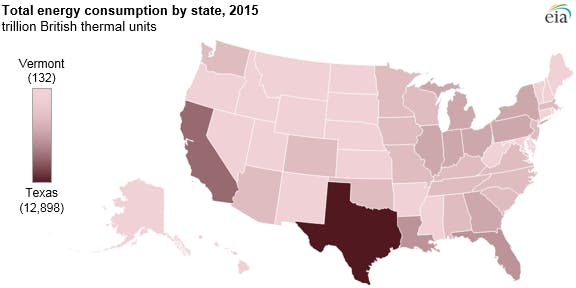 The report, which ranks all fifty states on their consumption, has some staggering statistics in it. Did you know that Texas consumes nearly one hundred times as much energy as Vermont? Or that Texas accounts for nearly 13 percent of the energy consumed in the U.S.? Or that California, whose population is 12 million higher than ours, uses only 60 percent of the energy we do? Now you’ve got some energy facts to pull out at parties.

Of course, these aren’t statistics that tell the whole story of energy consumption in Texas. That’s an awfully deep shade of Aggie maroon for Texas on that map up there, but that’s not the only way to visualize consumption habits across the U.S. For instance, if you look at the per capita usage, things are a bit lighter here: 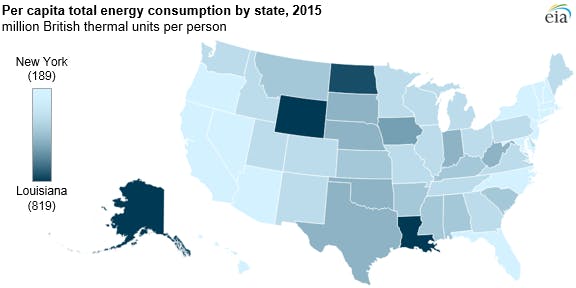 When it comes to energy usage adjusted by population, Texas does considerably better in being conservation-minded. According to the EIA’s analysis of the state from January, we’re in the bottom 20 percent of states for residential energy consumption per capita. (We appear to be somewhere in the middle of the pack according to the blue map above, but this map illustrates the combined tally of residential, industrial, commercial, and transportation usage, not residential alone.)

More than half of the energy consumed in Texas is for industrial use, according to the EIA, while residential use—which in terms of sheer BTUs is the most in the nation, even as our per capita usage is relatively low—accounts for just over 13 percent. Transportation accounts for nearly a quarter, while commercial comes in slightly lower than residential.

The energy sector itself uses a portion of this industrial energy allotment to generate power, which is to say the energy that Texas consumes gets put back out there. Texas is largest state that’s a net exporter of energy—while states like California, Florida, and New York are importers. 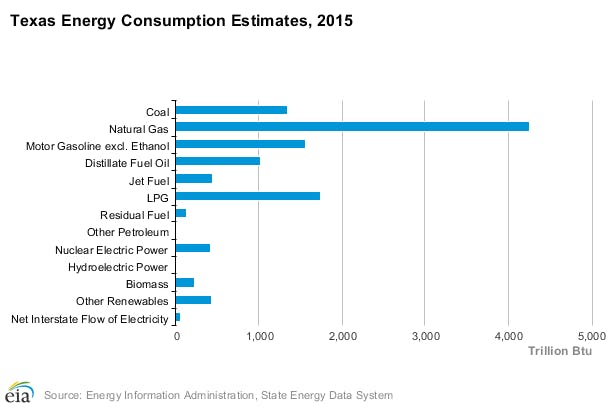 In Texas, as in most states that aren’t Washington and Oregon, nonrenewable sources outpace renewables considerably in terms of the amount of energy they provide. However, the winds of change are blowing there: in the first quarter of 2017, according to Scientific American, wind energy (which provides almost all the renewable energy that Texas generates) accounted for almost 23 percent of the power in the state. That’s up from just 10 percent in 2010, and 3 percent in 2006. So while much hasn’t changed since 1960 in terms of where Texas ranks in energy consumption, the nature of that power is shifting.