Gas Prices Coming Back Down

The post-Harvey spike in gas prices may not have led to actual fuel shortages, but it did cause prices to spike for legitimate reasons: ten days ago, the price at the pump averaged over $2.50 a gallon, up more than forty cents from the cost before the storm, as a result of reduced capacity at Texas refineries. Those refineries are getting back online now, and prices in Texas (and around the country) are coming back down to earth as a result. Granted, there’s still a long way to go before they reach the $2.10 per gallon they were at prior to Harvey. Right now, prices in Texas are only down to an average of $2.45 a gallon (which is still about a dime cheaper than the national average). Still, they’re trending in a consumer-friendly direction now, and the pattern of gas prices spiking immediately after a major event, then taking months to come back down, is a familiar one to anyone who’s owned a car for a few years.

In the non-gasoline arena, Tesla appears to be considering a new manufacturer for the AI chips that’ll be powering its self-driving cars: AMD, the California-based company with a massive Austin presence. That’d be a bit of a coup for AMD, as Tesla’s plans for autonomous cars are even more aggressive than its competitors: CEO Elon Musk has vowed to put the technology in vehicles available to consumers by 2019. Right now, of course, all of this is unofficial: an AMD exec who works in chip fabrication, speaking at a conference in California, mentioned Tesla as an example of a company that AMD’s fabricators were working with. AMD’s stock price spiked at the suggestion, and AMD promptly walked it back, saying that the exec, Sanjay Jha, hadn’t specifically claimed to be working with Tesla. Still, CNBC’s sources are confident that the chips will be coming from AMD, which suggests that the company—in either or both of its Austin or California locations—will be getting busy in the transportation world. (Tesla, for its part, declined to comment.)

As governor of Texas, Rick Perry was a fan of renewables, but as Secretary of Energy, he’s been rather more skeptical. (Last month, the long-awaited grid study from his DOE argued in favor of coal and fossil fuels.) Still, if the federal government is heading in the direction of advocacy for less clean energy sources, we suppose it’s good that Perry’s at least also interested in technologies that might mitigate their carbon output. To that end, he announced this week a $36 million investment in carbon-capture technologies, focusing on scaling those technologies to engineering scale and designing and testing commercial-scale capture systems. This is a major increase in funding from the DOE in carbon capture, which was previously funded by the department to the tune of just $2.75 million. And the technology—which, if it worked, would remove greenhouse gases from the atmosphere and store them safely somewhere—would be a big part of any way to fight climate change. (There is, of course, a big question mark regarding whether or not the technology is actually viable.)

Here’s a cute one: the East Texas city of Nash, just outside of Texarkana, is home to a newly-opened Phillips 76 travel center—the largest of its kind in the state, worth nearly 250 jobs to the Bowie County town. To celebrate that opening, they held a special this morning, selling gas at just 76 cents per gallon for an hour, between 10 and 11 am. That’s a pretty rare price for gas—the national average hasn’t been under $1/gallon since 1988 (although drivers in Texas could find it under a dollar through the late nineties), and the last time it was under $0.78 per gallon, Jimmy Carter was president of the United States. 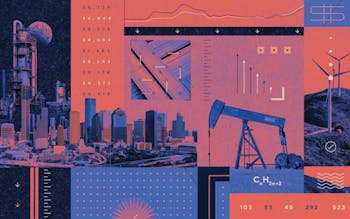