The Senate confirmed Rex Tillerson as Secretary of State, a pipeline ruptured north of Dallas, and Home Depot invests in wind energy. Here are a few of the biggest headlines in Texas energy this week.

Rex Tillerson Confirmed as Secretary of State
Texan and former chief executive of ExxonMobil, Rex Tillerson, became Secretary of State on Wednesday. The Senate confirmed his nomination with a 56-to-43 vote, and the former oil executive-turned-America’s-top-diplomat will now be playing a major part in carrying out Trump’s foreign policy.

Before his confirmation, Tillerson came under fire for his business ties to Russia and Vladimir Putin, and for having publicly denounced sanctions against Russia that reportedly lost Exxon hundreds of millions of dollars. Tillerson’s wavering opinions on climate change also came under scrutiny, as Exxon is being investigated for lying about its climate change findings in several Democratic states.

Tillerson is a political outsider like his new boss. He graduated from the University of Texas at Austin with a degree in engineering and has never worked as a politician or diplomat, but Tillerson’s supporters point to the vast international experience he gained at Exxon, where he began working in 1975, as burnished credentials for the job. His foreign policy to-do list is expanding every day, from managing repercussions of President Trump’s recent executive order that includes restricting immigration from seven predominantly Muslim countries to renegotiating the United States’s nuclear deal with Iran. It remains to be seen what issue will be tackled first.

Tillerson did, however, address the employees of the State Department earlier this week, and discussed the missions of the agency. He acknowledged the political division in the department, but, he stated in his notable Texas accent, “we cannot let our personal convictions overwhelm our ability to work as one team.” He set three core principles for the department: accountability, honesty and respect.

Whatever issues Tillerson takes on first, there’s no doubt that the world will be watching to see how he manages one of the most important roles in American government.

New Texas Bill Would Protect Exxon
This week state representative James White (R-TK) proposed a bill that would prevent a defendant’s views on climate change from being used as evidence during certain criminal cases. According to the Austin American-Statesman, White drafted the bill as a reaction to investigations by several different state attorney generals into ExxonMobil. AGs from New York, Massachusetts and other states claimed the company lied about the threat of climate change to both the public and its investors. White’s bill would protect Exxon in Texas, but it would not affect cases in other states including one in Massachusetts that is requesting Exxon release decades of internal climate change research and documents.

Home Depot invests in Texas Wind Energy
Home Depot is investing in West Texas wind energy by partnering with Houston-based EDP Renewables North America, which currently operates 41 wind farms across North America. For the next 20 years, Home Depot will be buying 50 megawatts of energy annually from EDP Renewables’ Los Mirasoles wind farm located in the Rio Grande Valley. That’s one-fifth of the farm’s current annual production of 250 megawatts. To put that into context, one megawatt can power approximately 500 to 1,000 homes depending on the climate. This partnership is a part of Home Depot’s plan to invest in 135 megawatts of renewable energy by 2020.

Protests in West Texas Grow
Protesters are continuing to gather in opposition to the Trans-Pecos Pipeline that carries natural gas through the Pecos, Brewster, and Presidio counties in West Texas. The Trump Administration pushed forward the construction of two other pipelines, the Dakota Access Pipeline and Keystone Pipeline, last week. Those executive orders didn’t discourage the growth of protests in the Big Bend Ranch State Park area, which began in 2015. The Trans-Pecos Pipeline is a project of Dallas-based Energy Transfer Partners, the company that is also behind the construction of the Dakota Access Pipeline. Protesters include a combination of environmentalists and ranchers who own land across the three counties. Construction of the pipeline began in May 2016, but protesters told Texas Monthly that with support they can still combat the completion of the pipeline and fracking in the region.

Oil Line Ruptures North of Dallas
An oil pipeline north of Dallas ruptured after a contractor for the Texas Department of Transportation punctured the 30-inch wide pipe. The spill closed down State Highway 121 as oil sprayed onto the road. According to local news, it’s not clear how much oil spilled out of the ruptured line, but as of Wednesday about 4,000 barrels of oil had been recovered. The Seaway Pipeline annually transports 400,000 barrels from Oklahoma to the Gulf of Mexico. No water resources have been affected by the spill, but a dam is being built to prevent any oil runoff from making its way to a nearby creek. Following the accident, the pipeline was immediately shut off and oil prices also rose as a result. 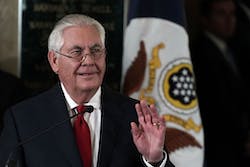 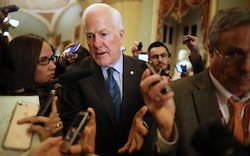 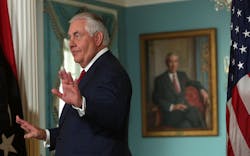 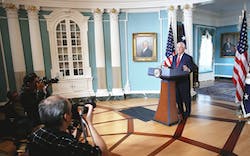 Amid Reports He Called Trump a Moron, Rex Tillerson Announces He’s Not Resigning