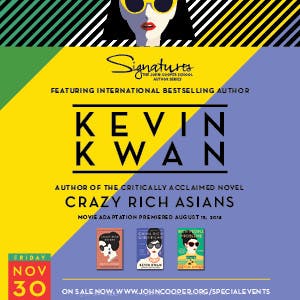 The John Cooper School Fine Arts Council has announced that internationally acclaimed bestselling novelist Kevin Kwan is the featured speaker for the 14th Annual Signatures Author Series that brings high profile authors to The Woodlands each year.
Kwan’s critically acclaimed debut novel, “Crazy Rich Asians,” became an international bestseller and the major motion picture version, a romantic comedy, was released by Warner Brothers Studios on August 15 and is breaking box office records. The sequel of the book, “China Rich Girlfriend,” also became a smash hit around the world, and the final book in the trilogy, “Rich People Problems,” was released in May of this year. Time Magazine recently named Kwan to the 2018 TIME 100, its annual list of the 100 most influential people in the world.

The 2018 Signatures luncheon will be held on Friday, November 30 at The Woodlands Waterway Marriott Hotel and Convention Center. The event also features local authors, book signings and a VIP book signing with the author for major table sponsors. Pre-lunch events begin at 10 a.m. and the keynote portion begins at noon.
Reservations and sponsorships are now on sale online on our website. Sponsorships are available at $5,000, $3,500 and $2,500 levels. Individual reservations are $150 each. Applications to participate as a visiting author are being accepted through September 30. For more information call 281.367.0900 ext. 2441 or go to our website.