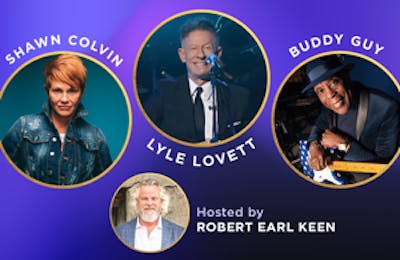 Lone Star troubadour and renowned party-starter Robert Earl Keen hosts this historic evening to recognize three beacons of American music: singer-songwriting legends Lyle Lovett and Shawn Colvin, and blues giant Buddy Guy! More information about performers, presenters and additional guest stars will be announced prior to the event. Musical highlights and inductions from the ceremony will air as a special on PBS later this year.

In 2014, KLRU—creator and producer of the legendary PBS show Austin City Limits—established the Austin City Limits Hall of Fame to celebrate and recognize the legacy of legendary artists and key individuals who have played a vital part in the pioneering music series remarkable 45 years as a music institution.