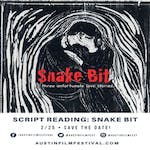 Three unfortunate love stories. All darkly comedic, and all to be played by the same two actors. In each tale, a man and woman are alone and desperately trying to survive both the elements and each other. In the first story, Jim Ed has dragged his reluctant terrified wife Susanna out into the remote Texas swamp for his latest get-rich-quick scheme — snake hunting. In the second story, Trapper is forced to set out into the cold, harsh turn-of-the-century Alaska wilderness to literally trap his runaway wife Judith. And in the third story, Cody and Grace find themselves alone and confined in a precarious place on the eve of their bitter and contentious divorce. Three unfortunate love stories indeed.