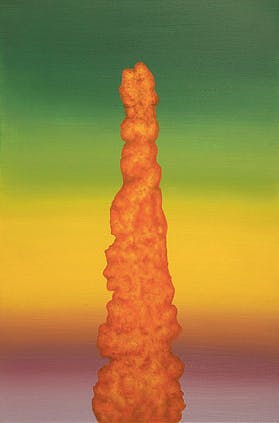 Ro2 Art is thrilled to present CHROMA-chameleon, a wonderfully colorful group show by UNT alumni Rachel Fischer, Betsey Gravatt, Adam Palmer, and Austin Sparks. Known for their bold use of color, these four artists analyze and respond to the world around them in various ways, drawing inspiration from everyday objects, racing thoughts, and childhood memories.

The show will run from April 21 through May 26, 2018. There will be an opening reception held Saturday, April 21, from 7-10PM at the Ro2 Art Downtown Pop-Up located at 1508 Commerce Street in Downtown Dallas.

Rachel Fischer is a multimedia artist currently working in Denton, Texas. She earned her MFA at the University of North Texas, and has been the recipient of numerous awards and grants, including the Dallas Museum of Art, Arche and Anne Giles Kimbrough Fund and the Nasher Artist Microgrant for her part in the art organization Brick Haus Collective. Her work has been published in New American Paintings and has been exhibited throughout the state and nationally. She has been an artist in residence at the Penland School of Crafts and The Vermont Studio Center.

Betsey Gravatt is an artist based in North Texas. She received her BFA in Studio Art, with a concentration in Drawing and Painting, from the University of North Texas. She is currently in her second year at Texas Woman’s University, undertaking an MFA in Painting, and a minor in Intermedia. Gravatt’s work has received several awards, including the Annual Voertman’s Award, The Cindi and Mike Holt Award, and the John Weinkein Distinction in the Visual Arts Award.

Adam Palmer was raised in Monahans Texas. He received his BFA in Printmaking from Angelo State University in 2004, and his MFA, also in Printmaking, from the University of North Texas in 2011. In addition to printmaking and screen printing, Palmer also explores other media such as drawing and sculpture. Palmer currently lives and teaches high school art in the Fort Worth area.

Austin Sparks is a Texas based artist currently residing in Denton, where he attends the University of North Texas for Drawing and Painting. Austin’s work has been included in several juried exhibitions around North Texas, including those at the Brickhaus Collective and 500X. He is the winner of the Jo Williams Best of Show Award for his acrylic painting ‘Living Room,’ as well as Voertman’s Prize. Austin is also a member of the Visual Arts Society of Texas.

Join us April 21st from 7-10 p.m. for the opening reception of CHROMA-chameleon!