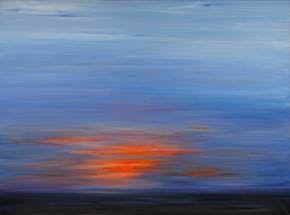 Octavia Gallery is thrilled to present Deep In The Heart by Gay Gaddis. The exhibition is the artist’s third solo show, following two successful shows in New York City. It runs from December 8, 2017 to January 31, 2018.

The paintings included in this exhibition feature stunning Texas Hill Country landscapes inspired by Gay Gaddis’ working Texas Longhorn ranch, The Double Heart, nestled in the grasslands and canyons between the towns of Marble Falls and Burnet.

The Double Heart is Gaddis’ home, pride and open-air studio. It serves as inspiration to capture the essence of the Texas countryside and the symbolism of the Double Heart brand—enduring passion, forging new trails, safe passage and journeys motivated by love. In Gaddis’ landscapes, these themes are captured as nature’s elements collide in bursts of color and layers of brush strokes to create the feeling of big and ever-changing skies.

Gaddis has a deeply rooted belief that nature informs our thinking and actions, so she takes her paint and canvas outside on the ranch to surround herself with the very nature her art embodies.

The artist works from the top of the canvas and paints down to the horizon to create landscapes that feel both rustic and refined. Her paintings make you feel her physical presence at The Double Heart through thousands of brush strokes that melt colors into each other.

Beyond being her inspiration and studio, The Double Heart is a working Texas Longhorn ranch and family retreat. Along with the Longhorn, the ranch is home to quarter horses, a herd of Boer goats, Border Collies and abundant wildlife–deer, turkey, wild hogs, coyotes, fox, ringtails, rattlesnakes and many more.

Gaddis’ art is a return to her truest creative roots. After earning a Bachelor of Fine Arts in Studio Art from the University of Texas in 1977 (she is now on the advisory council for the University of Texas Fine Arts College), her creative impulse took her into the world of advertising for almost 40 years (and counting). In that time, she founded T3, which is now the largest U.S. advertising agency owned by a woman. Her first book, Cowgirl Power, about blazing your own trail in business and life, will be published in January 2018 by Hachette.

Texas Monthly recently named Gay as a Top 10 Artist to collect now, and she has been featured in the acclaimed Page Magazine as one of the top 10 shows to see in NYC.

Octavia Art Gallery’s satellite location opened in Houston, Texas in 2014. The Houston location exhibits a curated selection of the gallery’s represented artists along with emerging and mid-career Texas based artists.