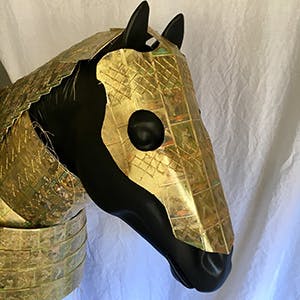 Ro2 Art is pleased to present ‘Pegasus Armor,’ a solo exhibition featuring new works by Fort Worth artist Joshua Goode. The show will run from November 4 through December 2, 2017. There will be an opening reception held Saturday, November 4, from 7-10 p.m. at Ro2 Art, located at 1501 S. Ervay Street in Dallas’ Cedars neighborhood.
As an artist, Joshua Goode fabricates convincing archaeological evidence to support the existence of the imaginary Aurora-Rhoman civilization, preserving his childhood memories in the guise of ancient artifacts. This personal mythology is bolstered by Goode’s staged archaeological digs, which allow the artist to adopt and distort both the historical and mythological aspects of various regions around the world. Inspired by amateur archaeologists such as Heinrich Schliemann who discovered Troy, and by past elaborate hoaxes like that of the Piltdown Man, Goode uses his “discoveries” to manipulate and verify his invented civilization.

In his upcoming exhibition, Goode documents one of the top three unexplained mysteries of North Texan history – the discovery of the Golden Pegasus Armor. Below is an account from The Aurora-Rhoman Institute of Archaeology and Cultural Relics, Goode’s made-up, archaeological research institute:

Of all the unexplained mysteries in North Texas there are three that clearly top the list—The Aurora Spaceman, the Ancient Stone Wall in Rockwall, and the most unbelievable, the Golden Pegasus Armor. Discovered in 1994 northwest of Fort Worth, a subterranean tomb containing prehistoric artifacts is discovered by four teenagers who stumbled upon it after following their dog down a narrow entrance into a cavern. The 15,000- to 17,000-year-old artifacts, consisting mostly of arms and armor, are among the finest examples of art from the Upper Auroralithic period, the highlight of which is the complete set of Golden Pegasus Horse and Rider Armor that was fitted for a child. This has led researchers to assume the tomb likely belonged to a child, and even more remarkable that much of the armor was made by the child. There is ongoing debate as to whether this was common armor fabricating practice or if this was a crude youthful attempt at replicating popular designs of the era.