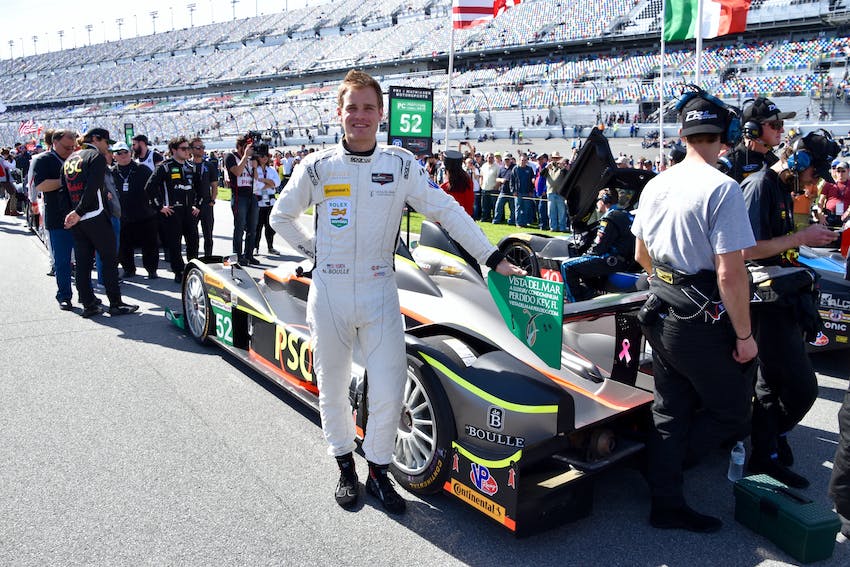 Dallas, TX — Nick Boulle has been confirmed to race in the IMSA WeatherTech SportsCar Championship season-opening Rolex 24 Hours of Daytona. Nick Boulle, the 27-year-old son of Denis and Karen Boulle — of de Boulle, an independent jewelry salon in Dallas and Houston — will appear in a strong driver lineup in what is the race’s 55th anniversary of the Rolex 24 at Daytona, North America’s premier sports car event.

Four young drivers are set to pilot the Oreca FLM09 in the Le Mans Prototype Challenge (PC) class. Boulle will drive alongside full season driver James French, Patricio O’Ward, and Kyle Masson. The car features an open-cockpit and technology such as a carbon fiber chassis, carbon brakes and sequential gearbox. Weighing in at 1990 pounds, the PC car reaches top speeds of around 190 mph with more than 450 horsepower.

“I am beyond excited to take part for the second time in the ROLEX 24 Hours of Daytona,” said Boulle. “I had success racing with Performance Tech Motorsports & James French in 2016 where we logged a podium finish in the Lone Star Le Mans race at Circuit of the Americas, so I think we can build on that success. Having so much support from Texas companies, not only de Boulle, but also Clover Partners, McFadden & Miller and Palmares Energy makes this race even more important to me. We have a great group attending so my hope is that all of the hard work we’ve put in to make this event possible and successful comes together for us this year!”

Winners’ of this historic 24-hour endurance race receive very special engraved stainless steel ROLEX Daytona watches. They are some of the most sought after timepieces in the world and these special trophies are coveted by racing drivers around the world. The de Boulle location in Dallas is proud to carry Rolex timepieces.