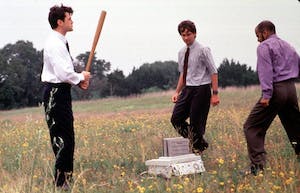 Get out your flair, crank up the Geto Boys, and destroy all printers. Cast members Ron Livingston (Peter), Gary Cole (Bill Lumbergh), and David Herman (Michael Bolton) will join director Mike Judge to celebrate OFFICE SPACE at 20. After a 35mm screening at the Paramount Theatre, the cast and crew join AFS to reminisce about the making of this Texas classic, the recipient of the 2019 Star of Texas Award of the Texas Film Hall of Fame. The film will be inducted the following night, March 7, at the 2019 Texas Film Awards.

OFFICE SPACE turned the travails of the modern office worker into one of the most ingenious and relatable workplace comedies of all time. Written and directed by Mike Judge (Beavis and Butt-Head, King of the Hill, HBO’s Silicon Valley), OFFICE SPACE was a groundbreaking satire of white-collar ennui, and it became one of the biggest cult hits of the late 1990s.

The film follows Peter (Ron Livingston) and his cubicle-dwelling friends Samir (Ajay Naidu) and the unfortunately named Michael Bolton (David Herman), software developers at a downsizing tech firm. The films iconic characters were built upon the archetypes of the modern office: a passive-aggressive and lazy boss, played by Gary Cole; Stephen Root as a disgruntled stapler-obsessed office outcast, and Jennifer Aniston as Joanna, the waitress at the nearby corporate chain restaurant. The film shot in and around Austin and used the city’s outskirts to depict “anywhere, USA,” with corporate office buildings, traffic jams, big box stores, and restaurants. While OFFICE SPACE flew under the radar during its initial theatrical release, it gained popularity on television and home video, becoming a cult hit. Produced by Twentieth Century Fox, the film remains one of the studio’s highest selling home video offerings to this day.