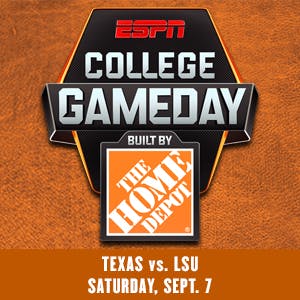 ESPN’s College GameDay broadcasts live from the LBJ Library lawn on Saturday, Sept. 7, ahead of Texas Football’s highly anticipated matchup against No. 6 LSU. The show airs on ESPN from 8-11 a.m. Central.

Admission to the College GameDay broadcast is free for all fans. The crowd pit opens at 5:30 a.m. Parking lots open at 5 a.m. Fans visiting for the broadcast are encouraged to park in the East Campus Garage at 1200 E. MLK Blvd.

Don’t have a ticket to the game? Join us for the the official Texas-LSU Watch Party at 6:30 p.m. located at Longhorn City Limits presented by ATX Web Designs (LBJ Lawn, northeast corner of DKR-Texas Memorial Stadium). The game will be shown on a giant screen on the LCL stage.

Stubb’s BBQ, the Deep Eddy Lounge, and additional beverage stations are open throughout the duration of the game. Alcoholic beverages are sold until the end of the third quarter.

Fans may bring folding chairs and blankets onto the lawn for the watch party. Tents, umbrellas, coolers, and ice chests are prohibited for this event.

YOUR TEXAS FOOTBALL GAMEDAY EXPERIENCE IS BACK AND BETTER THAN EVER!

Hailing from Dripping Springs, Midland has been shaking up the country music scene since their formation in 2013 and headlines LCL for the LSU game. Their 2017 debut album “On the Rocks” was declared “the year’s best country album” by the Washington Post. It earned numerous accolades for the band including New Vocal Group of the Year Award at the 2018 ACM Awards. Their latest single, “Mr. Lonely,” is the first single off their highly anticipated second album.

Supporting Midland is Americana artist and Austin-based singer-songwriter Rob Baird. Baird has been a constant touring force playing alongside acts such as Jason Isbell, Billy Joe Shaver, Don Williams and The Steeldrivers. “Fade Away,” “Dreams and Gasolines,” “More Than Willing,” and “Mississippi Moon” are among the fan favorites from his first three albums. Baird released his highly-anticipated fourth album, “After All,” in January 2019.