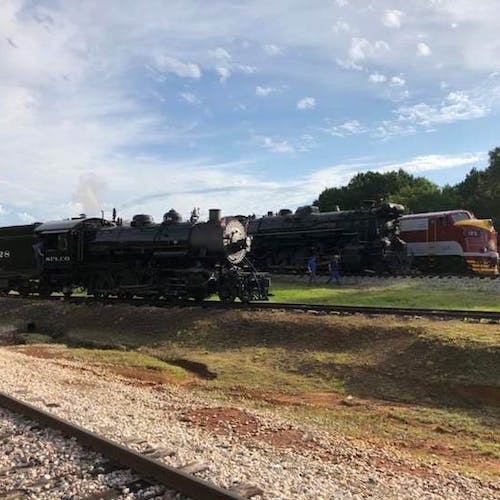 Time travel is a reality aboard Texas State Railroad. Vintage steam and diesel locomotives are the time machines that take you through the celebrated Piney Woods, transitioning you to a period when steam was king and diesel power was in its infancy.
The big boys of steam will come out to play throughout the year of 2019. Check the booking calendar to schedule a ride behind one of these rare steam locomotives of the historic Golden Age.

The Celebration of Steam at the Official Railroad of Texas, with a display of TSRR’s notable steam and diesel engines, will be at the Palestine depot. The property will open to guests at 8:00 a.m. and the train will depart the Palestine depot at 11:00 a.m. The static locomotives will be lined up on the wye, offering photo opportunities to capture and epitomize the summer opener. Guests who hold a train ticket will have better access to view these classic locomotives. For those without a ticket to ride, there will be a nominal fee to enter the property for this event. Our cafe and gift shop will be open for food, beverage and memorabilia purchases.

In addition to the vintage steam engines that power many of the present-day excursion trains, Texas State Railroad is home to extremely rare Texas & Pacific steam engine #610. Many would consider this massive locomotive a dinosaur, but Texas State Railroad has preserved it as an endangered species to be coddled and protected. The sole survivor of the T&P’s fleet of 70 engines with the 2-10-4 (Texas) wheel arrangement, #610 dignified the rails during the golden age of steam. Its design combined a high-capacity boiler with a modern valve gear and a four-wheeled trailing truck which became the prototype for American steam locomotives and a tribute to American engineering genius.

On Sunday May 26, passengers aboard Texas State Railroad will savor the flavor, and the sights, of East Texas. Expand all of your senses with a scrumptious 3-course meal aboard the season’s Memorial Day Brunch Train. 1:00 p.m. – 3:30 p.m.