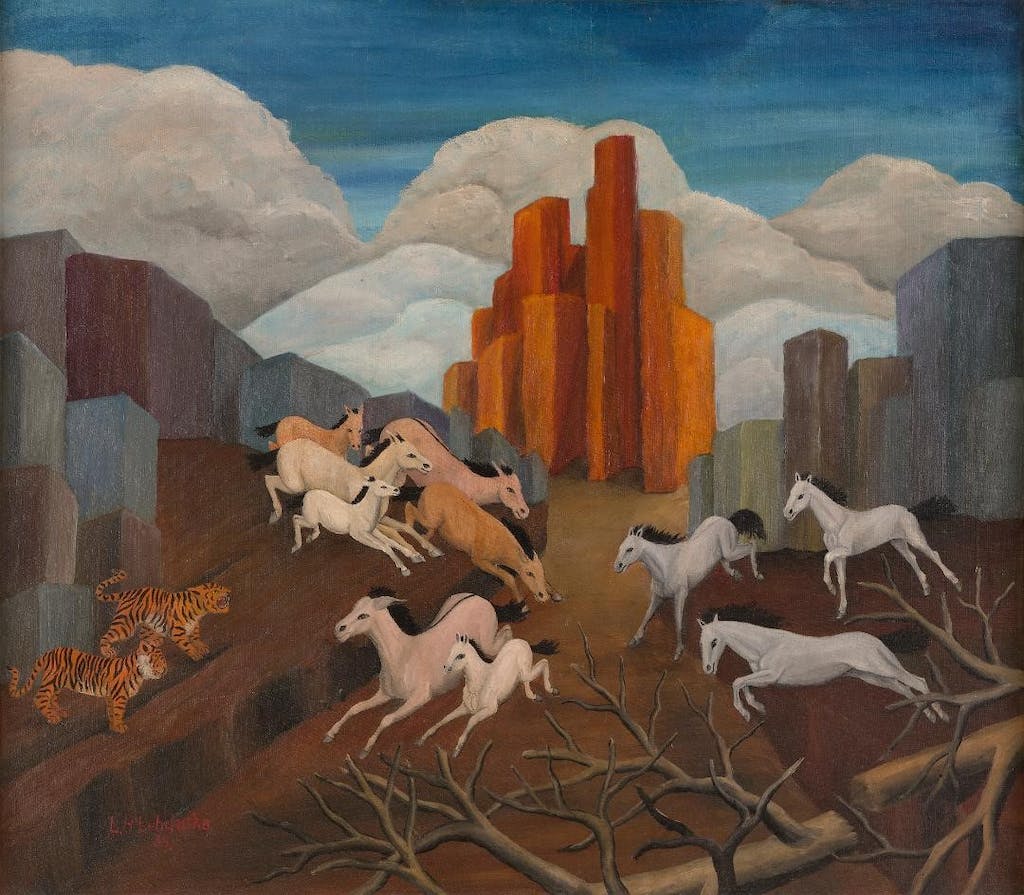 The Michelson Museum of Art is pleased to announce that The Unbridled Paintings of Lawrence Lebduska will be on view from September 3 through November 9, 2019. This exhibition presents the rare opportunity to experience the notable paintings of Lawrence Lebduska, one of the most popular modern folk-art painters of 1930’s America. Lebduska’s dreamlands and invented gardens teem extraordinarily with life and optimism in a nostalgic, uncorrupted style that captured the admiration of the American public. These intrinsically painted Edens propelled the artist and his work to celebrity among galleries, collectors, and museums during the rise of the avant-garde movement taking hold of the art world in New York and abroad.

Lebduska earned his first solo show in 1936 at the Contemporary Gallery in New York City nearly selling out his works. This show is thought to have ignited Abby Aldrich Rockefeller’s passion for collecting folk art. Lebduska’s painting. Boheiman Kitchen (1938 oil on canvas. Collection of Carl and Marian Mullis) was also included in the famed 1938 exhibition Master of Popular Painting shown at the Museum of Modern Art.

Lebduska was an outsider artist who navigated the intensifying New York art scene without the academic training and institutional tenure of his contemporaries. Born in Baltimore in 1894, Lebduska was raised in East Germany and trained as a stained-glass artist in Bohemia. He harnessed his skills as an artisan, translating these methods of formal expression through lively color fields to create the characteristic scenes and figures of his paintings. Lebduska’s creations reveal a smart and personal reaction to the art world during the
1930’s – 1960’s, exploring themes of life as an artist, art movements, and the allure exotic animals.

Lebduska’s dreamscapes favor peaceful visions of a world abundant with flowers and a menagerie of exotic animals, though some allude to lower points of the World Wars and the Great Depression. He is most often compared to the “wild beast”, French Fauve, Henri Rousseau. Like Rousseau, Lebduska did not confine his work and depictions to places he had ventured. Rather, he pulled inspiration from the mysterious lands shown in the magazine of his patrons, the veracity of foreign animals of the zoo, and the ideal spaces where he wished to spend his life.

Two of Lebduska’s paintings are included in the permanent collection of the Michelson Museum.

The Michelson has no entry fee and all events are free of charge.
The Museum is wheelchair accessible.