It can be difficult to see beyond the attention given to El Paso’s most significant contribution to tacos—Chico’s Tacos. It’s recognized by the Texas House of Representatives. It’s on TV. It’s available for mail order. Look a little harder, even along Alameda Avenue, home to the original Chico’s Tacos, and you’ll find a dynamic taco landscape populated by kiosks, food trucks, mom-and-pop taquerias, flashy joints and other longstanding institutions doing everything from slinging specialty fare to unabashedly finishing signature dishes with lettuce, tomato and Muenster cheese—a typical El Paso substitute for Tex-Mex’s classic orange cheese. As part of the run up to Texas Monthly’s 2015 taco issue, the magazine’s editors have scattered a team of discerning taco aficionados across the state do to the demanding work of eating and evaluating as many tacos as they can stomach. We’ve featured notable tacos in Austin, Dallas-Fort Worth, San Antonio, and in the Rio Grande Valley. Now it’s El Paso’s turn. The 13 tacos listed herein offer a sweeping look at what that border city has to offer. 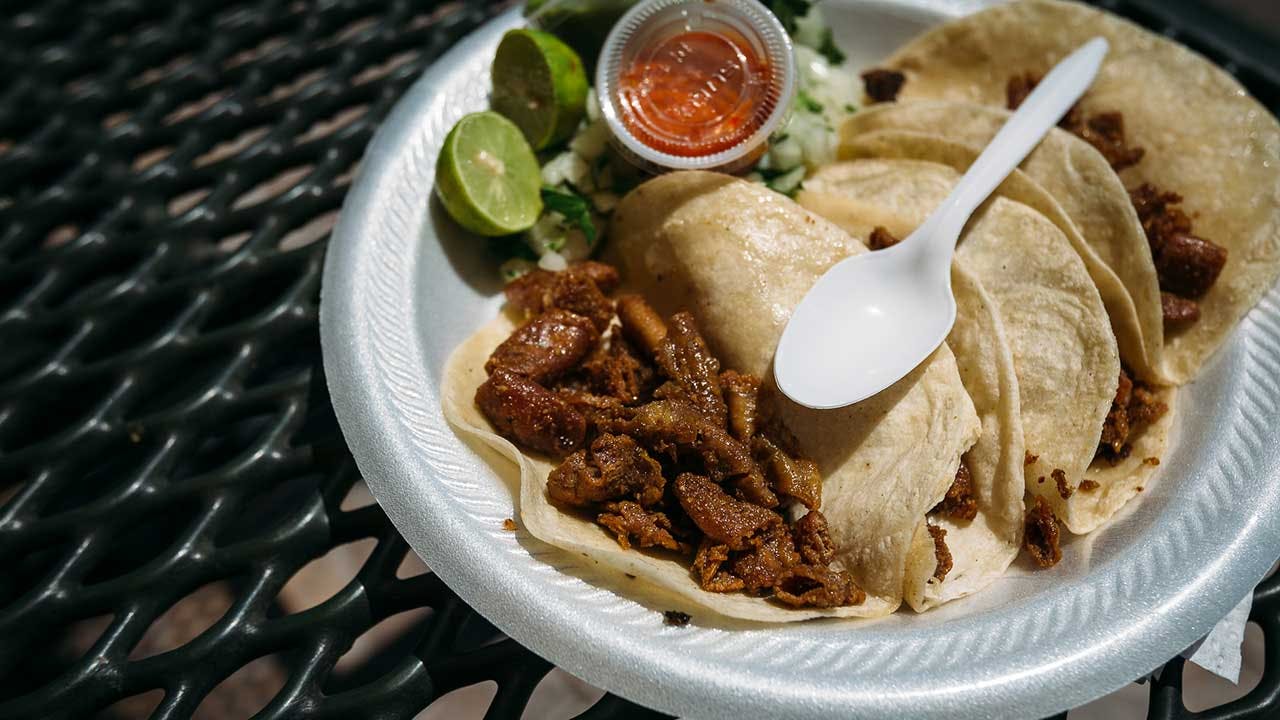 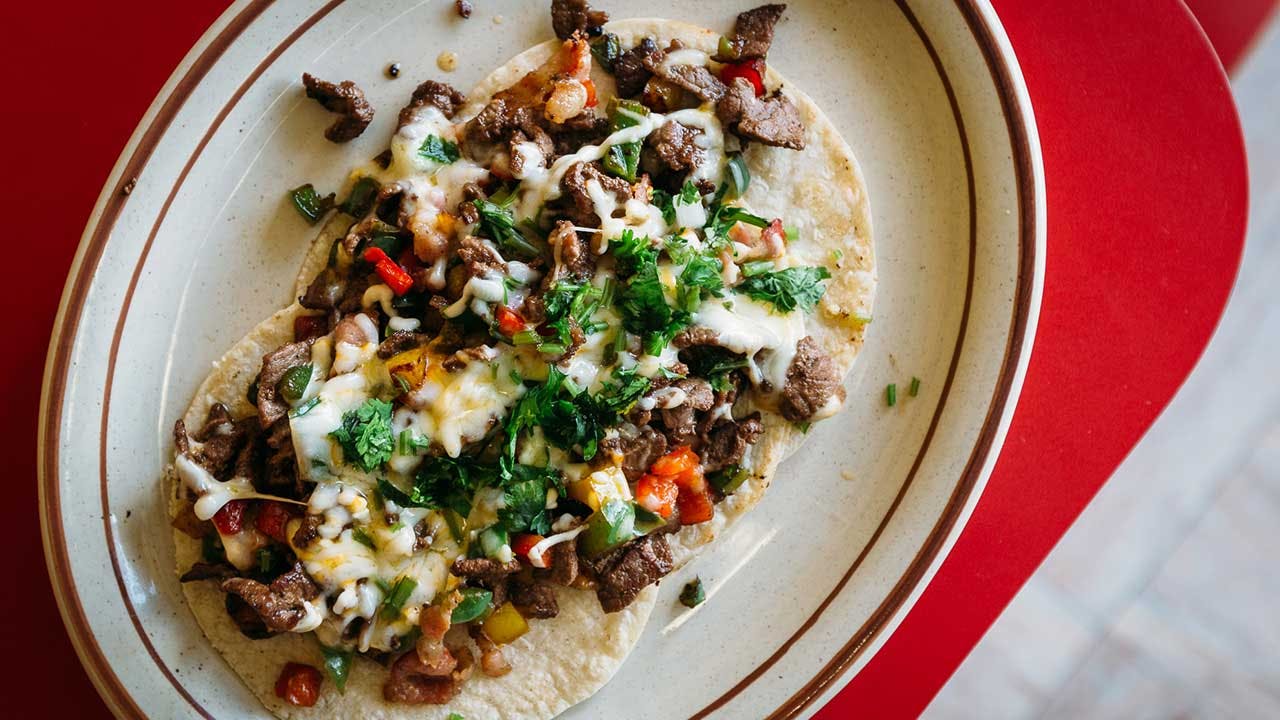 This strip-mall eatery you can buy the art right off the walls, but not before biting into the masterpiece that is a taco de alambre. Sofi’s version of the mixed-meat taco combines grilled beef, soft bacon and sweet green, red and yellow bell peppers in a melted Muenster cheese lace on tortillas made nearby. An order comes with three tacos and a serving of rice and beans. But if you’re going all in for a taco bonanza, the kitchen will hold the sides.
4709 Crossroads Dr, 915-219-7706. Open Mon–Sat 7 a.m.–7 pm., Sun 7 a.m.–3 p.m. www.sofiscomidamexicana.com 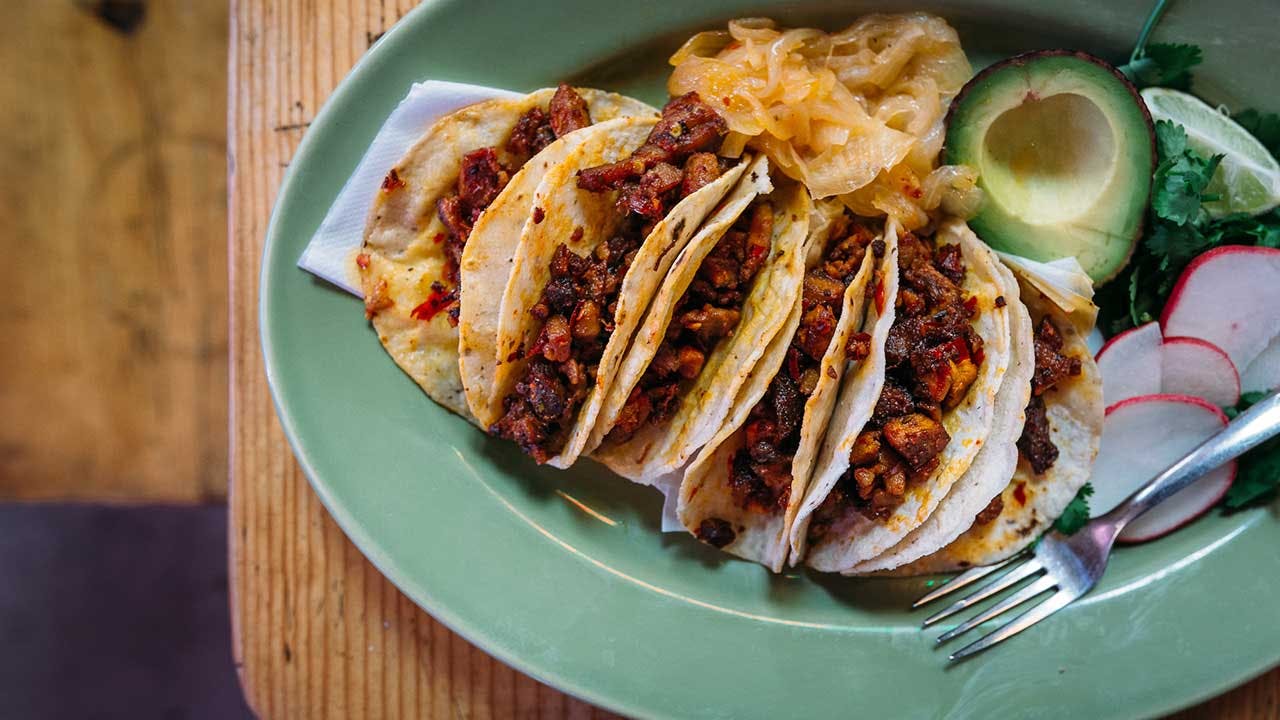 The protein component in the iconic taco al pastor, the seasoned pork cooked on the vertical rotisserie called a trompo, is marinated in a chile and spices mixture that imbues the meat with shades varying from brown to scarlet and—depending on the taqueria—varies in flavor subtly. But it’s never overpowering. Except in El Paso, where the tacos al pastor are dressed in seasoning as imposing as the Franklin Mountains. Trompos in El Paso wear chile-seed freckles as they slowly twirl in view of customers, as they do at Tacos Chinampa. Orders of six are served with half an avocado, cilantro, radishes, grilled onions, and limes. The whole lot would make for excellent late-night munching, when tacos al pastor are best. Unfortunately, Chinampa, like most of El Paso, shuts down before midnight, and the trompo is dismantled an hour before closing. Get there early.
7500 N Mesa St #302 (multiple locations), 915-581-6157. Open Sun–Thur 7 a.m.–10 p.m., Fri & Sat 7 a.m.–11 p.m. www.chinamparestaurant.com 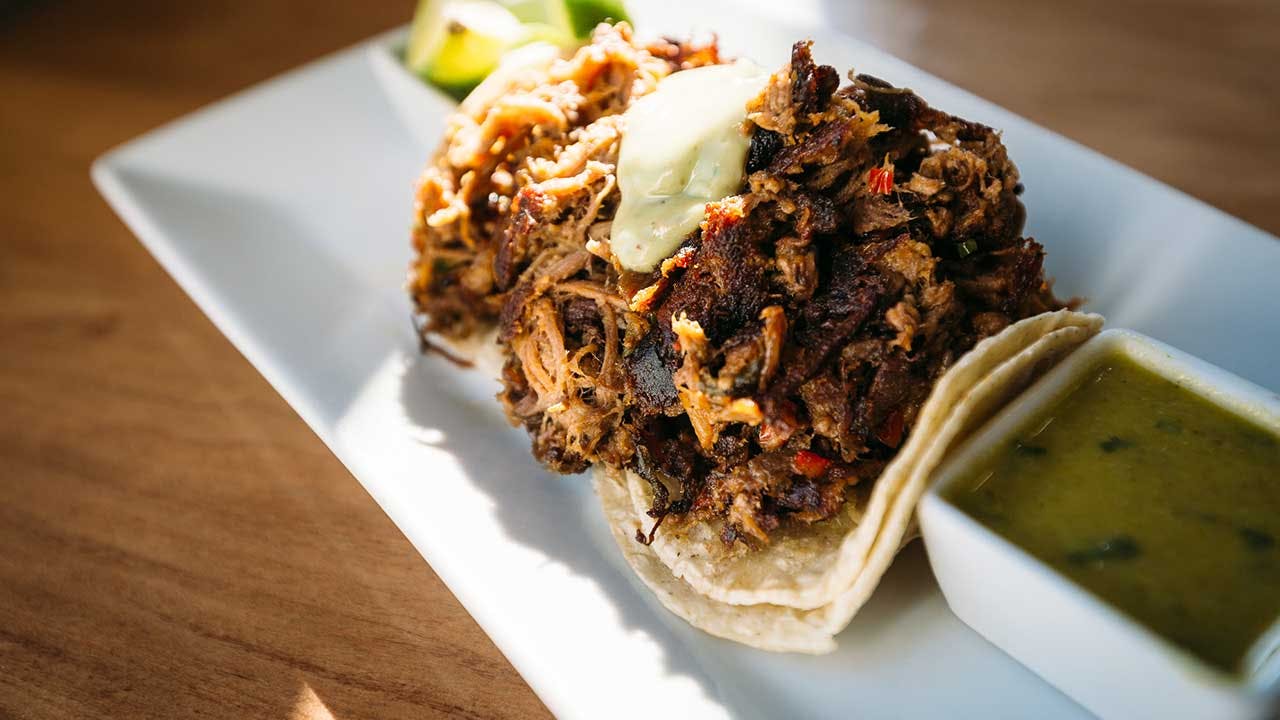 Not content with serving only pan dulces and burritos, this industrial-chic Mexican bakery serves fantastic tacos piled with fillings beyond the commonplace tripe and al pastor. You can go gourmand with bone marrow and pork belly, for example, or go tried-and-true Texan with the seven-hour brisket marinated in chiles and tomatoes topped with guacamole and bookended by ramekins of lime wedges and prickly jalapeño salsa. But we warned: the tortillas, at approximately two-inches wide, can’t contain the crust-speckled brisket rising steeply from its corn base. You’re going to need a fork. And maybe a knife.
6415 N. Mesa St, 915-585-8720. Open Mon-Thur 6:30 a.m.–2 p.m. and 5 p.m.–9 p.m., Fri 6:30 a.m.–2 p.m. and 5 p.m.–10 p.m., Sat 6:30 a.m.–10 p.m., Sun 6:30 a.m.–4 p.m. www.facebook.com/ValentinesKitchenTX 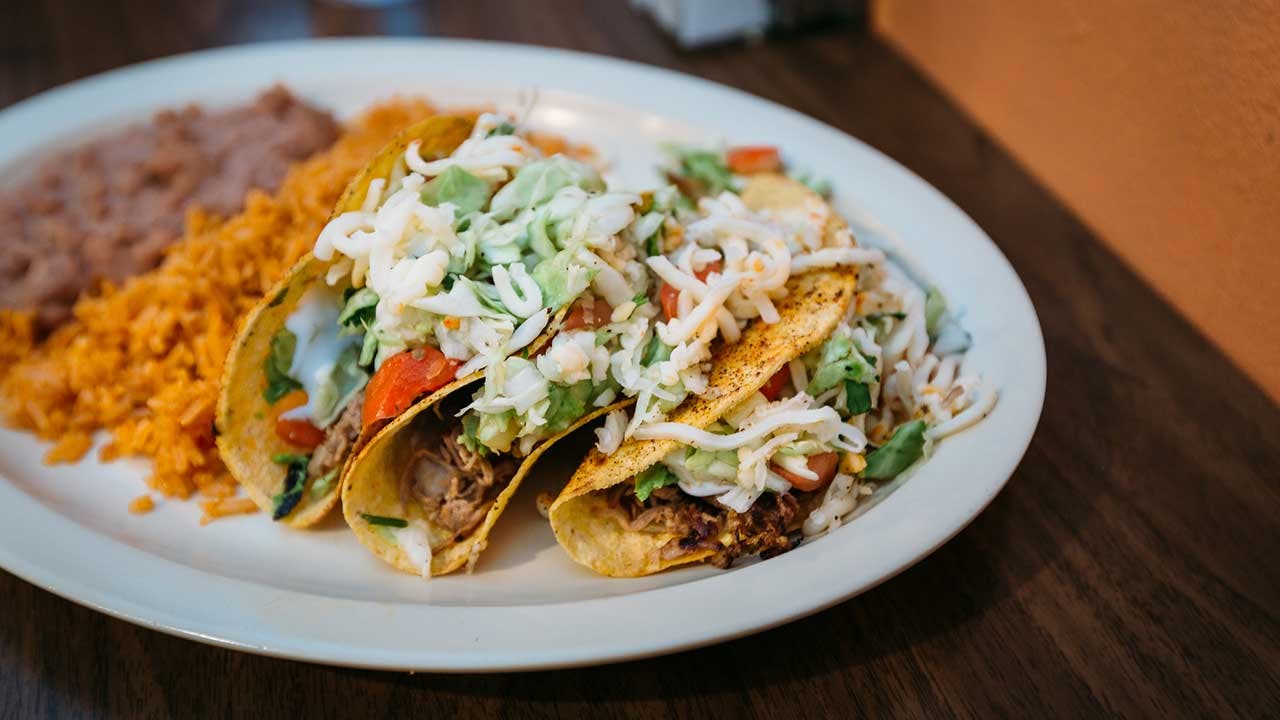 In the land of carnitas, tacos al pastor and rolled tacos, one-of-a-kind tacos, like the Tacos Antonio platter, are scarce. Shredded, pot roast-like brisket is cradled in freshly fried tortillas coated with rust-hued seasoned salt. Shots of cabbage and avocado wedges fill in the role of garnishes, while grated Muenster anchors the Tacos Antonia to the borderland region. No matter the time of day, the platter, named after founder Lucy Lepe’s sister, is always available, and the closest you’re likely to get to breakfast tacos in burrito country. They’ll also do wonders for your karaoke game at the adjoining King’s X Bar, accessible through the back of the restaurant.
4119 N. Mesa Dr, 915-544-3922. Open 7 days 7 a.m.–11 p.m. www.lucysrestaurants.com 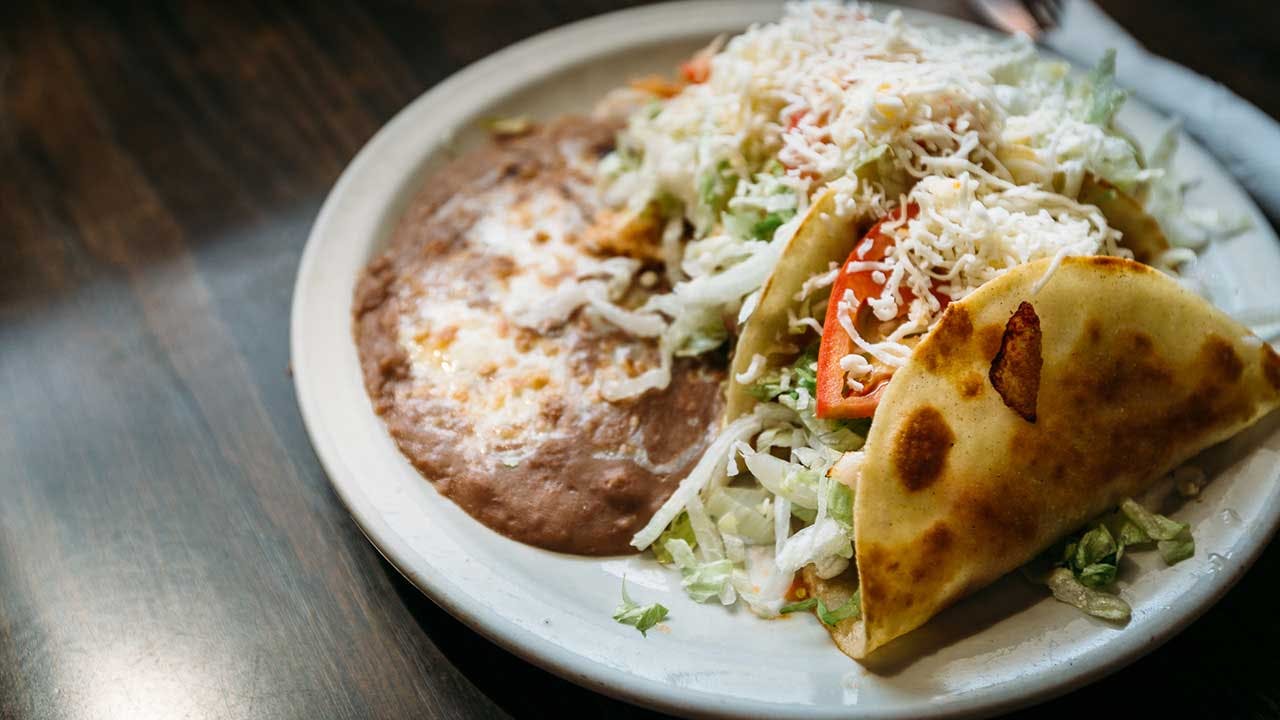 Of course the El Paso version of a California roll is a taco. And the only place to get this unique item is at Kiki’s. Housed in a building more than a century old, the structure has hosted grocers, barbershops, a music store, a pharmacy, and several bars, at least, before becoming a dark, wood-paneled eatery where the staff behind the bar is as likely to breakout into a sing-along of Kenny Rogers’ “The Gambler” on the jukebox as it is to testify about the singularity that is the crab taco. The plate of three crispy tacos is filled with imitation crab, a generous serving of crisp lettuce, heavy-handed helpings of yellow and white cheeses and tomato wedges. The fiery red salsa served on the side balances the shellfish’s sweetness.
2719 N. Piedras St., 915-565-6713. Sun–Thur 10:30 a.m.–9 p.m., Fri 10:30 a.m.–10 p.m., Sat 10:30 a.m.–9 p.m. www.kikisrestaurant.com 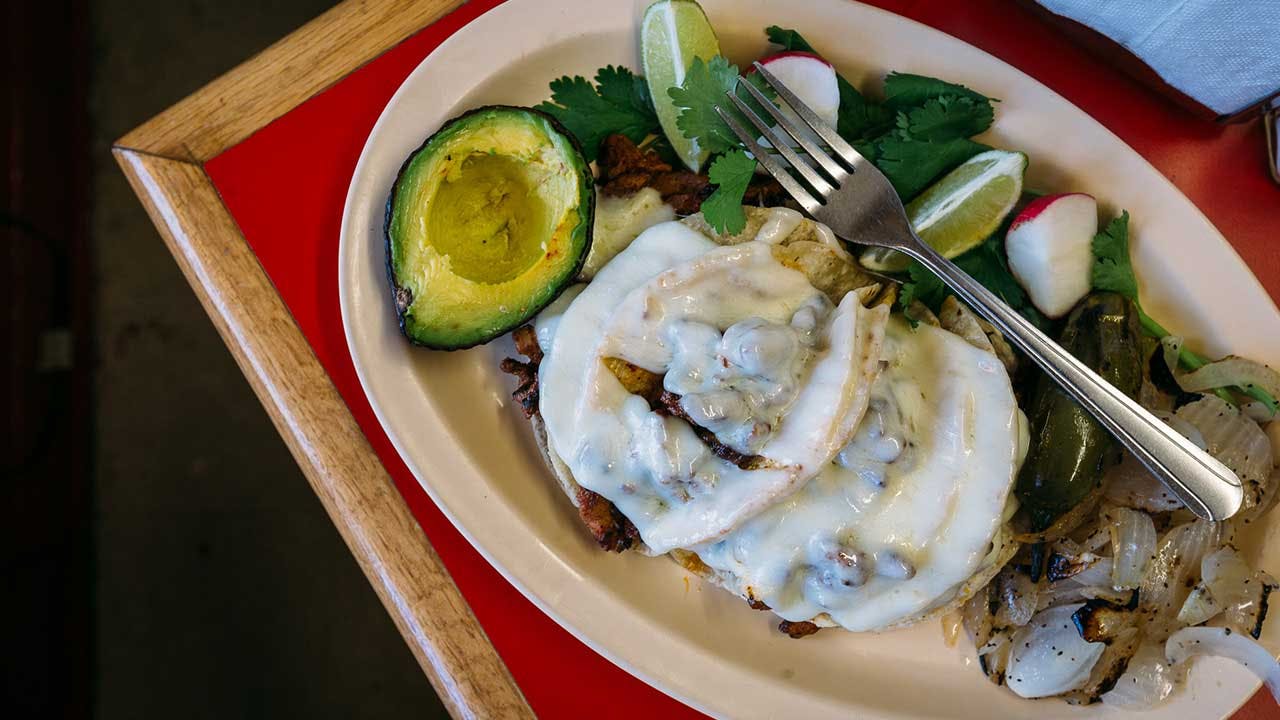 The interior of this neighborhood taqueria is festooned in kitschy folklorico. Near the front door is a statue of a sow nursing piglets. Farther inside another statue—this one of a jolly, mustached sombrero-wearing gentleman—stands sentinel before another room. Miniature sombreros dangle from the ceiling. Serapes are draped here and there. The mounted goat head and pastoral paintings are hard to miss. And on your plate is an order of four jaralillos de res, one of the house specialties. The tacos of grilled steak are covered in a sturdy blanket of queso fundido, making for gooey treats for which you’ll need extra napkins.
3825 N. Piedras St., 915-566-4420. Open Tues–Sun 10 a.m.–9 p.m. 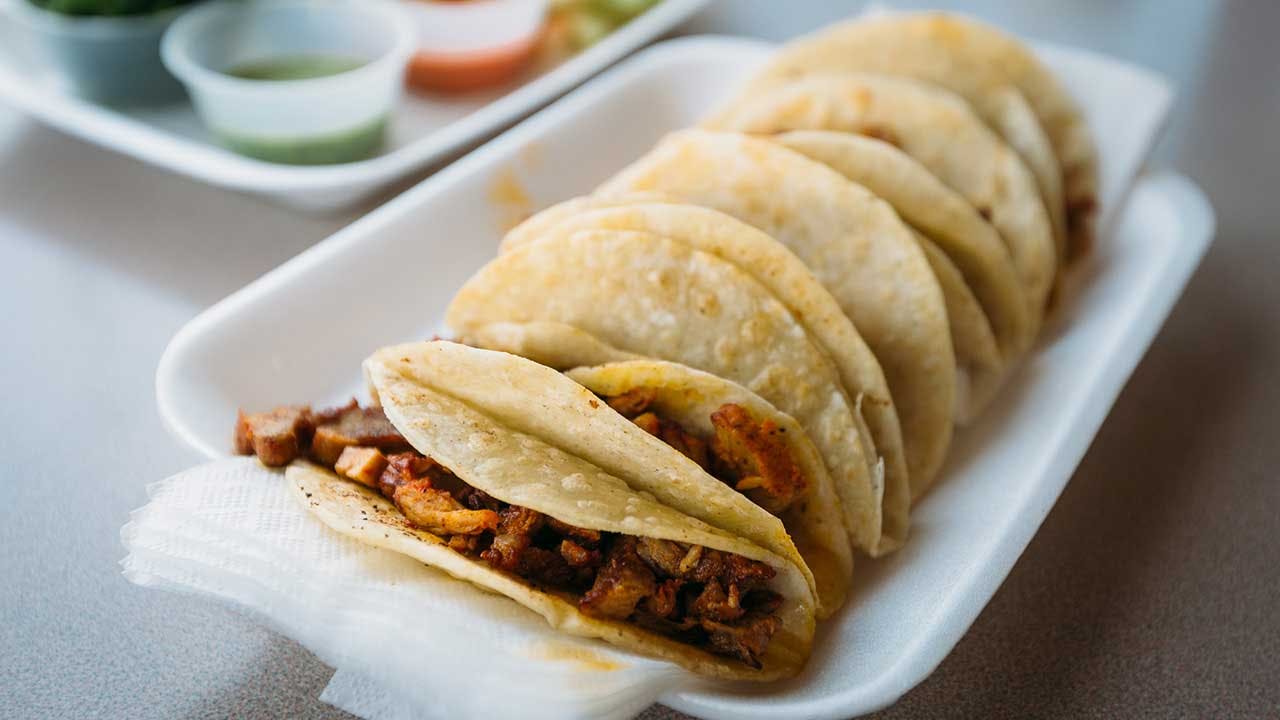 Across the street from Tacos Toro Bronco with a view of Franklin Mountains State Park, the small cash-only Los Tragones specializes in El Paso’s aggressively seasoned tacos al pastor. Sliced off the trompo to order and served on Styrofoam trays, the tacos can be customized with more than standard cilantro and onions. Try the peppy strands of chile-dusted onions. For extra punch double up on the salsas, an orange habanero and jalapeño salsas, and then off for a ride on the Wyler Aerial Tramway you go. It’s just up the road.
3830 N. Piedras St, 915-566-0280. Open daily 11:30 a.m.–10 p.m. 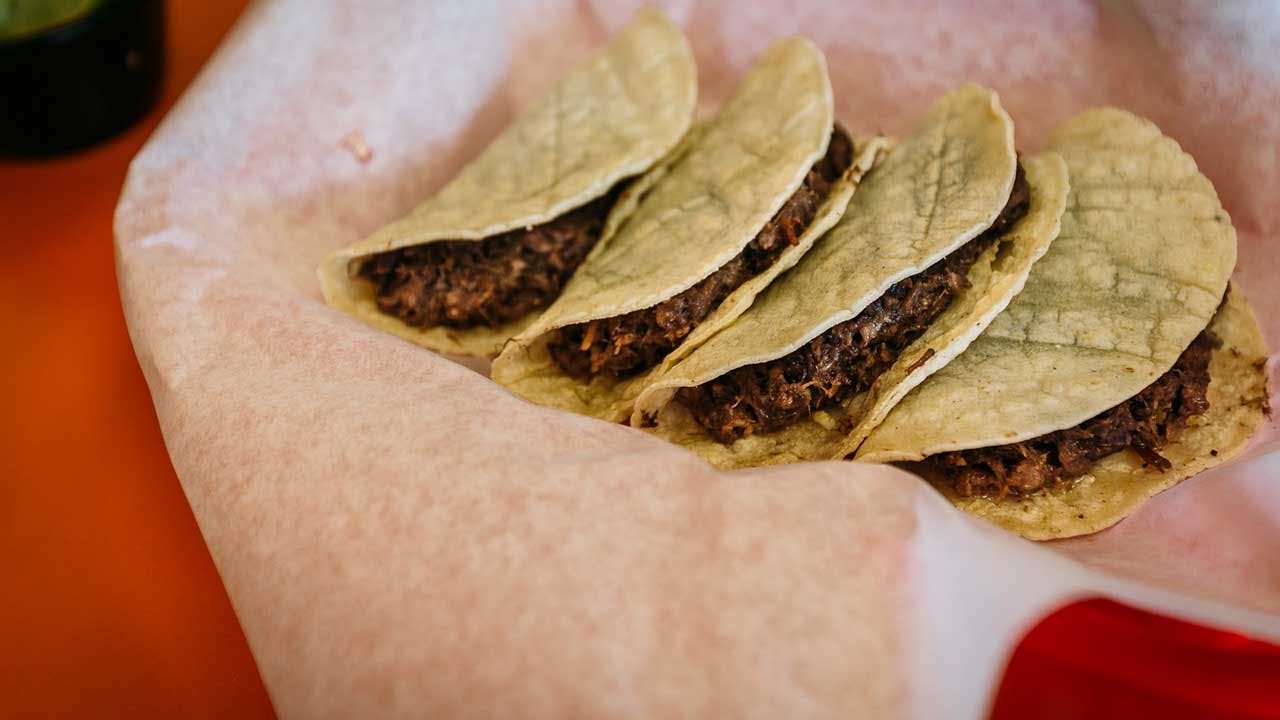 Silky beef barbacoa with a peck of gaminess sets Tony’s apart from the mob of bakeries, mini-marts, tortillerias, and drive-thrus doling out innumerable pounds of the meat. At $6.99 for a plate of four tacos, it’s a bargain too. A plate of barbacoa tacos is also a superlative last meal for those embarking on a long drive to anywhere remotely resembling an urban setting east of El Paso. Take advantage of the free Wi-Fi when you Instagram your taco and its accompaniments: mixed onion and cilantro and salsa served right—in bowls, not squeeze bottles. Finish the taco with the cooling, creaming salsa verde and bid adios to the Paso del Norte region.
12370 Edgemere Blvd, 915-307-4137. Open 7 days 7 a.m.–4 p.m. 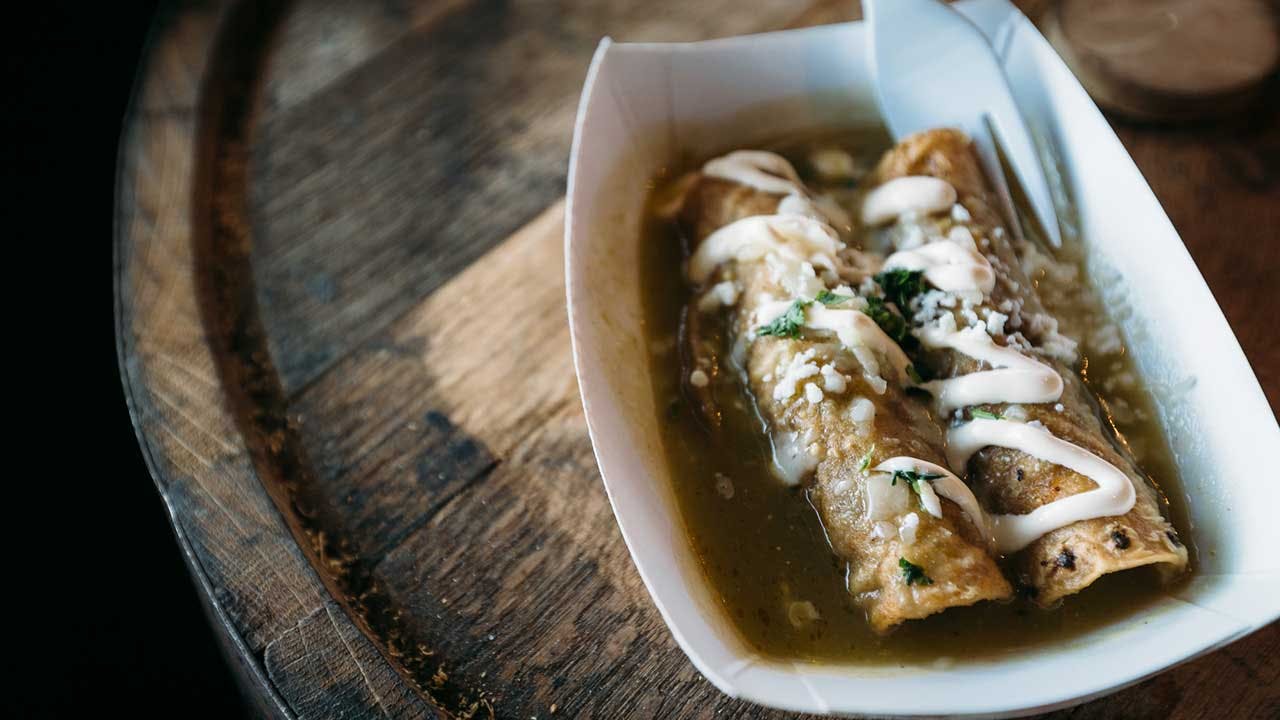 Flautas in a taco story? Absolutely. In Mexico, tacos come rolled as well as folded. And El Paso’s famed rolled tacos—you know the ones!—get justice at this gourmet food truck gone brick-and-mortar inside Funkmeyers Rec Room, an eighties- and nineties-themed “barcade” for nostalgic Gen Xers. (There’s pinball!) The tortillas for the flautas are made from a 50/50 mix of corn masa and white wheat flour, filled with ground beef, formed into flautas, and then fried before being dunked in a tart tomatillo-based salsa verde bath. (Ahogada is Spanish for “drowned.”) Mexican crema amplifies the dish’s sharpness, while queso fresco kicks in with the salt. Also worth consideration is owner Jesse Peña’s interpretation of a Rio Grande Valley taco, shot with queso fresco and a tangle of grilled onions—for those pining for a taste of Brownsville, more than 800 miles away.
1506 N. Lee Trevino Dr, 915-203-4163. Open 7 days 11–10. www.tacoholics.com 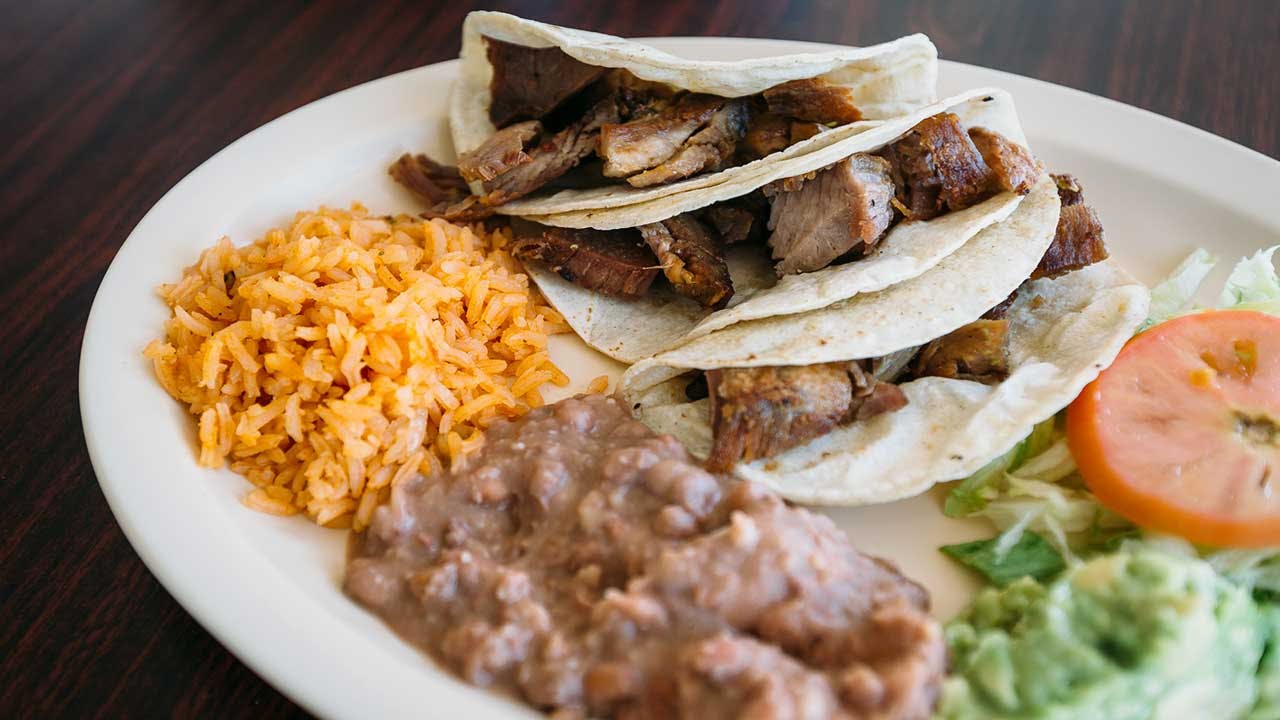 As a general rule, Mexican meat markets, or carnicerias, are ideal spots for happy taco hunting. In that regard, Flores Meat Market, a restaurant/butcher/supermarket/tortilla multiplex, does not disappoint. Here, the taco options are many and include a discada of chile-soaked chicken, ham and pork, a tripitas as well as a carnitas—all typical of the city’s taco scene. Skip those. Instead, put in an order for a platter of copper-colored taco de colitas de pavo (fried turkey tails), a rarity in the Lone Star State. Crunchy but not zapped of moisture and brightened by the workhorse trinity of lime, cilantro, and onion, a plate of colitis de pavo makes an ideal choice for those looking to stretch their taco wings.
1781 Zaragoza, 915-857-6666. Open 7 days 6 a.m.–9 p.m. 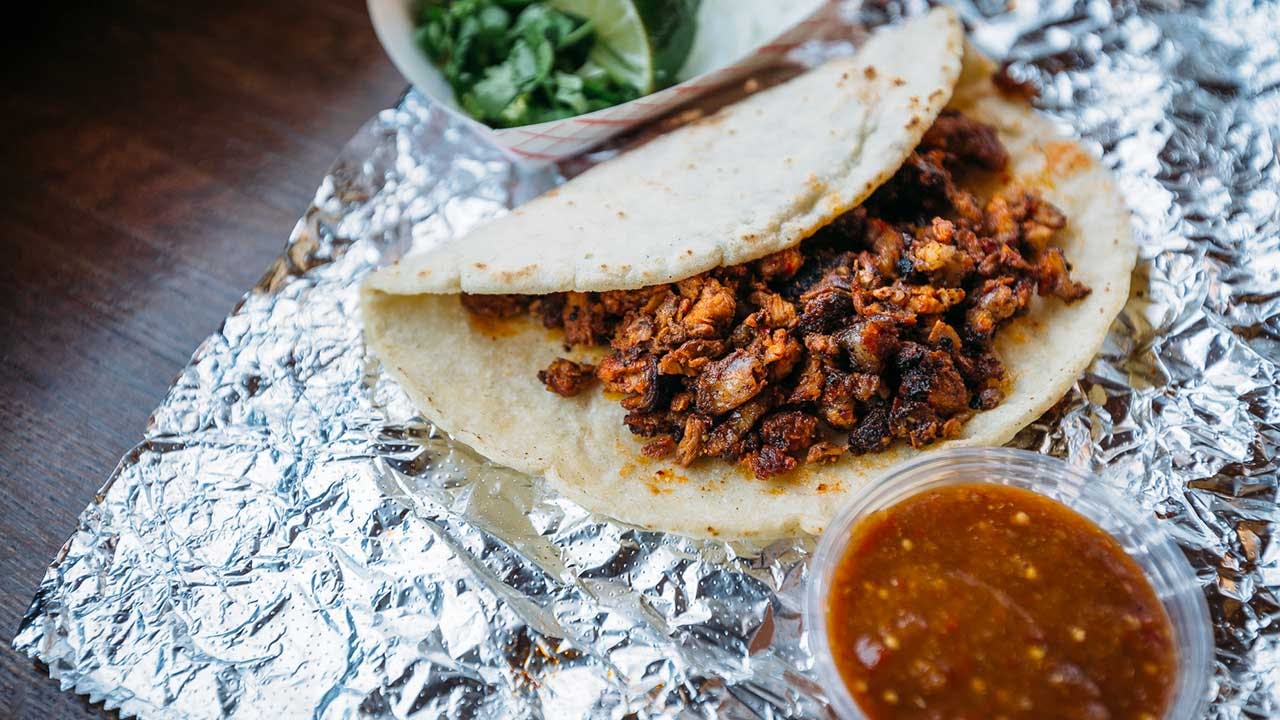 Originally established in Juárez, Mexico, in 1988 but now headquartered across the river in El Paso, Taco Tote is Chico’s Tacos only notable competitor—if there is one—for local affection. And if popular opinion and butts in booths are reliable barometers, Taco Tote is doing a bang-up job. “Taco Tote serves real Mexican food,” is a common pronouncement. Locations are jammed with lines at the cash register and packed seating. Everyone is clamoring for the adobado pork taco, the name for the non-trompo-cooked taco al pastor, in a house-made tortilla that’s closer in texture to a flapjack than thin hand-pressed corn disc. Its heft is needed, more so for the half dozen salsas available. The salsa tatemada (charred salsa) adds depth to the earthy pork, while the chambray, a chunky mix of green onions and jalapeños, sets the tongue ablaze.
2921 N. Mesa Dr, 915-532-6212 (multiple locations). Open Sun–Thurs 10 a.m.–10 p.m., Fri–Sat 10 a.m. –11 p.m. www.tacotote.com