As the taco trend marches north—beyond our own state’s borders—it’s good to remind ourselves where the roots of this culinary delight are sunk the deepest. That would be Mexico, of course, and within our borders, the Rio Grande Valley. Tacos are as entrenched in Valley culture as muffulettas are in New Orleans or cheesesteaks in Philly. Long before $5 avant garde tacos became the vogue in places like Austin and Oak Cliff in Dallas, modestly priced tacos were a cornerstone of this region’s cuisine. In our continued quest to find the greatest tacos Texas has to offer (no small feat, we know), we’ve turned our attention southward. So why all this taco tasting madness? Not that there really needs to be a reason to want to eat all the tacos, but Texas Monthly is beginning its research on finding the best tacos across the state, a list we’ll publish at the end of the year. Our quest to unearth the top contenders already took us on a taco tour of Austin, where we scouted out more than 100 tacos at taquerias, food trucks, highfalutin joints—well, basically any place were tortillas are slung and filled—and settled on 16 great options from the capital city. We then explored the vast expanse that is DFW. Now we’ve canvassed the RGV. This list is far from comprehensive, and as we continue our mission to find the best fillings stuffed in a folded tortilla, we ask that you share your recommendations (like we could stop you). We promise to get to them. In the meantime, here are some regional favorites. 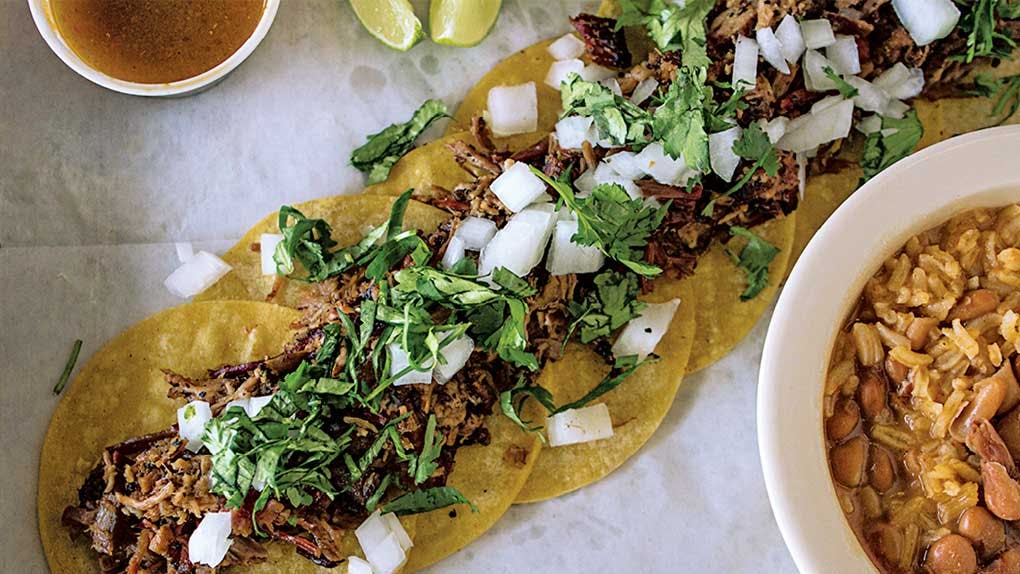 Two of South Texas’s reigning cuisines are Mexican fare and barbecue. Ace’s saw the potential for a fantastic flavor combination (akin to peanut butter and jelly or chicken and waffles), and married these two food groups. When we’re in a ravenous, kitchen-sink mood we order the Super Taco stuffed with smoked brisket, sausage, rice, and beans. But usually we keep things simple, which is why we keep going back for their barbecue taquitos: six mini taqueria-style corn tortillas topped with either moist chopped brisket or pulled pork. A sprinkle of onion and cilantro and a dab of Ace’s spicy barbecue sauce, with a hint of cayenne, adds a little punch. 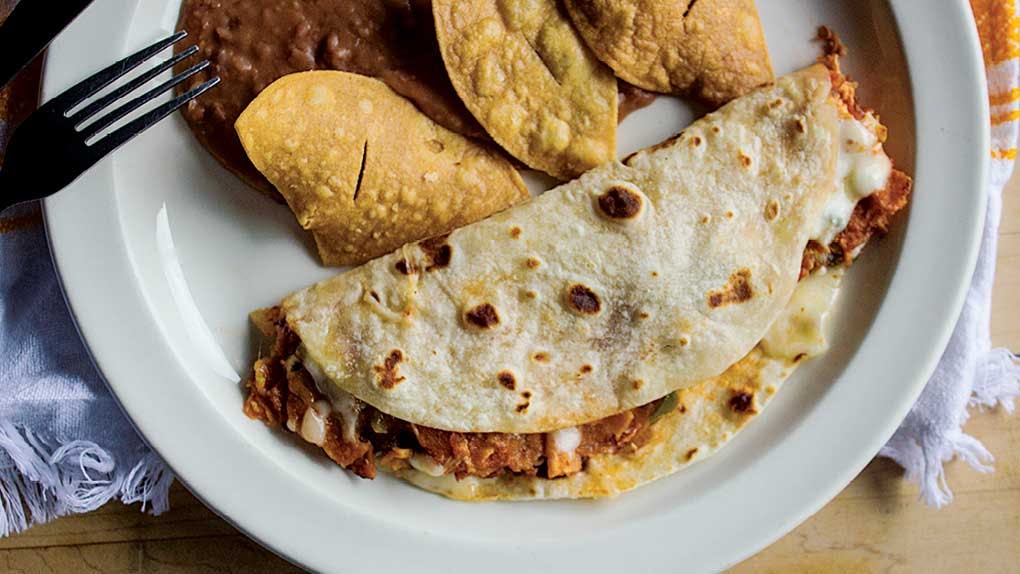 The Rio Grande Valley offers quite a cross section of society, a fact evident around lunchtime Anita’s, where farmers, oilfield workers, and students crowd the North Edinburg neighborhood cafe. The place is decked out with all manner of cute chicken-themed knickknacks, making you feel like you are a guest in somebody’s grandmother’s house. And, in fact, somebody’s grandmother was making fresh tortillas while we were there. Although Anita’s is known for its tender fajitas,  we’re fond of the chilaquile tacos, slow-roasted chicken (of course) nestled among spicy red salsa, white cheese, and crunchy tortilla chip strips. 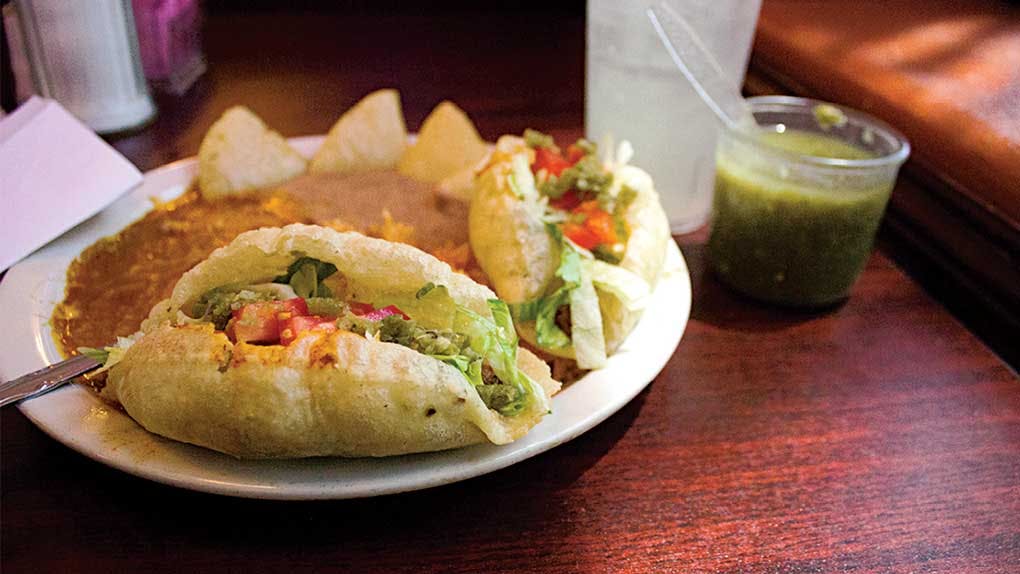 A visit to Caro’s, located well beyond the Valley’s major cities, is more than a taco road trip. It is a culinary quest. You don’t come here for the old-school filling of seasoned ground beef, lettuce, and chunks of ripe tomato. You come for the distinctive puffy taco shells that hold the filling. (For the uninitiated, these shells are made by deep frying raw corn tortillas until they inflate with steam like little balloons, a wondrous thing to behold. Only a few places in Texas, primarily in San Antonio, still go to the trouble of making them.) Biting into one will make you think of Pop Rocks, an experience that has kept Caro’s on the map since 1937. 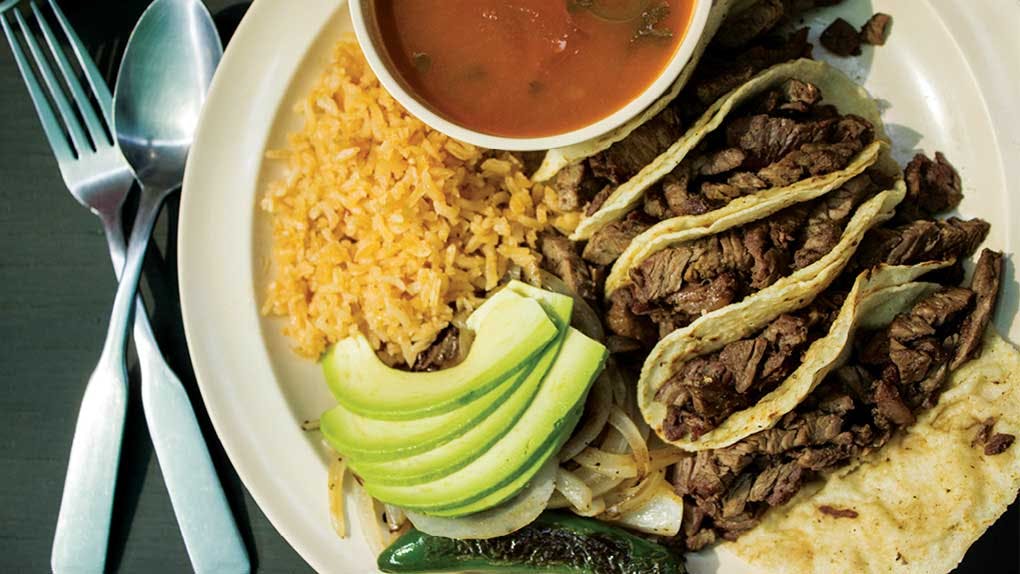 Part ice cream shop, part food truck, and part taqueria, La Pasada appears to enjoy having multiple personalities. They make their own tortillas here and also do a fine job with fillings of sausage and mollejas (veal sweetbreads). That said, our favorite La Pasada’s taco is beef fajitas. While we typically do not make a fuss over rice and beans, we have been known to mix their perfectly fluffy (not greasy) rice with zesty charro beans and add a spoonful of fresh pico from the salsa bar. 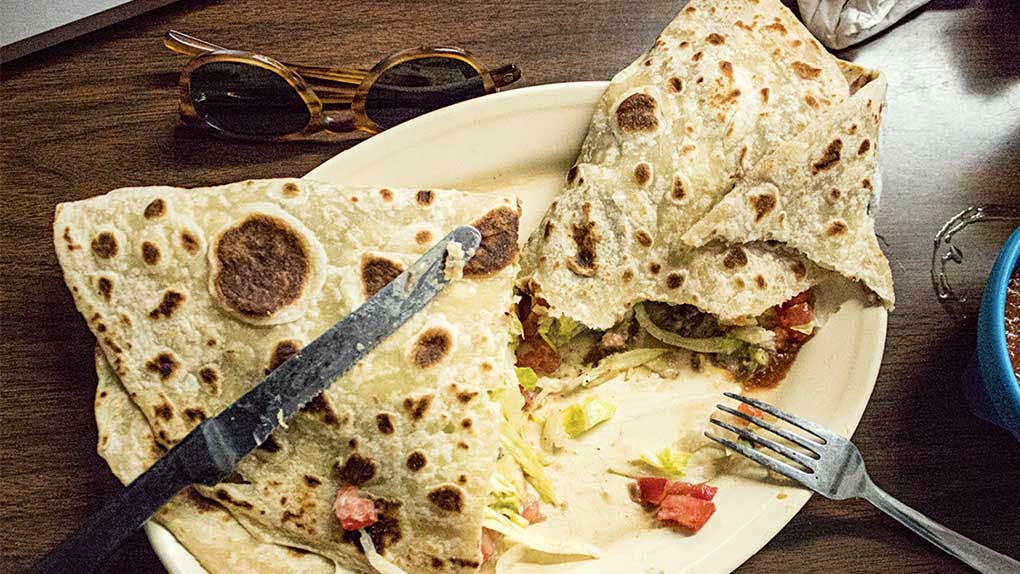 While waiting for our table at this crazy-popular taco joint, we chatted with a vacationing family, a group of sunburned fishermen, and partied-out table of Canadian nurses who considered mayonnaise an appropriate taco condiment. Although the proud owner of Manuel’s shook his head in dismay, he did reassure them that his tacos will cure all ills caused by overindulgence the night before. We peeked in the kitchen and saw a lady rolling out flour tortillas the size of pizzas. They were destined for the famous Con Todo (with everything) taco. (Seriously, the size boggles the mind, as this YouTube clip proves.) We like ours stuffed with beef fajita meat, beans, cheese, lettuce, and tomato, and with so much of it, the combination assured we didn’t leave Manuel’s hungry. 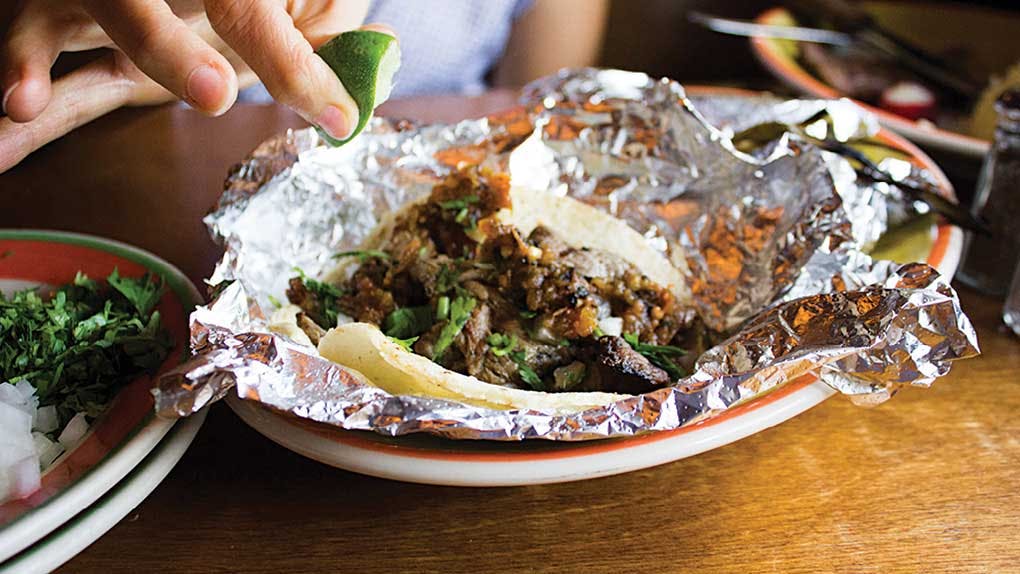 We love taquerias and greasy spoons, but occasionally we want to take folks out for fancy tacos. Although it has the look of an upscale restaurant in a major city, family-owned Palenque Grill started in Laredo and its McAllen edition has a distinctive South Texas feel. We like their Mar y Tiera served on a sizzling platter with fajita, shrimp, and all the accoutrements. This festive surf and turf combo demands to be washed down with a top-shelf margarita.  But if someone in your party is a wine lover, it’s hard to beat the combination of a full-bodied red with carne asada (ribeye) with sliced avocado on a fresh corn tortilla. 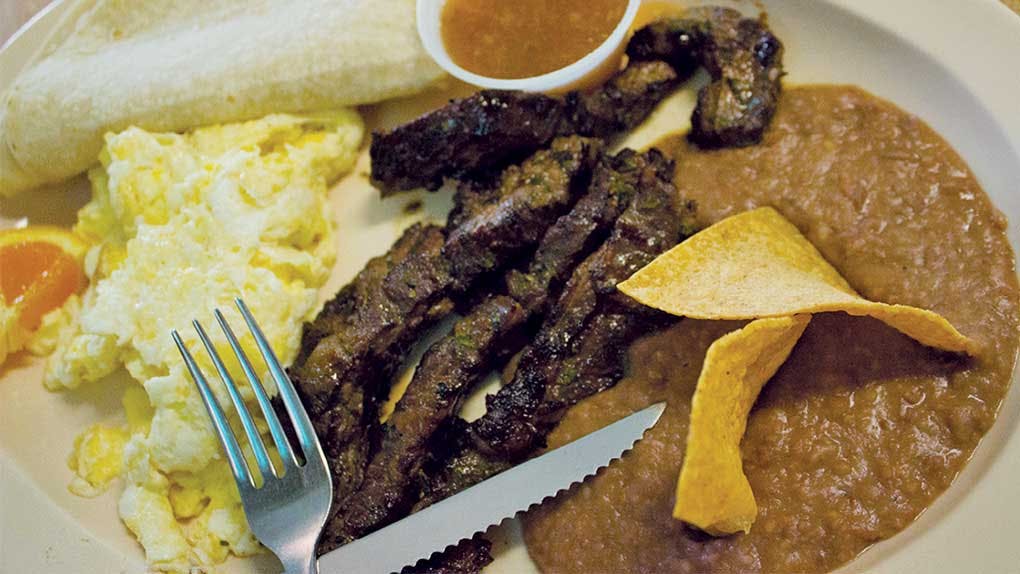 For thirty years Ted’s has been serving breakfast and lunch to surfers, beach goers, and fishermen alike. When we find ourselves facing a full day of frolicking in the sand or body-surfing the bay, there’s no better beginning than their fajita-and-egg taco. Granted, the tortillas are not freshly made and the eggs are not particularly fluffy (hear us out), but the tender fajitas are cooked just the way we like them—with a slight crunchy char on the ends. The other factor that makes this meat so good is the tangy garlic marinade, which remains a closely guarded secret despite our most charming efforts to coax it from the servers. Remember to ask for a side of the homemade salsa, prepared with just the right amount of cilantro. 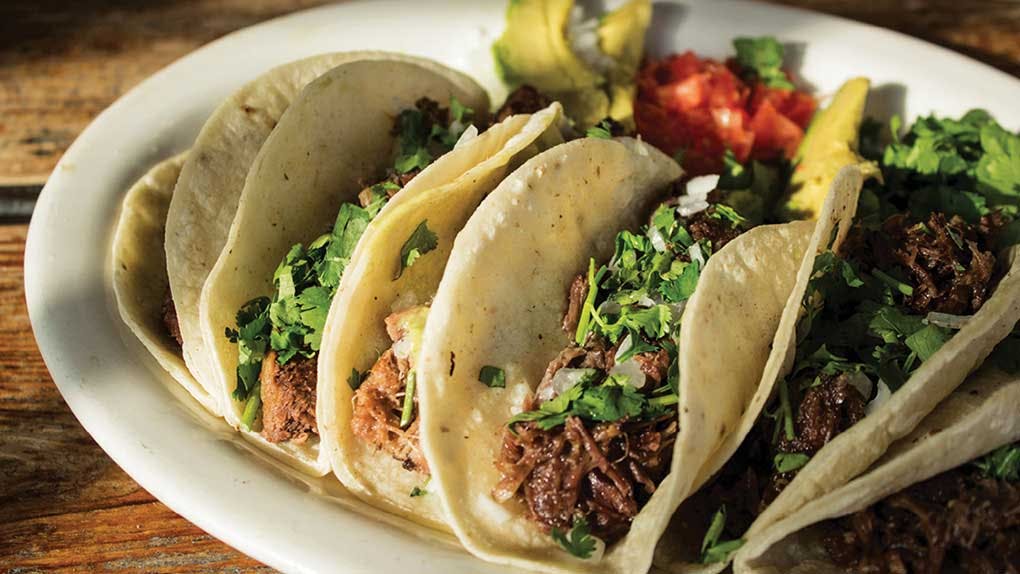 Barbacoa aficionados know that Vera’s is the only restaurant in the state, maybe the country, that still does real “barbacoa de cabeza en pozo con mesquite,” or cow’s head barbecue smoked in an earthen pit over mesquite coals (more on that history here). While the health codes do not allow new restaurants to cook in holes in the ground, sixty-year-old Vera’s has been grandfathered in for decades. (Don’t worry, the heads are wrapped in heavy-duty aluminum foil before being smoked.) Their menu is hand-written on a piece of poster board and also offers lengua (tongue), but we kept it basic with cachete (cheek), and an order of fresh corn tortillas. The dark shredded meat served in a red-and-white paper boat was actually silky and tender, not the least bit greasy. It might need a bit of salt, though, or salsa. Next time we will try something from the more adventurous side of the menu, perhaps an ojo (eyeball)  . . . 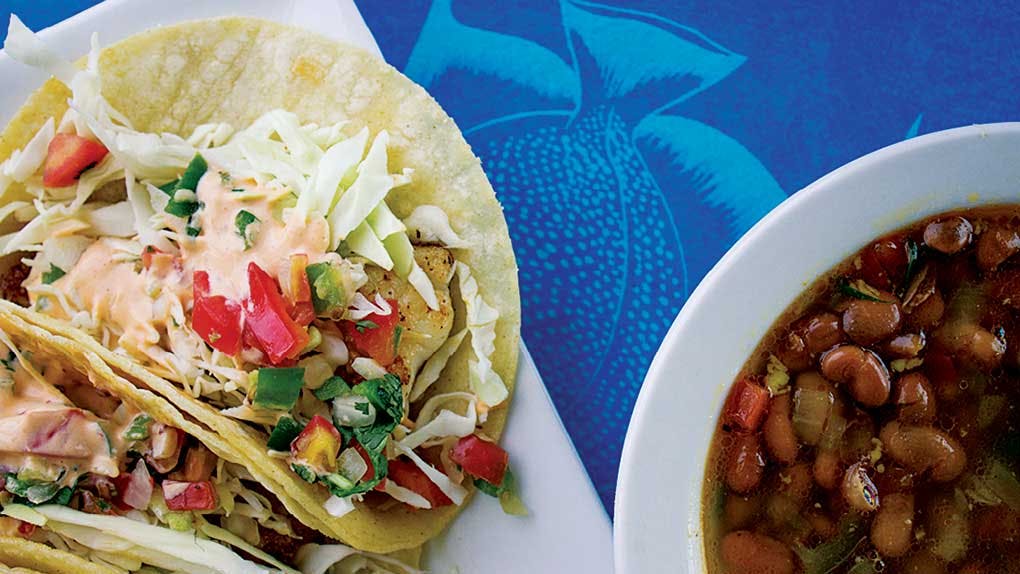 Many folks dream of retiring to South Padre Island and filling their days sport fishing in the Gulf, but what does a South Padre fishing guide actually do when he retires? Well, Captain Lee Roy opened a restaurant. Given his expertise with fish, it’s no surprise that his seafood tacos are super. The fish tacos are, ahem, stuffed to the gills with flaky meat, but our all-time favorite is an old standard—grilled shrimp with the traditional shredded cabbage and pico, wrapped in fresh corn tortillas.