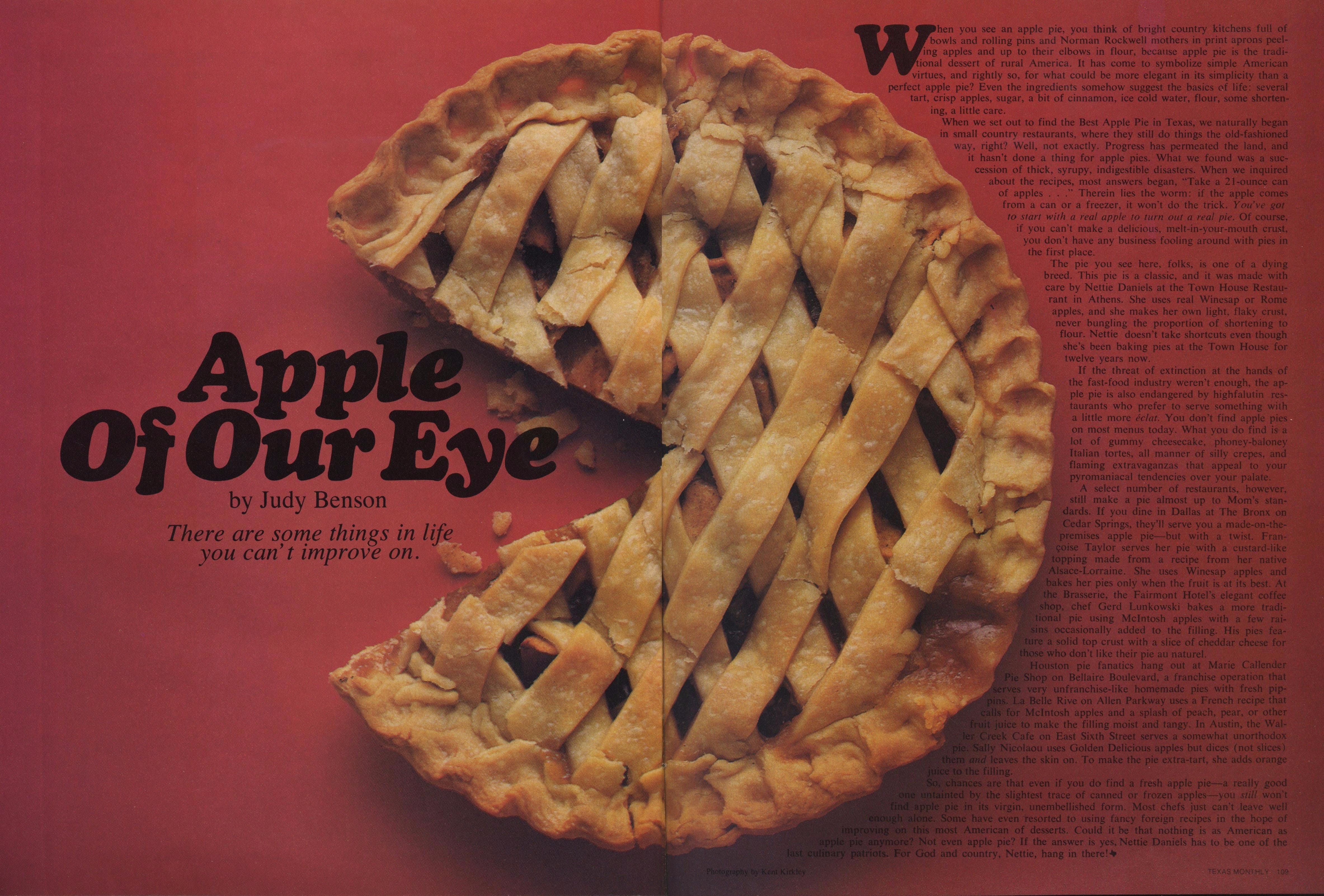 When you see an apple pie, you think of bright country kitchens full of bowls and rolling pins and Norman Rockwell mothers in print aprons peeling apples and up to their elbows in flour, because apple pie is the tradi­tional dessert of rural America. It has come to symbolize simple American virtues, and rightly so, for what could be more elegant in its simplicity than a perfect apple pie? Even the ingredients somehow suggest the basics of life: several tart, crisp apples, sugar, a bit of cinnamon, ice cold water, flour, some shorten­ing, a little care.

When we set out to find the Best Apple Pie in Texas, we naturally began in small country restaurants, where they still do things the old-fashioned way, right? Well, not exactly. Progress has permeated the land, and it hasn’t done a thing for apple pies. What we found was a suc­cession of thick, syrupy, indigestible disasters. When we inquired about the recipes, most answers began, “Take a 21-ounce can of apples . . .” Therein lies the worm: if the apple comes from a can or a freezer, it won’t do the trick. You’ve got to start with a real apple to turn out a real pie. Of course, if you can’t make a delicious, melt-in-your-mouth crust, you don’t have any business fooling around with pies in the first place.

The pie you see here, folks, is one of a dying breed. This pie is a classic, and it was made with care by Nettie Daniels at the Town House Restau­rant in Athens. She uses real Winesap or Rome apples, and she makes her own light, flaky crust, never bungling the proportion of shortening to flour. Nettie doesn’t take shortcuts even though she’s been baking pies at the Town House for twelve years now.

If the threat of extinction at the hands of the fast-food industry weren’t enough, the ap­ple pie is also endangered by highfalutin res­taurants who prefer to serve something with a little more éclat. You don’t find apple pies on most menus today. What you do find is a lot of gummy cheesecake, phony-baloney Italian fortes, all manner of silly crepes, and flaming extravaganzas that appeal to your pyromaniacal tendencies over your palate.

A select number of restaurants, however, still make a pie almost up to Mom’s stan­dards. If you dine in Dallas at The Bronx on Cedar Springs, they’ll serve you a made-on-the-premises apple pie—but with a twist. Françoise Taylor serves her pie with a custard-like topping made from a recipe from her native Alsace-Lorraine. She uses Winesap apples and bakes her pies only when the fruit is at its best. At the Brasserie, the Fairmont Hotel’s elegant coffee shop, chef Gerd Lunkowski bakes a more tradi­tional pie using McIntosh apples with a few rai­sins occasionally added to the filling. His pies fea­ture a solid top crust with a slice of Cheddar cheese for those who don’t like their pie au naturel.

Houston pie fanatics hang out at Marie Callender Pie Shop on Bellaire Boulevard, a franchise operation that serves very unfranchise-like homemade pies with fresh pip­pins. La Belle Rive on Allen Parkway uses a French recipe that calls for McIntosh apples and a splash of peach, pear, or other fruit juice to make the filling moist and tangy. In Austin, the Wal­ler Creek Cafe on East Sixth Street serves a somewhat unorthodox pie. Sally Nicolaou uses Golden Delicious apples but dices (not slices) them and leaves the skin on. To make the pie extra-tart, she adds orange juice to the filling.

So, chances are that even if you do find a fresh apple pie—a really good one untainted by the slightest trace of canned or frozen apples—you still won’t find apple pie in its virgin, unembellished form. Most chefs just can’t leave well enough alone. Some have even resorted to using fancy foreign recipes in the hope of improving on this most American of desserts. Could it be that nothing is as American as apple pie anymore? Not even apple pie? If the answer is yes, Nettie Daniels has to be one of the last culinary patriots. For God and country, Nettie, hang in there!