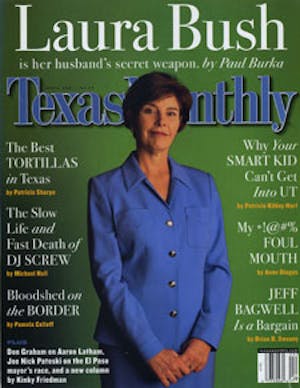 This cookbook was created specifically for the Texas Sesquicentennial celebration. Russell M. Gardner, a college student, spent more than sixteen months of research gathering three hundred recipes from famous Texans willing to participate. The outcome was a success. In these pages you will find recipes from such luminaries as Lady Bird Johnson, Roger Staubach, and Richard “Racehorse” Haynes.

Discovering what dishes these well-known personalities submitted (oftentimes it is the “Mrs.” whose name appears) is the most interesting aspect—you get a glimpse of that person’s taste. In some ways, it feels as if you have stumbled across a page in a personal diary. Here’s a sampling of the good eats from some of Texas’ most famous sons and daughters: