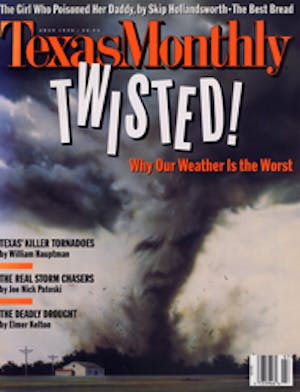 I LIKE TO SOP UP BARBECUE SAUCE WITH WHITE BREAD as much as the next person, but when it comes to making a sandwich fancier than peanut butter and jelly, I want something besides the doughy, pallid stuff that masquerades as the staff of life in supermarkets. That’s why I remember the day I discovered the Empire Baking Co., a then-new Dallas bakery, in 1993. Its display cases were stocked with gorgeous, crusty, golden-brown loaves that looked as if they had been sent over from Central Casting. I bought a couple to take home and, right there in my car, without leaving the parking lot, tore into one of them—the raisin pecan. I can still taste that bread—fragrant, moist, chewy, and full-bodied.

Although the Empire was not the first bakery in the state to make what has come to be called artisan bread, it was in the vanguard. Today, all of Texas’ big cities have one or more boutique bakeries that specialize in the kind of old-fashioned, handcrafted bread that was the norm before commercial bakeries sent it packing decades ago. The basic definition of artisan bread, which is also called rustic or European style, is simple: hand-shaped bread made from untreated flour, using natural starters in place of commercial yeast. The resulting bread is generally round or oblong—but never conventionally loaflike—and crisp crusted. Aside from those similarities, the variety is limitless. Artisan breads can be refined, light, and as full of holes as a Swiss cheese; they can be dense and dark. They can be made with white flour, whole wheat, rye, or any combination, plus any additional ingredients that strike the baker’s fancy: raisins, nuts, seeds, herbs, spices, whole and cracked grains, even a dollop of honey for sweetness or a splash of olive oil for sheen and flavor. They are European in origin—mostly French, Italian, and German—but the influence of American hippie breads is strong in certain healthful styles and there is always room for creativity.

Of course, artisan bread really isn’t new. Its renaissance began about three decades ago with the revival of interest in healthy, unprocessed foods. It was spurred on by Dallas-based La Madeleine (which has sold real French bread for 13 years and has now grown to have 39 locations in seven states), and in the past dozen or so years it has peaked with the appearance of places such as Nancy Silverton’s La Brea Bakery in Los Angeles, Ecce Panis in New York City, and Daniel Leader’s Bread Alone in Boiceville, New York (and now also in Austin, among a handful of locations). Unlike mass-produced bread, artisan bread is made from only four basic ingredients: untreated flour, water, salt, and a leavening agent. No chemicals such as dough conditioners, bleaches, or preservatives are in the flour. Commercial yeast is never mixed directly into the dough; if it is used at all, it is combined with flour and water to make a quick starter called a poolish (in French) or biga (in Italian). More often, a natural-yeast or a sourdough starter, also called a levain, is used. The resulting dough rises much more slowly, which gives it more moisture and flavor. For that reason, oil and sugar do not have to be added to the dough as they often are with regular bread. And—a nice bonus—artisan bread does not dry out or mold nearly as quickly as regular bread. Because of the intensive labor and the long production times—double-digit hours for proofing (the same as rising) as compared with just a few hours for ordinary bread—artisan bread isn’t cheap. You can expect to pay from $2 to $4 for plain loaves and up to a staggering $6 for specialty breads like calamata olive or chocolate cherry.

Here, then, is a look at the main artisan bakeries in Texas, along with a few of the breads that make them special.

For a city of its size, Dallas has surprisingly few true artisan bakeries. La Spiga’s is a modest Addison storefront, but the largest retail operation is in the central city at eatZi’s, the frantically popular new “home meal replacement” emporium. Here 26-year-old Peter Nyberg rides herd on all-day baking, which means customers can get minutes-old bread as late as eight at night. Specialties include apple walnut raisin breakfast bread, a small loaf with a winy, cidery taste; calamata olive loaf, stained purplish from the olives; and raisin pumpernickel, a moist, heavy bread as dark as bock beer.

By far the most aggressive artisan bakery in Texas is the Empire Baking Co., with two locations in Dallas, one in Fort Worth, and two in Houston. Owners Robert and Meaders Moore Ozarow, husband and wife, are not bakers by training but they are passionate about bread. “Our bread doesn’t smell yeasty,” says Robert defiantly. “It smells like wheat.” The former investment banker has strong opinions, one of which is that bread should not smell like a dinner roll. “All but three of our breads are made with natural starters,” he says, “and in those three, the amount of commercial yeast is minimal, just to give them a boost.” Specialties include farm bread, a mild, creamy-colored, starter-based bread; calamata, brimming with olives; and chocolate cherry, better than a cookie but available only on weekends. EatZi’s Market and Bakery, 3403 Oak Lawn, 526-1515; Empire Baking Co., two locations: main outlet at 4264 Oak Lawn, 526-3223; 3427 W. Seventh St., Fort Worth, 336-2004.

The Empire’s two locations supply Houstonians with ample quantities of artisan bread, and two other local bakeries fill in the gaps. The first is Three Brothers, which has been making its robust old-style farmer’s rye since 1949. Houston’s other major artisan bakery is the Manna Bread Company, owned by Swedish-born Magnus Hansson, age 33. Hansson’s mother and grandmother were good bakers, and he learned his chops from them. Like many artisan bakers, Hansson credits Nancy Silverton of Los Angeles’ La Brea Bakery with providing a good tip. “I made the starter that we use here the way she did,” he says. “I took organic grapes and fermented them until they started a yeast culture, and since then I’ve fed it with organic white flour and filtered water. It’s about six years old now.” When he opens his new retail outlet somewhere inside the loop this summer to supplement the wholesale bakery located in Missouri City (southwest of Houston), Hansson hopes to start correcting Americans’ meager bread consumption. “In Sweden,” he says, “each person eats nearly a loaf a day.” Specialties include pagnotta, an Italian farm bread; roasted onion, a round bread with a sweetish flavor; and thirteen-grain harvest, an eminently healthy, heavy wheat and rye loaf. Empire Baking Co., 1616 Post Oak Boulevard, 871-9779; Three Brothers, three locations: main outlet at 4036 S. Braeswood, 666-2551; Manna Bread Company breads can be found at Whole Foods and Kroger Signature stores in Houston.

“No two days are alike when you’re baking,” says Debra Auden, the head baker at and owner of Bakersfield. “You can’t follow a recipe blindly. If the weather is humid, you have to use less water. If it’s dry, more water. You have to touch the dough and feel how moist it is and correct the consistency.” Unlike most artisan bakers in Texas, Auden is self-taught. She impulsively decided to learn baking one day, and at first she delivered the loaves on her bicycle. Today she presides over a substantial retail and wholesale business that supplies numerous eating establishments, including Restaurant Biga, which is owned by her husband, chef Bruce Auden. Her breads are often peasantlike, with thick, heavy crusts, but others go the modern route, with a multitude of spices and herbs. Specialties include Italian peasant, a plump mild bread; Southwestern, a round loaf lightly flavored with bits of red chile and corn kernels; and linzerbread, a sweet, spicy oval that smells like a mincemeat pie. Bakersfield, 5305 McCullough, 822-9963.

Perhaps because of its abiding interest in all things wholesome, Austin has more artisan bakeries per capita than any other Texas city. Of these, Sweetish Hill is the elder statesman. It has been baking European breads for 21 years, concentrating for the past 6 on natural-starter types. Patricia Bauer-Slate (who is co-owner with baker Jim Murphy) laughs that the original wild yeast for their sourdough starter was captured years ago in the apartment where she and her husband Joe lived. Sweetish Hill’s two-olive loaf is spectacular; its baguettes are amber-crusted wonders; and its serrano romano adds Texas heat to any sandwich. Texas French Bread, now fifteen years old, has been seriously turning out artisan breads since 1993, when owner Judy Willcott brought in a master baker from New York to develop new recipes. Texas French Bread’s ciabatta is a mild, light, tender Italian bread that is terrific dipped in olive oil, and its calamata olive is a salty, dense loaf that makes great pastrami sandwiches. One of Austin’s most bountiful purveyors of European-style breads is Whole Foods Bakehouse, where Bakehouse president and baker George Eckrich presides over the production of some twenty artisan breads a day. Constantly analytical, he points out the features of a superior loaf: “The crumb”—that’s the interior of the bread—“should spring back when you poke it,” he says, “and the flavor should not be a monotone. The crust is what you taste first; then the milder taste of the crumb.” Whole Foods’ pane paesano is a light tan dome with big holes and a strong, pleasantly fermented flavor; its ficelle is a chewy sourdough stick that kids especially love. In Austin, aside from the above places, you can also get decent artisan-style bread at Central Market.

But the Austin bakery that has sparked the city’s present fascination with artisan bread is the newest, Bread Alone, an odd-couple collaboration between the Austin-based deli chain Schlotzsky’s and the original Bread Alone of Boiceville, New York. Here, every morning at four o’clock baker Rebecca Rather arrives to check on the progress of the loaves in Bread Alone’s wood-fired oven. Based on an ancient design and built on-site by a Spanish craftsman, it produces intense radiant heat, which, combined with the steam regularly misted into the cooking space, produces Bread Alone’s fabulously crisp crusts. Says Rather: “Our bread wouldn’t be the same without this oven, I swear.” Specialties include a superior calamata olive; walnut, a heavy, compact bread that goes wonderfully with apples and cheese; and raisin pecan, a dense bread full of nuts and fruit. Sweetish Hill, two locations: main outlet at 1120 W. Sixth, 472-1347; Texas French Bread, eleven locations: main outlet at 2900 Rio Grande, 499-0035; Whole Foods Bakehouse, two locations: main outlet at 601 N. Lamar, 476-1206; Bread Alone Bakery and Coffee House, 218 S. Lamar, 477-5858.