It was difficult to breathe, stuck in a cab on the smoggy streets of Mexico City, and I couldn’t have been happier. I’d been trying to get to the sprawling metropolis—the center of the taco universe—for more than five years, ever since dedicating myself to the exploration of tacos under the banner of the Taco Trail, the blog I’d launched in Dallas to explore all things tortilla-wrapped. Every taco I’d eaten, every taqueria review I’d written, every Spanish-language reference book I’d read—they’d long been undercut by the feeling that I couldn’t be truly taken seriously until I’d journeyed to the source. I knew I had to seek out firsthand those elements  that had inspired the tacos I ate every day.

So there I was at last, at just over 7,300 feet above sea level on a winter day in early 2015, alongside two trusty companions—Dallas photographer Robert Strickland and taqueria owner Nick Zukin, who runs Mi Mero Mole, in Portland, Oregon—with whom I’d devised a tasting itinerary of twenty taco spots to visit over two and a half days. Nick, who has been traveling to Mexico’s capital almost yearly for the past fifteen years, is a connoisseur of guisados, the sweeping range of stews, stir-fries, and homey dishes that represent one of Mexico City’s most popular street foods. Paired with tortillas, these fillings, served until roughly 2 p.m., are the equivalent of breakfast tacos and can provoke the same blissful response from a chilango (a Mexico City resident) as slipping into a warm bath. Nick had played a critical role in creating our list, which included market stalls, taquerias, and full-on restaurants; our focus would be on two of the city’s great specialties: the taco al pastor and the taco de guisado.

I knew not all the tacos would be great, of course. But by some stroke of luck, we got the weakest samples out of the way on the first day, at Super Tacos Chupa Cabras, a food-court stand squeezed under a highway in the Coyoacán neighborhood. The taqueros, dressed in traditional white uniforms and aprons bearing an image of the namesake beast, handed us plated orders of steamed fatty cabeza, which we customized with toppings like frijoles, nopales, and salsas with heat indexes that ranged from mild to regrettable. The tortillas in our hands tore like ribbons of weak wallpaper.

This disappointment was soon alleviated, however, at Tacos Don Fello. Located in the Mercado de Antojitos, near Coyoacán’s main plaza, the market stall, which has a history going back to the fifties, also slings tacos de cabeza, with sesos, lengua, ojo, and maciza (leaner cuts). We went for an order of surtida, or the works, marveling not only at the varying textures of the meats—some parts chewy, some parts silky—which were dressed in tomatillo salsa, but also at the multitasking talent of the lead taquero, who scooped the filling into doubled-up corn tortillas with one hand while holding a cellphone to his ear with the other.

We set off in search of guisados the following morning, stopping first at Tacos Las Cazuelas, an unmarked wood-frame stand at the corner of Londres and Havre in colonia Juárez. To a Texan, some guisados might sound familiar: picadillo, weenies and eggs, chorizo and potatoes. Others, not so much: cauliflower fritters, rajas con crema, stewed chard. At Las Cazuelas I ordered a taco with bistec en salsa pasilla—tender, squiggly slices of beef in a dark chile sauce chock-full of coffee and chocolate notes, resting on wonderful-smelling corn tortillas. I began to understand how just the mention of a Mexico City guisado could inspire rapture.

Tacos Hola, in La Condesa neighborhood, has been dishing out guisados for more than forty years. Its menu is dozens deep, and, as owner David “El Güero” Millán instructed from behind the counter, it comes with one rule: one taco at a time. A smoky rajas con crema—thin strips of roasted poblanos cooked in light cream—on a helping of yellow rice was all I needed anyway. (And the rice was handy: it helped soak up salsa, saving my shirt, and added texture.) It’s not unusual in Mexican tacos to see mashed potatoes, french fries, or whole pinto beans piled atop two or three meats. I had seen those garnishes in photos, but now the lineup was within arm’s reach. An American taco purist might shiver at the variety beyond onion and cilantro. I was practically vibrating with joy.

At a nameless guisado stand on the corner of Tlaxcala and Chilpancingo, an unplanned stop, a taco de albóndiga—a 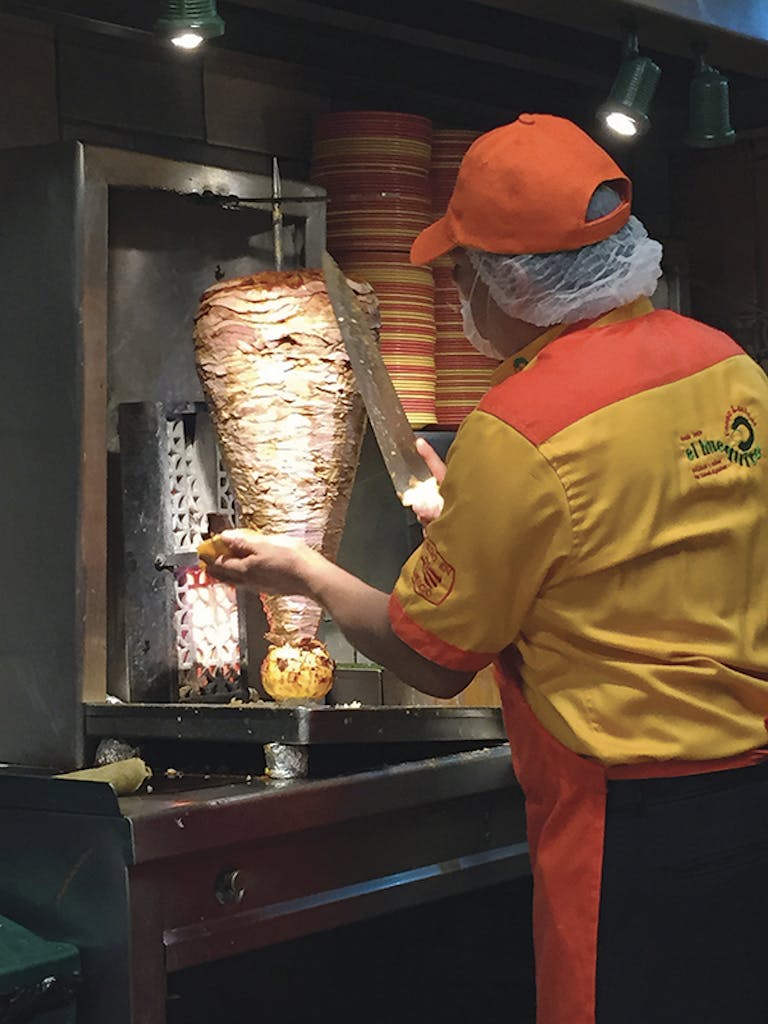 solitary meatball with a gauzy tomato salsa over rice—gave off the aroma of a treasured Sunday dinner. It was so stunning that as I bent over to toss the paper liner into the trashcan, I knocked my head on the stand’s metal counter.

At Restaurante El Bajío, in the northern Azcapotzalco neighborhood, we got a survey of classic Mexican flavors. This was a break from a strict taco diet, with stellar warm carnitas and pillowy, bluish-green gordas infladas (“inflated fatties”). Resembling uncrimped puffy tacos, they were made with a masa that was stuffed with black beans and flash-fried. They were every bit as delicate as San Antonio’s signature taco and left me smitten. (Of course, to a Texan, is there anything quite as magical as a puffy taco from the Alamo City?)

Our journey also had us eating plenty of tacos dorados, or fried tacos, which we found just about everywhere on the streets and in the markets. These came secured with toothpicks or rolled. At Con Sabor a Tixtla, a family restaurant specializing in the cuisine of the owners’ native Guerrero state, the potato-filled tacos we sampled were rolled and drowned (ahogados) in a broth cooked with chipotle, potatoes, and chicken wings, then finished with lettuce, radishes, tomato, red onion, and an avocado wedge. The flavors were distinct but not flashy. This was not the stuff of family taco night, put together from a box off a supermarket shelf. It was glorious.

I could go on with a taco-for-taco recounting of our exploits, but I won’t, preferring to share only the most memorable bites. Our last night was defined by the taco al pastor, perhaps the city’s most famous taco. At El Huequito, one of the taquerias that claims its invention, we put in our order, then sat back and let the trompo operator dazzle us. He turned up the flame for a quick crust on the marinated pork, sliced the meat, and finished our order with a shot of drippings. This kind of show isn’t common in Texas—health departments aren’t so keen on open-flame spits—which made it all the more breathtaking. At El Vilsito, we encountered twin trompos, these also shimmering with fire. Here, the pork shavings were a dark magenta, resting beneath the standard cilantro, onion, and pineapple on a corn tortilla. We couldn’t resist also trying the menu’s deluxe offerings, including the bistocino, a mix of curled bistec and floppy pink bacon. At $5.37, it was the most expensive item. Whimsy can be costly on either side of the border.

Street flair then gave way to gussied-up tradition at La Casa de los Tacos. The restaurant is co-owned by Alejandro Escalante, a friend and the author of La Tacopedia, a compendium of Mexican taco styles. On one plate, brisket tacos—the meat sliced thin, with a pink center and a bumper of fat—bore a trio of scallion stalks. The richness was cut with a pour from one of the six mezcal bottles scattered across our table, where we’d been joined by a few other acquaintances for the beginning of a long goodbye. On another plate were black bean–filled ancho chiles garnished with cheese, caramelized onions, cream, and nutty chapulines, or roasted grasshoppers. I’d never been so happy to have insect tibias wedged between my teeth.

The American idea of the taco is growing but still narrow—“novelty” and “gringo” are often used to describe anything beyond pork, beef, or chicken—and yet in less than three days I’d encountered a variety greater than I could have imagined finding back home. I felt fulfilled, more open to possibility, hungry for greater culinary crossover between Texas and its neighbor. I’d developed a need to hunt for guisados across the Lone Star State—I craved more—and I’d been reminded of the platonic ideal of an al pastor. Sipping mezcal and crunching on more chapulines, I smiled. It was a shame, I thought, to have to wake at five the next morning for my flight back home. If only I had one more day in Mexico City.