In 2016, the James Beard Award-winning chef Chris Shepherd unveiled a novel restaurant concept in Houston’s busy, culturally diverse Montrose neighborhood. Called One Fifth and located in a former church, it was designed to change cuisines every year for five years, after which it would cease operations entirely. Basically, it was a restaurant incubator. The first concept was called One Fifth Steak (no explanation needed); the second was One Fifth Romance Languages (focusing on the cuisines of Italy, Spain, and France). On July 31, Romance Languages will be shuttered for a month while the staff learns new recipes and the dining room is completely redecorated. On September 1, it will reopen as One Fifth Mediterranean, focusing on Eastern Europe, the Middle East, and North Africa. Texas Monthly food editor Patricia Sharpe recently chatted with Shepherd about how things are going with the One Fifth concept and what to expect when the new iteration opens.

Texas Monthly: You changed your mind since last year. Initially, you were going to do a seafood restaurant for your third concept. What happened?

Chris Shepherd: It actually goes back to Hurricane Harvey. After it hit in 2017, a lot of restaurants in Houston were forced to close. It seemed to me that seafood restaurants suffered a lot—not a good sign. Also, while I like to eat fish, and I like to cook fish, I just don’t want to eat fish all the time. What I do want to eat all the time is Mediterranean.

TM: Well, there’s a lot of seafood in Mediterranean cuisine.

CS: Exactly. We can still do plenty of fish. Basically, we just broadened the concept.

TM: There are more than twenty countries bordering the Mediterranean. How do you narrow your menu? Do you do the greatest hits, or do you take a chance on little-known dishes and try to surprise your customers?

CS: Obscurity is good. I think people came to trust us at Underbelly [his first solo restaurant, which closed in March]. They wanted to be wowed; they expected us to do something different, like the braised goat and Korean dumplings that became such a hit. We’re not taking the beaten track. And when we do the obvious things, like hummus and baba ghanoush, they will be at the highest level.

TM: Did you travel doing research for this restaurant?

CS: Yes, if you count going back when I was the chef at Catalan, up until 2011.  I went to Greece and Turkey, Morocco, Croatia, and Albania, too—[and] Tunisia. And of course, over the years, I’ve been to Spain and France and Italy. I like the flavors from the eastern end of the Mediterranean a whole hell of a lot. They tend to be robust, simpler than, say, French. Plus, you’ve got all these appetizer type things you can serve as mezze plates. And you can change them up all the time. It’s going to be so much fun.

TM: What about travel to Mediterranean restaurants in the United States? Where did you go?

CS: There were three of us—me, plus Nick Fine, our culinary director, and Matt Staph, our chef de cuisine—and we went to two favorites, Maydān, in Washington, D.C.,  and Zahav, in Philadelphia At Zahav, which is Israeli, their hummus is different from everybody else’s, and, man oh man, is it delicious. They have a special blender and one person who makes it fresh, with chick peas and this incredible tahini (they spell it tehina) every two hours all day long. It’s never refrigerated because it gets used up so fast.

TM: So it’s like a Mexican restaurant having a tortilla lady?

TM: Will you have a hummus person?

CS: Something like that. Or it might be somebody making bread. At Maydān, which focuses on Middle Eastern and North African cuisine, they had these two wood-fired clay ovens, a little like tandoors, and there was just one guy doing flatbread all night long. It reminded me of naan. I asked, how many of these do you make a night? And they were like, five hundred. They’ll do four hundred covers a night, and everybody gets at least one. It’s really impressive to see.

TM: Olive oil has to be a huge part of your menu. Are you going to have oil from different countries?

CS: I We are going to get a whole bunch of samples and figure out what is right for the flavor profile we want to achieve. There will probably be three days where we’ll taste fifty different oils.

TM: What else are you obsessed with?

CS: Tahini. There is only one company that I am going to buy from, and it’s Soom, in Philadelphia. It’s a company owned by three sisters, and the stuff they make is beautiful. It’s is thick and smooth and super-emulsified, and it doesn’t have a huge layer of oil on top that you’ve got to dig down through. I got turned onto it, and now I use it at home and at UB Preserv [one of his other restaurants]. We use it there as the base for a lot of Chinese dishes.

CS: Yes, think about it. It’s made from sesame seeds, and sesame oil is used in Chinese cooking. Japanese, too. One night I went to Kata Robata, and Hori [chef Manabu Horiuchi] gave me this lobster ramen that he had thickened with tahini. I looked at him and I was like, excuse me? And he was like, it’s sesame, chef, it’s sesame. And I was like, son of a bitch, you’re right. And then my mind immediately went down this wormhole where I realized you can pretty much use sesame anywhere. I mean, you could even use it in mole sauce if you wanted to.

TM: Because there are nuts in mole?

CS: Yes, and actual sesame seeds too. It could be the base for so many different things. Soom also makes this sweet chocolate tahini spread that will change your life.

TM: Oh my god, sort of like a Reese’s Peanut Butter Cup? You ought to do a dessert with it.

CS:  Victoria Dearmond, our pastry chef, is already working on it. Do you know the traditional Israeli or Jewish bread called babka? It’s a sort of swirled or twisted chocolate loaf. Victoria made some monkey bread out of it, and, oh my gosh!

TM: One thing you’re famous for at One Fifth are these huge presentations. At Steak, you had the baller board with a ridiculous number of meats and sides. At Romance Languages, you have a seafood tower. Are you continuing the tradition?

CS: Yep. Mezze. I think the equivalent is going to be this onslaught of small dishes all over your table, because that style of eating is typical of those cultures. It’s like bam! bam! bam! The table is covered, and you’re like, oh my god! This is awesome!

TM: One Fifth Mediterranean is the third of your five concepts. But you’ve been very mysterious about the final two. When do you reveal them?

CS: I’m going to wait till the last night of Mediterranean—July 31, 2019—to make the next announcement. And a year after that for the final one.

TM: So it’s like Beyoncé and Jay-Z dropping an album with no advance notice?

CS: Yeah, pretty much that way.

TM: You started the One Fifth to test concepts without a long-term commitment. How’s that working out for you?

CS: You know, we learned a lot, but it was a challenge every day. The steakhouse concept was fantastic, it worked, and we’re basically turning that idea into Georgia James [the restaurant he’s opening in August to replace Underbelly]. Romance Languages, honestly, I don’t think so. It was great and all that, but I need to feel like I want to eat in a restaurant every day; I need that kind of excitement. And, also, maybe these big hands are just not made for rolling out delicate sheets of pasta [laughs].

TM: So it’s as much about the emotion as the success?

CS: Absolutely. The concept has to drive my passion. Do I love this? Do I wake up in the middle of the night dreaming about this food? After we got back from Philadelphia, I was texting Matt at 7:30 in the morning, saying, I know we just ate a ton of hummus, but I really want hummus today. And he was like, yeah, I was thinking about hummus last night. That’s how I know we’re doing the right thing. 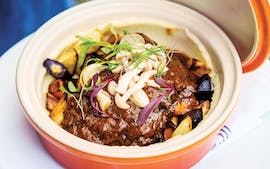 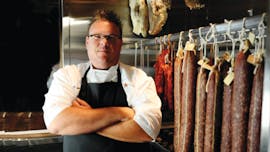 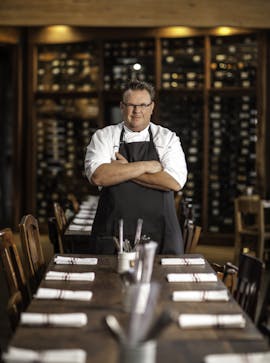