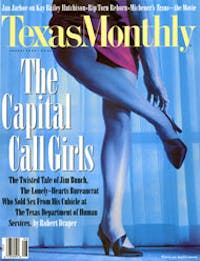 These are the days when the rich, smoky aroma of roasting green chiles begins to fill the air of far west Texas and New Mexico. It will linger through October, a portent of seasonal change as precious to residents of the Southwest as the changing leaves are to New Englanders. The delicious smell is created by the roasting of green New Mexico chile peppers in huge round wire bins. The process infuses the flesh of the six- to nine-inch peppers with a distinctive earthy character, complementing the delicate burn that settles in slowly around the tip of the tongue and the mid-palate—a sensation considerably less fiery than biting into a jalapeño or serrano, much less a habanero.

The roasting ritual takes place along roadsides, in front of grocery stores, and on farms with hundreds of acres of chiles under cultivation—which, in Texas, are found in the vicinity of Fabens, southeast of El Paso; in the Pecos Valley; around Lubbock; and in the South Texas winter garden. The phenomenon is spreading: Every fall, the Chuy’s chain buys twenty tons of New Mexican Hatch greens for green chile festivals at its restaurants in Austin, Dallas, and Houston.

Texas’ infatuation with green chiles is relatively recent compared with New Mexico’s. The chiles have been cultivated there for more than four hundred years, and today, 29,000 acres—almost three fourths of the state’s vegetable acreage—are planted in chiles. To fully appreciate them, one should follow the Rio Grande from El Paso ninety miles upstream to the Hatch Valley, a verdant strip along the banks of the river slicing through the New Mexican high desert. The river, the slightly alkaline soil, the 4,050-foot elevation, and the combination of sun-baked days with temperatures in the mid-nineties and crisp, cool nights conspire to create peppers so remarkable that northern New Mexicans refer to all green chiles as Hatch chiles.

The valley consists largely of small, individually owned farms, many of which have produce stands along New Mexico Highway 187 toward Truth or Consequence of Highway 185 to Las Cruces. The center of chile activity is the town of Hatch (population: 1, 084), which is just west of Interstate 25 and is known as the Chile Capital of the World, a claim no Texas town has challenged.

That’s because Texans have a thing or two to learn about chile appreciation, or so thinks Jim Lytle, a brawny cowboy-farmer with a prominent moustache. “The first thing I’m gonna tell you is New Mexico grows a hell of a lot better green chile than Texas,” he says. “Texans had to get the seed from us in the first place.”

Lytle is a third-generation chile man who has 250 acres of chiles. Seven years ago he opened his retail store, the Hatch Chile Express, at 622 Franklin (mail order: 505-267-3226). In addition to the pepper-related novelty merchandise native to his part of the country—decorative strings of dried red chiles, chile jellies, chile earrings, Burnin Luv bikini underwear—Lytle’s store is stocked with fresh chiles (in season), frozen chiles, chile seeds, and chiles in dehydrated, powdered, and other forms. Among the 27 varieties Lytle sells are the extra-mild NuMex Conquistador, the mild NuMex 6, the medium-hot Big Jim (his best-seller, which is named for his father), the hotter NuMex Sandia, and the even hotter Española and Lumbre (or “fire”) chiles.

Heat, Lytle contends, is a deceptive criterion for chiles. “That’s the difference between Texans and New Mexicans,” he says. “A Texan thinks that a chile has to burn the hell out of you to be good. The heat has nothing to do with good flavor. If you put something in your mouth that’s going to put a blister on your tongue, are you going to have just one bite or enjoy a whole bunch of it?”

Well, I had to admit my ulterior motive for visiting Hatch was to enjoy a whole bunch of it. The best thing about Hatch isn’t the chiles in the fields, stacked on the side of the road, or sold in the pepper shops, but rather the chiles on the plates of the town’s cafes. This is where you reach the pleasant conclusion that green chile enchiladas are the regional equivalent of chicken-fried steak.

My day of eating began at Gloria’s, a nine-table cafe at East Hall and Foster, with traditional New Mex-Mex breakfast fare—huevos rancheros floating in a thick verde sauce, and eggs over easy with a side of green chiles. Also recommended: green or red enchiladas and, Lytle’s favorite, a ground-beef burrito served “wet,” drenched in green chile sauce.

For lunch, I headed to the six-table Pepper Pot, on New Mexico Highway 187 on the north side of town, where the home-style green chile enchiladas are prepared flat—the corn tortillas layered with chiles and cheese and sprinkled with onions.

Rosie’s Kountry Kitchen, on West Hall, a third cafe recommended by locals, will have to wait till my next visit. The night before I arrived in Hatch, I’d enjoyed green chiles in the charming adobe town of Old Mesilla—outside Las Cruces—and I ate some more there on my way back to El Paso. But no matter how fanatical a chile head may be, there comes a time when one more plate will cause burnout. A day on the chile circuit did just that to me.