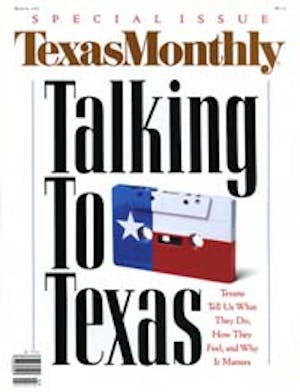 In the years following the Vietnam War, a wave of newcomers graced Texas’ shores. Vietnamese immigrants arrived in such ports as Houston and Galveston, many settling in San Antonio and Dallas or in Port Arthur and other coastal cities. They brought with them a cuisine that is a sophisticated mix of French and Asian antecedents and that, with its emphasis on fresh seafood, hot chile peppers, and cilantro, was easily adapted to their new home.

Seafood is a staple in Vietnam, whose coastline extends for more than a thousand miles along the eastern end of the Southeast Asian peninsula. The national palate also has been shaped by the gourmet traditions of occupying powers: the Chinese, from whom the Vietnamese adopted cooking with a wok and eating with chopsticks, and the French, who introduced them to ingredients like butter, shallots, and asparagus. The Vietnamese incorporated curry and other Indian spices into their cookery through contact with neighboring Laos, Cambodia, and Thailand, all of which at one time had been under the cultural influence of India.

Yet the Vietnamese have always maintained a separate culinary identity, and their food has its own distinct flavors and characteristics. Many dishes rely on nuoc mam (fish sauce), a salty amber-colored liquid produced commercially by fermenting layers of anchovies and salt in wooden barrels. Used in cooking or as a table condiment, nuoc mam is also combined with fresh lime, chiles, garlic, vinegar, and sugar to make nuoc cham, the sauce that accompanies most Vietnamese meals. Another characteristic is the presence of contrasting textures in a single dish, such as cooked beef or noodles with crisp lettuce.

Aesthetics are also important in Vietnamese cooking, says Paula Tran. A Tennessee native who lives in San Antonio with her Vietnamese husband, Tran has written a cookbook, Living and Cooking Vietnamese (Corona Publishing Company, $8.95, available in May). “There’s a great concern with making the food as visually appealing as it is tasty,” she says. “The Japanese arrange food according to location –– everything has a place. The Viets, though arrange food according to color, putting together pretty combinations. A Vietnamese cook will work for some time setting up a platter –– layers and layers of bean sprouts, pork, pickles, radishes, cilantro, tiny bead threads. Then you roll them up in a lettuce leaf and dip the whole thing in a bowl of fish sauce.” Another cookbook, The Foods of Vietnam (Stewart, Tabori, and Chang, $35), by Vietnam-born Nicole Routhier, appeared last fall. Photographs of beautifully composed dishes accompany the recipes, making them all the more compelling to home cooks.

American converts to Vietnamese fare are often attracted to its healthfulness. Simmering is the most frequent cooking method, and even in stir-fries, only small amounts of oil are used. Sauces are seldom thickened with cornstarch (as in Chinese recipes) or with flour or cream (à la French methods). Vegetables are lightly cooked or served fresh in salads or on vegetable platters.

When Kim Nguyen came to Houston eleven years ago, she worried that she wouldn’t have the right ingredients for the dishes she had prepared in Vietnam. But she found everything she needed, and now, at Vietnam Kitchen, her restaurant on Milam, she serves food good enough to win the approval of former New York Times food writer Craig Claiborne.

Vietnam Kitchen has found favor with local gourmands too. At lunchtime the dining room fills up with businesspeople from the surrounding Vietnamese enclave. They eat shrimp and bits of squid from huge hot pots, then linger and converse before returning to their shops and offices. Non-Asian downtown workers lunch on bowls of pho –– a rice-noodle soup with beef –– and plates of shrimp with straw mushrooms, manipulating their chopsticks with practiced grace.

Kim found it easy to adjust to the new varieties of seafood in Houston. “Some are different, but some fish look good,” she says. “I can cook like in my country hot-and-sour fish soup –– I use catfish. Also for fish sauce in hot pot. The crabs in Vietnam are like king crabs, only smaller. But the crabs here are good.” The French accent in Kim’s cooking comes through in her use of butter. “I use oil just a little, but French butter more,” she says. “I pay five or six dollars a can for French butter. Some people use margarine, pay fifty or sixty cents for four sticks. Customers know the difference.”

Most of the specialty items Kim needs are available at Asian groceries. “At first it was hard to find some things, but now there are many Vietnamese here, and they import from other Asian countries,” she says. Only Vietnamese rice paper –– round tissue-thin crêpes made of rice flour, salt, and water –– will do for wrapping Vietnamese spring rolls and summer rolls, which are similar to the Thai versions. “Thais copy Vietnamese on rice paper for summer rolls,” Kim remarks. She does, however, concede the excellence of Thai rice: “We use jasmine rice from Thailand. Very good rice.”

Kim has a repertoire of two hundred dishes, and she will recommend menu items she believes will interest a diner. A request for seafood brought soft-shell crabs, sautéed in butter and served on a bed of crisp leaf lettuce with tomato, onion, and cilantro (also called coriander leaf or Chinese parsley). The greens, dressed in butter, are gathered up in chopsticks to eat. Frogs’ legs, another Vietnamese favorite, were sautéed in butter. A simple dipping sauce with the crabs and frogs’ legs consisted of lemon juice, salt, and black pepper. Salt-baked shrimp, which were light and not at all salty, were served on a bed of lettuce with caramelized onions. A hot-and-sour shrimp soup –– tart with tamarind and infused with aromatic rau om, a garnishing herb –– held bean sprouts, tomato, celery, pineapple, and okra. (“I was afraid when I come here that there is no okra,” Kim says.) Flecks of chile pepper lent a bite, augmented by serrano peppers from a bowl on the table.

Up a block and around the corner from Vietnam Kitchen is a Vietnamese shopping center. Down the corridor is Hoa Binh, a Vietnamese grocery. Merchandise is crammed into the space inside, with cans of coconut milk filling up half an aisle. Barbecued duck, chicken, and pork are sold at a small stand. A meat counter stocks cuts of pork, pigs’ trotters with hocks attached for stewing, and all manner of seafood –– buffalofish, mackerel, shrimp, pomfret, and catfish. Produce bins brim with cilantro, gingerroot, bean sprouts, herbs, and serrano peppers, which are identified by their Vietnamese name and also as Thai peppers. (The Portuguese brought the fierce capsicum to Asia from America in the seventeenth century, and it established itself in Thailand.)

Aransas County also has a sizable Asian community of predominantly Vietnamese, with a few Laotians and Cambodians (about 360 Asians in a population of 18,000). Most are shrimpers; in fact, the shrimp-boat basin at Fulton is manned almost exclusively by Vietnamese. A Vietnamese grocery in Rockport is not nearly as big as Hoa Binh, but cooks can buy rau om and Victorious Piggy-brand dried tamarind from Thailand for a hot-and-sour-soup.

Hue Nguyen (no relation to Kim) manages Kim Video rental shop on Texas Highway 35. When Hue first came to Rockport in 1986, she could not find local sources for the fresh herbs she was used to cooking with. “In a small town like this, I used to order spices I need in Houston or make a trip once a month to get what I wanted,” she says. “Now spices come from Taiwan, and they make it so convenient. You just put it all in, like a mix. But I use fresh ingredients.”

Many Vietnamese around Rockport have solved the problem of finding fresh herbs for cooking by planting herb gardens. Thao Le grows long stalks with an unmistakable allium zing in his family’s garden. “That’s like onion, but it’s not onion,” he remarks. A green herb, which Thao says is “like a potato, but it’s slimy and sticky,” grows in water standing in children’s plastic wading pools and in open ice chests. Faced with an unfamiliar herb in a neighbor’s garden, Thao explains, “His mom’s from the north. They eat different.”

Some of these homegrown herbs are showing up at farmers’ markets, where non-Asian cooks are discovering their merits. Thus the rest of us also benefit as Texas’ Asian population strives to maintain the old ways of cooking.

Cultural Exchange Domain a supplement to the March 1990 issue of Texas Monthly.