This story is a part of Texas Monthly’s Taco Week, a series dedicated to proving that Texas is the center of the taco universe.

I fell in love with the avocado margarita the way many Texans do: by taking a tentative sip of a friend’s at Curra’s Grill, in Austin. Tentative, because it didn’t look or sound like anything I would want to drink. The color, a cross between lime and chartreuse, seemed almost unnatural. (Was it glowing?) The consistency was thick and creamy, so much so that the straw stood stick-straight in the middle. And of course there was the main ingredient. Who drinks avocado anything?

But after I took one taste, everything made sense. It worked. The concoction was smooth and refreshing, and unlike most fruity frozen margs, it showcased the reposado tequila rather than camouflaging it. I promptly ordered my own, which paired well with my shrimp tacos. The rich beverage offered a nice counter to the seafood, and the creaminess cooled off the spice.

New to the city, I began frequenting the South Austin Mexican restaurant after that first encounter twenty years ago. A lot has changed since then. I met my future husband, and we hired Curra’s to cater the rehearsal dinner, introducing my Carolinian relatives to cochinita pibil and mole enchiladas. We had a son and bought a house just blocks away from Curra’s, so it became a regular destination for our family. When we moved a few miles north two years ago, we were thrilled to learn that Curra’s would be following us, opening a second location in Hyde Park. Throughout it all, the avocado margarita has remained my go-to order, my imbibe-or-die.

Curra’s bills itself as the “home of the avocado margarita,” so cofounder Jorge Garcia often tells the drink’s origin story. Garcia’s brother dared him to come up with a way to add avocado to the restaurant’s lineup of fresh-fruit margaritas. The avocado, after all, is a fruit. As brothers are wont to do, Garcia accepted the challenge and was pleased with the results, especially after adding a pinch of cilantro.

In a booth in the garden room of the new Hyde Park spot, which is run by his son Daylon, Garcia humors me by recounting the story one more time. But then he adds something surprising: it took several years to turn customers into believers. He gave away samples—something they still do for first-timers. “I finally said, ‘I’m going to get very aggressive behind this drink because I think we have something here,’” he recalled. He decided to run a provocative ad in Texas Monthly (my future employer).

I had never seen the ad, and Garcia wasn’t sure of the exact year, so the magazine’s senior production director, Stacey Van Landingham (who recalled it right away) gamely dived into our archives, eventually finding it in the September 2004 issue. “It’s like looking for a nipple in a haystack!” she told me. And no kidding. The horizontal ad features a naked woman in repose, holding an avocado margarita so that it just covers her breasts. On her belly lies an avocado, cut in half, showing the pit and all. Above this, in matching green text, are the words “Look what Curra’s exclusive Avocado Margarita can do for you!”

Even as a fan, I’m not sure what that means. But in any case, “People came from Houston to Austin because they saw that ad,” Garcia says. Soon, national media came calling, and now Curra’s sells about two thousand of the margaritas each week across both locations. Garcia also credits to-go sales of the drink with helping the business survive during the pandemic shutdown.

The other day, I was enjoying my avocado margarita with my current order of choice, the camarones Campeche (sautéed shrimp glazed in mezcal and tossed with vegetables), when a friend stopped by my table. Pointing at my drink, she said, “Oh, I’ve always wanted to order one but was too nervous. It’s so green.” I, of course, offered her a sip. 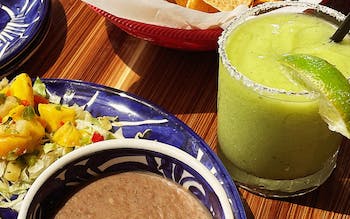 Use a quality blender that can really puree the ice; otherwise, it won’t be creamy.
Comment and Review

King Ranch Is Turning Its Invasive Mesquite Problem Into Bourbon