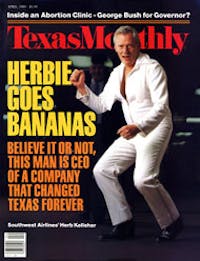 Cowboys, wrote Western historian Ramon Adams, would go to hell for a piece of pie. In the culinary wilderness that was nineteenth-century Texas, anything sweeter than molasses or prunes was just pie in the sky. Sugar was such a luxury that early Texans never dreamed of wasting it in their coffee or corn bread. Even rarer were eggs and milk, so Texans never cared much for cake.

Maybe that early deprivation accounts for modern Texans’ wantonness. They’ll try anything to satisfy a sweet tooth, especially anything with a regional flavor: candied grapefruit peel, watermelon-rind pickles, pinto-bean spice cake, and prickly-pear, agarita, or mayhaw jelly. Rural cooks are especially fond of sweet congealed salads (gelatin is, after all, a beef by-product). They have added pecans, guacamole, Ruby Reds, or green chiles and tomatoes to Jell-O. Even Helen Corbitt, Neiman Marcus’ culinary tastemaker in the fifties and sixties, was not above attempting avocado sherbet (“The curdled look,” she assured readers, “will disappear in freezing”).

Despite such regional excesses, Texas’ favorite desserts remain the classics: simple, substantial, sweet. The top twelve listed here owe a lot to native fruits and nuts, or immigrant know-how. Some are traditional and some new, for today Texas’ sweet legacy extends beyond the range to the fridge, from fruit fresh off the vine to frozen confections like guajillo-honey ice cream. Which means any good Texan can now eat his pie Alamode.

The favored finale to a Tex-Mex meal, the ubiquitous praline is neither Tex nor Mex. The sugary counterpoint to salsas and enchiladas originated in France in the seventeenth century; it was named for a high-ranking soldier under Louis XIV. Except for spelling, it arrived in Texas intact. The history of the praline is severely under-documented: did it drift westward from the French stronghold of New Orleans or mosey over from the court of Maximilian, the ill-fated emperor of Mexico? Regardless, today the praline boasts as many recipes as pronunciations, but invariably it combines nuts, sugar, cream or butter, milk, and vanilla.

The very name transports you instantly to Six Flags — perhaps a childhood birthday party or a graduation fling. Properly termed a “Buried Treasure,” because a cartoon character is depicted on the hidden end of the stick, the cherry-flavored ice-cream novelty is popularly called a Pink Thing. The tornado-shaped Pink Thing blew into Arlington in 1961, the year Six Flags opened. Back then, it cost 25 cents. Now one sets you back $1, and the manufacturer, Blue Bell Creameries, sells 400,000 every year. The Pink Thing is as essential to Six Flags as the Shock Wave or the Log Flume, and it is available nowhere outside the Metroplex. Like the whooping crane and the pronghorn, its limited habitat creates its allure.

LBJ adored Hill Country peaches. He served peach melba to the president of Pakistan and peach ice cream to the president of Mexico. The ice cream was Lady Bird’s — homemade and hand-cranked — and almost as good as Blue Bell’s. In 1911 the company sold two gallons of vanilla a day; today Blue Bell is a Texas synonym for ice cream and annually sells 10 million half-gallon tubs of Homemade Vanilla along.

“Worth crowing about!” clucks a cowboy-hatted hen on the wrapper. A long, dirty-yellow tube of peanut butter, sugar, and toasted coconut, it has been made since 1954 by Atkinson Candy of Lufkin, which also produces such gems as the pink-and-white-striped Rainbow Coconut (“luscious coconut taste thrill”). Chick-O-Stick — at least three times the age of its average consumer — was modeled after two rival candy novelties, Chicken Bone and Turkey Leg, both of which are now defunct. Perhaps by virtue of its less hideous nam, Chick-O-Stick remains Atkinson’s best-selling sweet. Grown-ups prefer the number two confection, the “smackin’ good” Peanut Butter Bar.

The brilliantly colored Mexican snow cones, whose vendors line Alamo Plaza, sell year-round in sultry San Antonio. Flavored syrups like coconut (blue, for some reason), grape, and lime turn shaved ice in a paper cone into the perfect summertime street food. Luridly red or alarmingly purple lips identify recent indulgers. So popular and so lucrative are raspas (the name comes from the Spanish verb raspar, “to scrape”) that two wrangling vendedores nearly came to blows a few years back over who was entitled to what patch of turf. Fortunately, the city council intervened and put the dispute on ice.

The nation’s third-best-selling soft drink, born 103 years ago in Waco, has been added to Jell-O, ham sauce, and dips. It has even been served hot. But the most popular Dr Pepper combo is one every elementary school kid in the fifties knew. A devotee bought a cold Dr Pepper (which was sold only in bottles then), poured in a nickel bag of peanuts, drank the salty soda, then crunched the soaked nuts. Flirting with death by asphyxiation was part of the thrill.

It consistently appears on a regional Top 25 list of candy bars, according to a national candy-industry survey. The familiar nut-studded magenta patty, a Lubbock native, is going on forty years old. It was created by Raymond O. Goodart, a young soldier home from World War II and looking for a job. He perfected the recipe in his mother’s kitchen. Goodart died in 1986, but his Peanut Pattie is going strong, from California to Florida and all points in between. True addicts buy the lethal Texas-shaped two pounder.

It won Houstonian Ella Helfrich $5,000 at the 1966 Pillsbury Bake-Off Contest and has since become a bake-sale staple nationwide. Followed faithfully, the exacting recipe produces a rich, pecan-riddled cake with a puddinglike center. It also started a craze for fluted Bundt pans. The original recipe called for a full box of a certain Pillsbury chocolate frosting mix; when the company discontinued that particular product, it was swamped with letters from annoyed customers protesting the threat to their favorite dessert. The cooks in Pillsbury’s test kitchens obliged by updating the recipe with powdered sugar and cocoa and all this before “chocoholic” was even a word.

While a New Yorker orders a danish with his coffee, South Texans choose the delectable Czech pastry made of yeast dough with a sweet filling. Czech Texans have been baking kolaches since 1852, when their ancestors first arrived. Traditional fillings are prune, apricot, poppy seed, and cottage cheese.

Making kolaches isn’t hard, says Alice Gerken (n&eacutee Gajewski) of Fairchilds: “It’s just that it takes so long to make them, understand; to make twenty dozen, it takes me nine hours.” She must first prepare the fillings and the yeast, then mix the dough, knead it, let it rise, cut out the kolaches, let them rise again, fill them, let them rise a third time, and finally put them in the oven. Whew!

Fittingly, Texas’ state tree gives us the nut that in turn gives us our favorite pie, the richest, densest, most highly caloric of Texas sweets — and one of the easiest to fix. Highfalutin recipes call for dates, raisins, coconut, or chocolate. A cookified version won a Pillsbury Bake-Off Contest grand prize of $25,000 for Albina Flieller of Floresville in 1973. But pecan pie needs no artifice. Any good recipe calls for pecan halves, never pieces; better recipes specify dark corn syrup; the best — well, never mind. Haven’t you got a grandmother of your own?

The best thing to happen to the yam since Popeye’s existential statement. The few remaining Texans who actually eat the much-maligned tuber are more likely to prepare it as a dessert than as a vegetable. (If you can’t tell the difference, go by the presence or — hopefully — absence of marshmallows.) You might as well mainline glucose as eat most Mexican sweets, but the sweet-potato empanada is comparatively tart — although in the interior, street vendors sell camotes (sweet potatoes) as candy, crystallized or cooked in molasses. The clear winner in the fried-pie category, the sweet-potato empanada gets an A — for offering a little of that vitamin to boot.