As stomachs begin to grumble on road trips, Texans are drawn—almost trance-like—to the orange-and-white beacon of Whataburger. The chain has built its reputation on being fast, friendly, family-owned, and consistently tasty. But we’ve got news, Whataburger fans: There’s a new burger joint popping up across Texas that not only checks those same boxes, but has an equally devoted fanbase.

In California, In-N-Out has gained a cult-like following not unlike Whataburger’s in Texas. The transplant currently has 35 locations in Texas, mostly concentrated in Dallas-Fort Worth. But the chain is expanding slowly across Austin and San Antonio metro areas, and in July bought land in Houston—a tacit confirmation of longtime rumors that it would expand to the largest city in Texas.

A Texas Relocation Report released earlier this year confirms what many Texans, at least anecdotally, already know to be true: Californians are moving to Texans in droves. It makes sense, then, that In-N-Out would capitalize on these newly minted Texans’ taste for animal-style fries. But will the continued influx of Golden Staters bring with them a shift in Texas’s fast food sensibilities? Could the hype of In-N-Out eclipse the tried-and-true taste of a quintessentially Texan drive-thru experience?

We asked our own recent California transplant, Charley Locke, to make the case for her home state’s fabled burger stop. The Texanist himself, David Courtney, has stepped up to the plate to defend Whataburger’s honor. Let’s settle, once and for all, which one of these state favorites comes out on top. After you read through their defenses, be sure to cast your own vote.

In-N-Out: The key to a great fast food burger, of course, is the meat, and In-N-Out’s is the best because it’s the freshest. There’s no freezer. No microwave. No heat lamp. Look into the open kitchen—that’s right, at In-N-Out, there’s nothing to hide—as friendly cooks take your fresh burger, done just as you like it, and top it with similarly fresh ingredients. Delicately melted cheese hugs your patty, and hand-leafed iceberg lettuce and generous slices of tomato and onion rest atop it. The glorious stack is then encased in a bun that’s toasted just as buns should be: only on the inner side, making it crunchy on the inside, soft on the outside. The result? A bite that tastes like juicy burger meat, accented with the taste of ever-true American cheese and tangy-sweet special sauce (no overpowering taste of mustard here, Whataburger), with the textural variety of crunchy lettuce and ripe tomato. It’s a bite that tastes like celebrating with your teammates after a tee-ball championship, like that late-night sense of freedom when you first got your driver’s license, like college road trip pilgrimages. The taste of an In-N-Out burger is classic. The yellow arrow points you toward home.

Whataburger: A Whataburger cheeseburger as it comes right off the menu—sans the “just-like-you-like-it” embellishments for which the restaurant has become known—provides its eater with the platonic ideal of a fast food burger. The warm, soft, and ever-so-toasty white bread bun has a slightly buttery kiss of golden toasting inside (the actual secret ingredient to this flavor is known as “bun oil”). A subtly seasoned beef patty—griddled to a fast food perfect medium-well-to-well doneness, then topped with a thin slice of silky American cheese—exudes a zap of umami, balanced by de rigueur veggies of lettuce, tomato, pickle, and onion and a relatively minimalistic condiment (read: yellow mustard). Put all together and wrapped in that familiar orangey-yellowy paper, and its individual elements join forces for a wholly satisfying cheeseburger experience. Plus, with a bun that’s five-inches in diameter, it’s bigger than your typical burger. And as everybody knows, a bigger burger is a better burger. The meaty core of the Whataburger is a thin(ish), but large(ish) slab of 100 percent ground beef, formed into a tender and tasty patty that is sturdy enough to not fall to pieces as the burger is consumed.

In-N-Out: In-N-Out offers a platonic fry: thin, crispy, and salty. My coworkers’ compared them to cardboard, which they have somehow confused with fresh from the ground potatoes. You know, the humble, oval-shaped vegetable? They’re shipped to your local In-N-Out from a farm, cut, and—moments before they are served to you—fried in 100 percent vegetable oil. They’re fresh, they’re tasty, and they’re just the right consistency and saltiness to dip into your creamy milkshake (made with real ice cream). Fries aren’t crispy enough for you? Go ahead and ask for them extra-crispy, and the good people of In-N-Out will gladly oblige. That’s the thing about a fast food chain where they actually make the food fresh, and to order: you can actually get your meal exactly how you want it.

Whataburger: Whataburger french fries are without peer. The thin-cut (not shoestring thin, mind you) potatoes are deep-fried to a point of perfection that results in a snappy exterior and sublimely spuddy interior. They come pre-salted and are so good that they made a star of an everyday condiment. Whataburger’s Fancy Ketchup is so famous that it has its own T-shirts. A ketchup with its own T-shirt! Such a thing would certainly not have been possible without an impeccable fry. 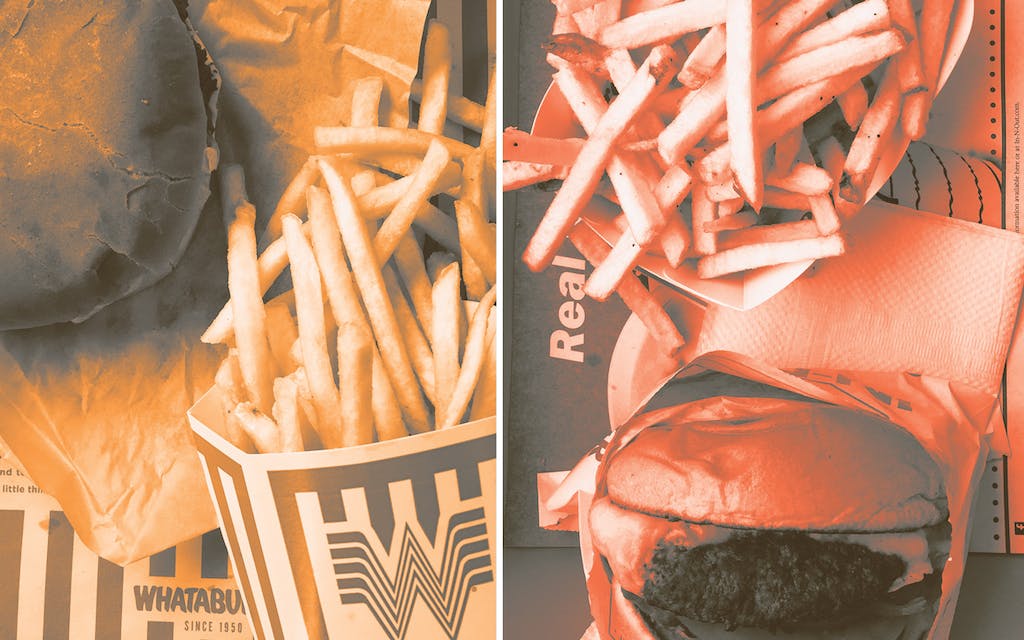 In-N-Out: In-N-Out is delicious, but I’m not just loyal to the food. When you walk past that welcoming yellow arrow, you know you’re among your people. Step inside for the endearingly old-timey menu and uniforms, including a free paper hat. (I’m not the only lifelong In-N-Out fan with happy childhood memories of wearing those hats for hours on a family road trip—which wouldn’t be complete without a stop at the drive-thru.) And clinch your membership in the In-N-Out club by ordering off the famously secret menu. Animal-style, which adds pickles, special sauce, grilled onions, and mustard to your order, is just the most well-known of the variations. Speaking of menus, do you notice anything else? In-N-Out not only has superior quality, but it also has unquestionably better pricing (and compensates its employees well, with a minimum of $11 per hour and insurance for full and part-time workers). A burger, french fries, and a shake? At In-N-Out, that’s a reasonable $5.85. At Whataburger, it’ll cost you a steep $8.22. Save those extra dollars for a second black-and-white shake. You’ll want it.

Whataburger: The in-shop dining experience at Whataburger is a thing of service industry beauty. Friendly and efficient employees (friendliness is a Texas trait) in not-overly-uniform uniforms are there to serve. And serve they do. Order at the counter from a straightforward menu, take your iconic table tent number (Like the Fancy Ketchup T-shirts, a commemorative keepsake version of the Whataburger table tents are available to purchase) to a seat and wait for your order to be delivered right to you with an offering of napkins and condiments—including that famous Whataburger Fancy Ketchup. Service with a smile.

In-N-Out: Is it the fanciest burger and fries you’ll ever have? No, of course not. If you’re looking for a truffle-bison burger with parmesan-encrusted sweet-potato fries—or even “Fancy Ketchup”—get outta my drive-thru. When I want a burger and fries, I want a burger and fries, not a honey butter chicken biscuit or taquitos or apple pie. (And I definitely don’t want a “garden salad.”) “Just like you like it”? I like it simple, fresh, and good, not with unnecessary trimmings distracting me from the main event. I like “quality you can taste.” In-N-Out—founded two years before Whataburger, mind you—is where you go when you want a delicious classic. It’s simply the best burger-and-fries in town.

Still not quite convinced? Fine, don’t take my word for it—ask Texas’s Queen B.

Whataburger: Founded by Harmon Dobson in Corpus Christi in 1950, Whataburger, on the quality of its made-to-order burgers, and eventual ever-presence (there are now over eight hundred Whataburgers scattered across the country, with some six hundred of those located in Texas) has become a Texas institution. If you grew up in Texas, it’s likely that you grew up on Whataburger.

But how good is a Whataburger? Really good. Really. In fact, summer before last, Texas Monthly administered a carefully controlled blind taste test in which Whataburger faced off against four worthy competitors, including recent California transplant In-N-Out Burger. Spoiler alert: Whataburger won. And it wasn’t even close. From the eleven impartial judges, Whataburger earned 46 out of a possible 55 points and five first-place votes. In-N-Out came in next to last with nineteen out fifty-five points and five last place votes. There’s burgers and then there’s burgers. In the immortal words of Mel Tillis, “it’s not just a hamburger. It’s a . . .Whataburger.” Plus, from 11 p.m. to 11 a.m. there are taquitos.