This story was originally published on TMBBQ.com. For more from our barbecue editor Daniel Vaughn, visit the site.

Texas is a beef barbecue state; in North Carolina they prefer pork. This isn’t news to most of you, but it may surprise some Texans to hear that people outside of the state our signature smoked brisket doesn’t meet the very definition of barbecue.

A plate of North Carolina BBQ at Grady’s in Dudley, NC

Several months ago I had a verbal sparring match with staunch North Carolina barbecue advocate John Shelton Reed. The banter was all in fun, but he did sum up the feelings of some pork-ophiles:

Many Tar Heels will allow that those other meats can be tasty, but we don’t actually believe that they are barbecue, and we wish y’all would call them something else to prevent confusion. So when I say “North Carolina barbecue”—in fact, when I say “barbecue”—I mean pork, cooked for a long time at a low temperature with heat and smoke from burning coals, and served with a peppery vinegar-based sauce.

I took a trip to the Carolinas earlier this year. I went as a culinary tourist with an itinerary that included the most celebrated barbecue joints in both sides of the state. See, much like in Texas where barbecue varies by region, in North Carolina there is a divide in the barbecue traditions between the east and the west. A north-south line through Raleigh serves as the vague border. The east is known for cooking whole hogs and mixing their chopped meat with a clear sauce made primarily from vinegar. In the Piedmont region (the west), they cook only the pork shoulder and serve it with a similar sauce, but it’s tinted red with ketchup. To a Texan, there seemed to be more similarities in “The Vinegar State” (a common North Carolina nickname in barbecue circles) than differences, but it was in the Piedmont that I came to an epiphany. Besides our thoroughly divergent menus, North Carolina barbecue and Texas barbecue have more similarities than I ever expected.

Greensboro, North Carolina, located in the Piedmont, was my first stop that didn’t include the sight of whole hogs over hickory coals. I’d left behind the charming but rustic rural joints in the east and was now in the expansive asphalt parking lot of Stamey’s Old Fashioned Barbecue in North Carolina’s third largest city. Warner Stamey is a barbecue legend who first began his barbecue business in the thirties. The kids took over in the seventies and built this unassuming building in 1979 after scraping the site of the original drive-in. As I was seated I thought it could probably be converted into any number of chain restaurants with about a weekend’s worth of work.

A plate of sliced pork at Stamey’s in Greensboro, NC

The menu was a mostly familiar one, with pork shoulders being the staple of barbecue here, but sliced pork was an option, one I figured I ought to order. It arrived pale, lukewarm, and lifeless. After a few dry, chewy bites I was happy to move on to the Brunswick stew. With a half full plate remaining, I asked for the check and walked dejectedly to the car. Wasted stomach space is always lamentable on long barbecue journeys. I quickly checked back on my notes to see why I’d come here in the first place. Despite mediocre online reviews, I’d chosen this stop for a reason. That’s when I saw the photos from the Barbecue Bus website. There were glorious looking slices of deeply colored pork in their report from the previous year, and I’d forgotten the peach cobbler. I had to go back in. 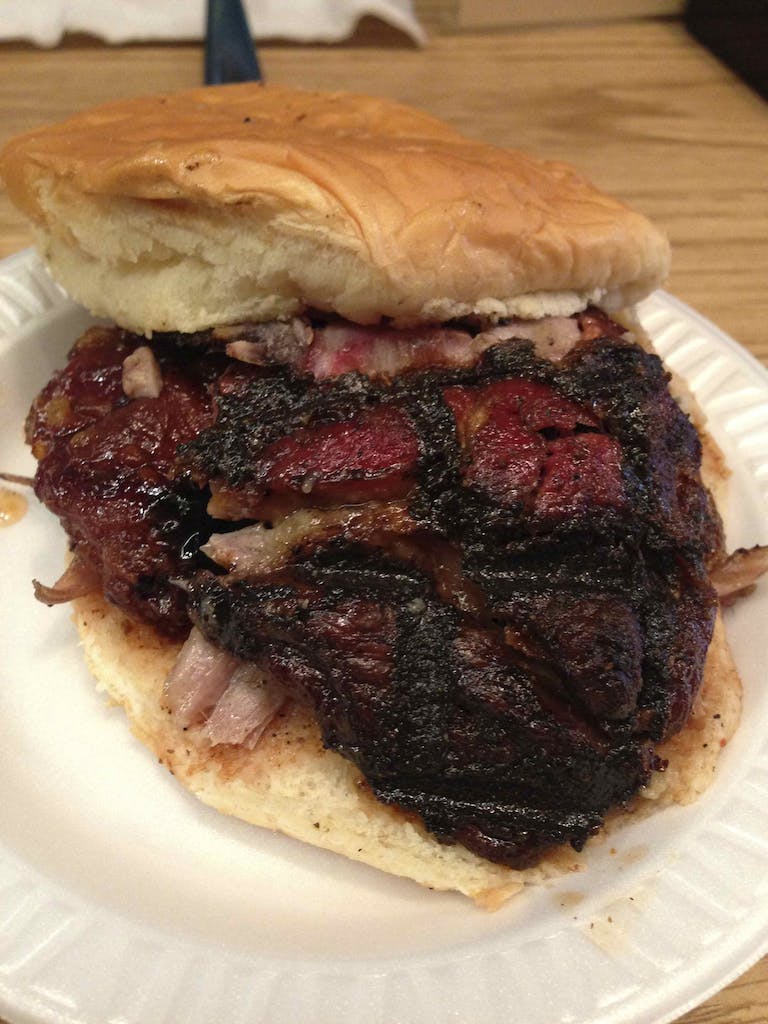 Outside brown pork sandwich at Stamey’s

This time I sat at the counter and ordered a sliced pork sandwich with “outside brown” meat. This isn’t listed on the menu, but outside brown (sometimes called Mr. Brown) is that crusty stuff sliced from the edges of the pork shoulders. If you don’t ask for it, you get the interior white meat, which might as well be boneless, skinless chicken breast. When it arrived the pork looked incredible. A few thick slices of juicy meat with a deep mahogany crust graced the bun.  I grabbed a few fingers full of pork and took a bite. The rush of flavor was intense. My mouth was coated with the melting fat still clinging to the meat. Bits of the skin crunched beneath my teeth. This was the barbecue I had traveled for. It was so stunning I knew every stop in front of me would include some outside brown, and that’s when it hit me. Outside brown from a pork shoulder is the fatty brisket of North Carolina.

Think about it. Slices of fatty brisket, especially the end cuts, are considered trash by some – meant only for the scrap barrel. To the connoisseur it is the ultimate in barbecue flavor. The meat is full of melted fat, it tastes intensely like smoke and fire, and it is highly seasoned meat because it’s from the surface. The most important similarity is that you have to ask for it. Sure, there are menus in North Carolina that include outside brown printed on the menu, just as there are some Texas barbecue menus with fatty or moist brisket as an option, but by and large you have to know to ask for it. Otherwise, you get slices of lean brisket (or pale pork) just like everyone else. When you do ask for it, the person slicing the meat knows that you know your stuff. 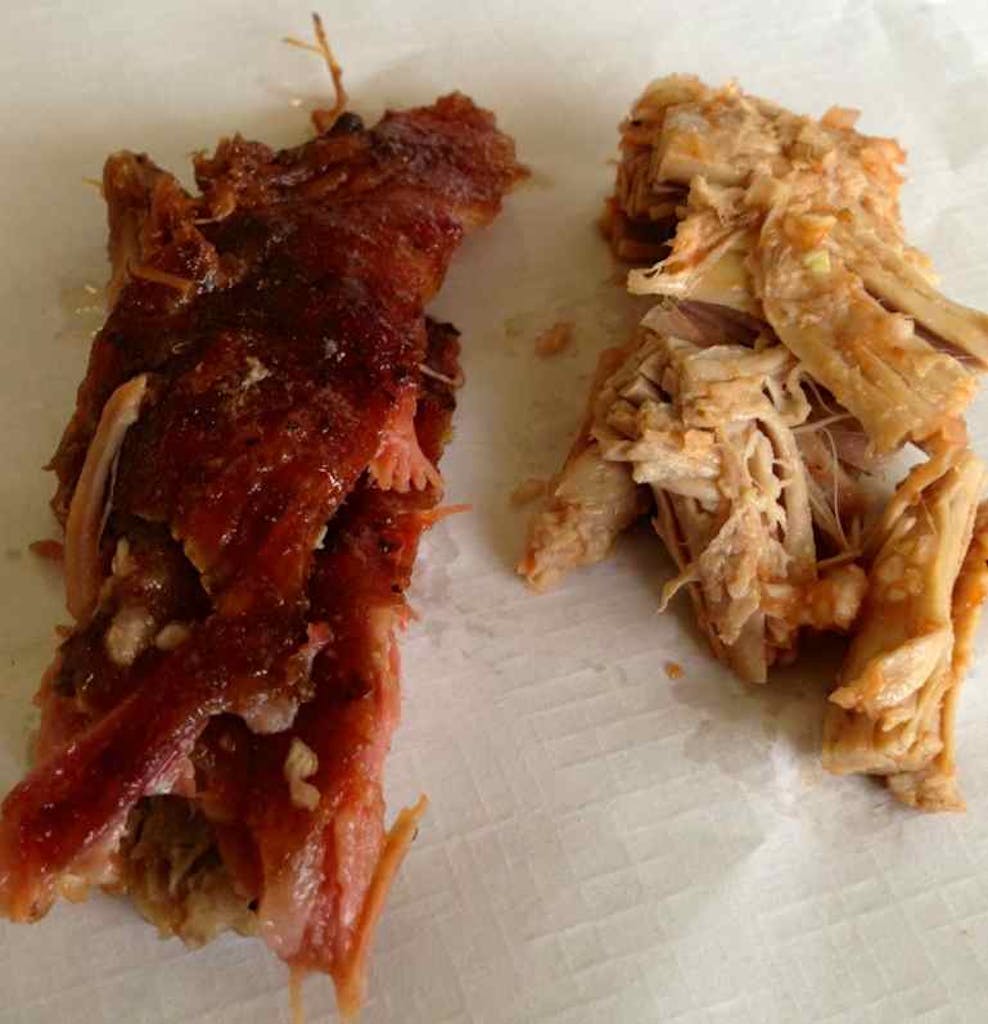 Not everyone in Texas likes fatty brisket, and not everyone in North Carolina is even familiar with outside brown meat. I was in a barbecue joint in West Texas recently where a patron who recognized me questioned why I’m such a big promoter of fat being left on the brisket. I told him it was because it’s delicious. He didn’t agree, so I suggested he cut the fat off on his slices. I wouldn’t ask for fat to be trimmed off my brisket in the same way that I wouldn’t order another pork sandwich in the Piedmont without asking for a little Mr. Brown. There at the counter of Stamey’s this unfamiliar meat caused a few raised eyebrows. There were regular customers who were on a first name basis with the server that asked me point blank what I was eating. I countered with my own question to them: “what have you been missing?” It’s like they’d been going to Pappas Bros. Steakhouse all these years and ordering the chicken. Poor souls.

All over North Carolina they cook over wood coals. You’ll rarely find an offset smoker. Taking in the smoke coming from every barbecue joint parking lot I stopped at took me back to the Texas Hill Country where the cooking method is almost identical. “German style” is how some folks in Texas describe these direct heat pits where wood coals shoveled directly beneath the meat serve as fuel. Germans were important in the settling of the Texas Hill Country as well as the Piedmont area of North Carolina (you can read more about the political similarities of these German immigrants in Robb Walsh’s Barbecue Crossroads). John Shelton Reed and Dale Volberg Reed discuss the “German Factor” in developing the unique Piedmont style of barbecue in their book on North Carolina barbecue entitled Holy Smoke. In it they note the popularity of Schäufele, a Bavarian sliced, smoked pork shoulder dish, with a vinegary sauce which “has something of a cult following in Germany today.” The pork shoulders of the Piedmont may just be a replication of this revered dish. It’s the use of these pork shoulders, rather than whole hog, that make it taste like a slice of the Hill Country. 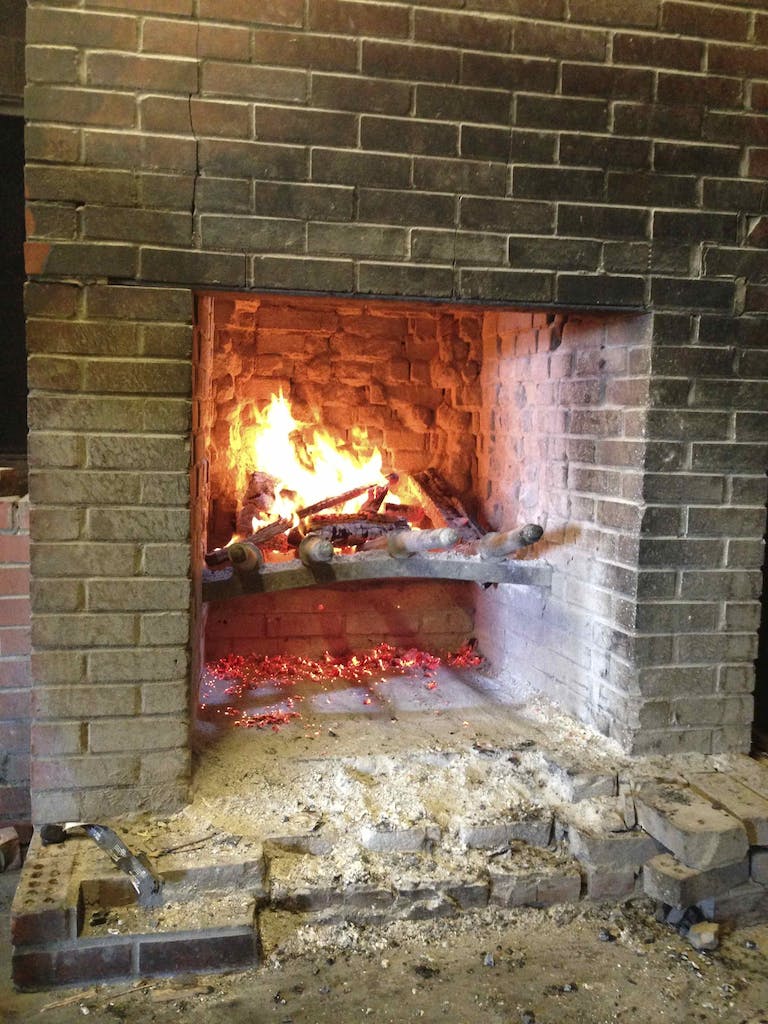 A typical sight in NC. Burning wood down to coals.

When fat from cooking meat falls into hot coals beneath it, the fat pyrolizes into wisps of smoke. This essentially gives the meat a little puff of smoke from every drip of fat. That flavor from the coals is what causes Texas Hill Country barbecue to differ dramatically from the intense smokiness of the Central Texas style, but it’s almost identical to the flavor of pork shoulders in the Piedmont. The cooking method is the same in the eastern part of North Carolina, but the hog skin acts as a barrier between meat and pyrolysis. You get a hint of that flavor if the skin is chopped in with the rest of the hog meat, but it’s nothing like the intensity of the outside layer of a barbecued shoulder. The whole shoulder (about the size of a large brisket) also has so much more surface area to pick up the smoke than a whole hog. If you’re in Texas looking for a similar flavor, just go to Snow’s BBQ in Lexington and get some of their pork steak. It is pork shoulder cooked directly over wood coals, just like they do it in North Carolina. 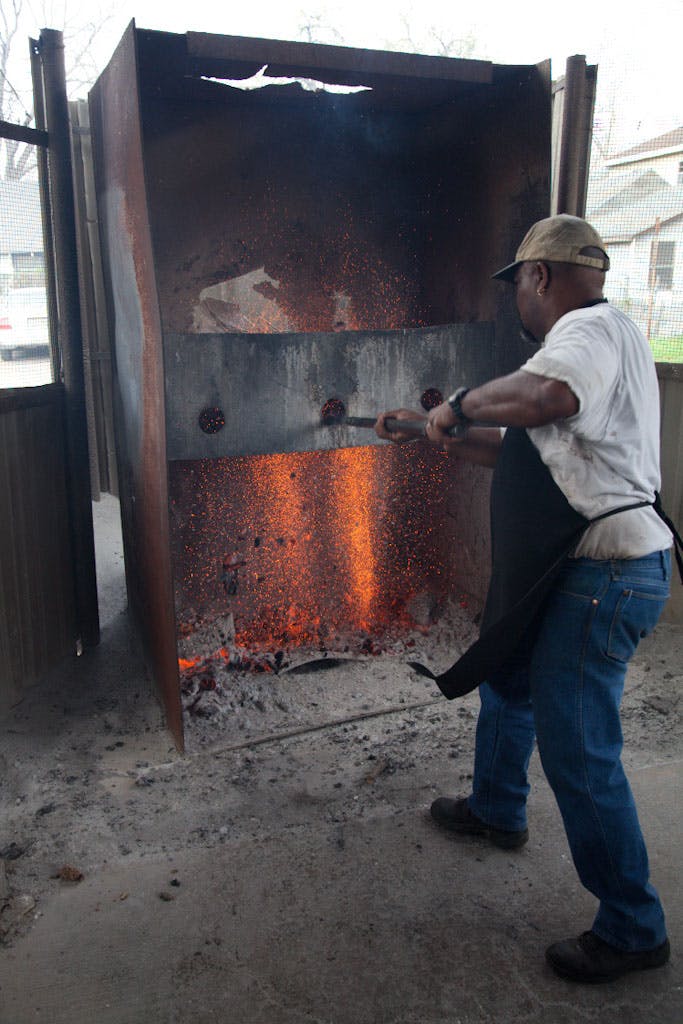 Burning wood down to coals in Texas. Photo by Nicholas McWhirter

If all of the similarities mentioned above seem like a stretch or a technicality, the most important parallel between Texas barbecue and the barbecue found all over the state of North Carolina is the reverence for all-wood cooking. The die-hards in the Tarheel state lament the dwindling number of barbecue joints still doing it the old way. They view this as an example of people in the state not caring how their food is prepared, but it is precisely that staunch support of the old way that sheds light on the hallowed barbecue joints that still cook with wood. Choosing my itinerary for the North Carolina leg was pretty easy because all of the joints that eschew gas are considered to be in a higher category, and everybody in the state who cares about barbecue wants you to know it. It’s that way in Texas too, where cooking with all wood is still considered something worth seeking out. These days in Kansas City or Memphis the cooking method is rarely mentioned as a deciding point between barbecue joints. Elements like sauce and sides are given equal importance, but it’s Texans and Carolinians that know that an active wood fire is paramount for great barbecue.

After that first encounter with outside brown at Stamey’s I enjoyed many more pork sandwiches in the Piedmont. I went to the Carolinas with an open mind, and I came back plenty impressed with the barbecue there, if more than a little hungry for brisket. Maybe some in North Carolina will never accept beef cooked over hardwood coals as barbecue, but if they come to the Hill Country with an open mind they might find more barbecue common ground than they expected. 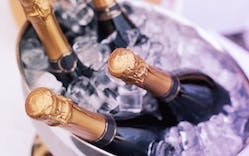