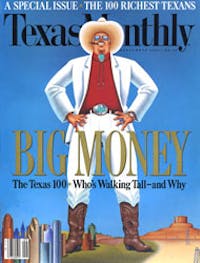 The first burn was the deepest. Entrepreneur Jeff Campbell had been waiting for months to sample one of his homegrown habanero chiles. A Stonewall farmer who eats chile peppers at every meal and snacks on whole jalapeños, Campbell had heard that the habanero was the hottest pepper known to man, but he had never tasted one. So when it came time to harvest his first habanero, he pulled a ripe one off the bush and bit into it as he would a jalapeño.

“That was a major mistake,” he recalls. At first Campbell tasted only the chile’s distinctive flavor, followed by a several-second lull, during which he wondered what all the fuss was about. There then blasted forth a hellacious afterburn, a chemical heat like nothing he had ever experienced. It spread across his tongue and through his mouth, pausing momentarily to regroup before continuing to surge for at least the next ten minutes. “I spit it out,” Campbell says, “and drove as fast as I could to the bar. Actually, I’m being a smart aleck when I say that; I got water somewhere to wash it down, and then I came to the bar and drank a cold beer.” After regaining the feeling in his mouth, he drank some more beer, just to be safe. And Campbell, a man who heretofore had feared no chile, has not bitten into a whole habanero since.

The habanero is the chile of the moment. But Campbell’s ten-acre spread in Central Texas is one of only two farms in the nation—the other is in California—that grows habaneros commercially. If the fad continues to grow, however, other farms will undoubtedly sprout up in the next few years.

At the Third National Fiery Foods Show last February in Albuquerque, 10 percent of the one-hundred-plus booths featured habanero-based products such as sauces and jerk mixes—Jamaican dry spice rubs for meats. In Texas fresh, dried, or ground habaneros have turned up in the produce section at supermar-ket chains like H.E.B. as well as at farmers’ markets and specialty spice shops like Pendery’s in Fort Worth. Habanero sauces are also becoming fairly common—labels to look for include El Yucateco, La Anita, and Loltun from Mexico and Melinda’s from Belize.

What is it about habaneros that tantalizes people? Some say it’s the aroma and the flavor. They do give off a wonderful fruity fragrance, somewhere between an orange and an apricot, and the flavor is equally rich. But the real fascination is the habanero’s firepower. Habaneros check in at 200,000 to 300,000 Scoville Units, which is the measure of capsaicin, the chemical that gives peppers their burn. That means habaneros can be more than a hundred times hotter than jalapeños, which measure a wimpy 2,500 to 6,000 Scoville Units. We are not likely to see habanero-eating contests in the near future—although in the Yucatán and the Caribbean, where most of the world’s supply is grown, some people apparently do munch them raw.

Because this chile is so new here, little is known about it. “Habanero” means “Havana-like” or “from Havana,” which indicates that the chile probably originated in Cuba. In 1722 Dominican priest Francisco Ximénez, in a natural history of Guatemala, mentioned a chile from Havana so hot that one pod was enough to make “a bull unable to eat.” Researchers think he was referring to the habanero; it is the only pepper in the Yucatán that doesn’t have a Mayan name, which suggests that it was imported. The habanero is a variety of Capsicum chinense (most peppers belong to Capsicum annuum). Until recently, it was believed that the habanero could not be grown outside the Yucatán and the Caribbean.

But that was before Jeff Campbell decided to try it. When the burly, bearded Alabaman first arrived in Stonewall in 1984, he raised tomatoes, onions, and various chiles. He learned of habaneros from a magazine a year or two later, and at the next Terlingua Chili Cookoff, a friend gave him habanero seeds from Belize. Campbell and his partner, Lester Betts, planted half an acre of habaneros and took a sackful of pods to the First National Fiery Foods Show in El Paso. Nobody knew what they were, but they were a hit.

Considering his novice status, Campbell has had relatively few problems raising habaneros. The hard part is processing them. To grind jalapeños, for example, he wears surgical gloves and a dust mask, and he works in a back room at his Stonewall Chili Pepper Company shop. But when he grinds habaneros, he must close the shop so that customers won’t breathe the chile dust. He wears a long-sleeved shirt buttoned at the top and a bandanna around his neck. A respirator with an air tank replaces the dust mask, and he leaves his gloves on to wash out pots. “You get that habanero on your hand and it hurts. I have gone to sleep at night with my hand in a bucket of ice water because of it,” Campbell says.

Still, he’s not about to stop working with habaneros. Last spring Campbell and Betts planted four acres, and they will easily sell their whole crop after they harvest it this month. At his shop on U.S. 290 in Stonewall, Campbell sells his devastating Salsa Habanero (which he recommends using only as a flavoring in soups or stews), a more manageable Salsa del Diablo to eat with chips, and such novelties as habanero-flavored suckers and ketchup. He also has powdered habanero and fresh or dried habaneros. Heat enthusiasts regularly make the pilgrimage to Campbell’s store to buy the peppers; one customer •âies down from Alaska annually and buys half a pound to a pound, enough to make chili con carne every week for a year. Campbell also ships fresh habaneros to a gourmet shop outside Chicago and to an Oregon restaurant run by an El Paso native.

Working with habaneros has given Campbell some insight into the strange ways of human nature. “People always do want it hotter; that’s the reason habaneros caught on,” he says. “I don’t know if there’s anything like developing a tolerance or not, but I know I like it hotter than I did ten years ago.” Back then, Campbell ate only in bars when he went up north, because he knew that a place that made Bloody Marys would at least have Tabasco sauce. Nowadays chiles are so pervasive, he doesn’t need to pack his own bottle of Tabasco when he travels. As Dave DeWitt, the editor of Albuquerque-based Chile Pepper magazine, says, “The fiery-foods market is continuing to grow, and the mystique of being the hottest chile pepper is definitely helping the habanero. It’s one of those things you either like or don’t like.”

But for Jeff Campbell and his fellow heat lovers, it’s the only way to go.

John Morthland is a freelance writer who lives in Austin.