Arro is only about half a mile from my office and on my way home, which may help explain why I keep finding myself there after work. The first time, I only planned to meet a friend for a glass of wine and the interesting cheese board from Antonelli’s that I’d read about. But that was before we simultaneously spotted Arro’s incredibly priced $25 three-course prix-fixe menu. How could we not stay for dinner? Suzi got the lobster bisque to start, and I got the vegetable tart, a tidy little puff-pastry pie of basil-scented local tomatoes, pickled corn kernels, and caramelized onion. When our main courses arrived, we found ourselves trading bites of her splendid mussels with herb-sprinkled frites and my pickled-mushroom salad lavished with a lovely poached egg and nuggets of Bleu des Causses cheese. After these resounding successes, we were a bit surprised by a slightly grainy-textured lemon–goat cheese tart in an austere ginger-chamomile sauce. But overall, I thought as we left, this place could become a habit.

Arro—whose name is a four-letter snippet of the French phrase arroser la vie, meaning “make a toast to life”—is the third restaurant from chefs Drew and Mary Catherine Curren. If you live in Austin, you know the husband and wife from their other restaurants, 24 Diner (opened in 2009) and Easy Tiger Bake Shop and Beer Garden (2012). You may not know, though, that the pair have been itching to open a French restaurant since they met as students at the Culinary Institute of America in New York eleven years ago. Says Drew, “What we had in mind was taking local ingredients and applying some super-classic French techniques but focusing on the light, clean side of French food—it’s not all butter, cream, and heavy brown sauces.” They got their wish when a prime downtown space on West Sixth became available. By mid-July, following a slick remodel by Veronica Koltuniak, barely a trace remained of the former occupant’s rabbit warren of small, dark rooms. Sunlight now pours through banks of windows into a single soaring white space, where different sections are subtly defined by walls covered in shiny metallic strips and weathered wood planks. One especially appealing feature, saved in the remodel, is a well-burnished, brass-edged wooden bar, where you can get the full menu.

Not long after that first visit, I returned with a couple more friends in tow. Loosening my typical death grip on ordering for everyone, I announced magnanimously, “Choose whatever you like.” I immediately regretted my decision when Ave said, “I want the seafood stew!” Groan. That dish needs really precise cooking and pristine seafood, but my worries were overblown. The mussels and clams were briny-fresh and the chunk of black grouper nice and meaty (if a tad overdone), but what stood out the most was the dish’s wonderfully flavorful, soupy broth scented with fennel, tomatoes, leeks, and a garden’s worth of herbs. If only the thick-cut rustic bread alongside had been brushed with olive oil and toasted, it would have been perfect. My friend Jan’s choice—“I’d like the wood-grilled fish, please”—had sounded healthy but terminally boring. In fact, it was adroitly seasoned and came in a ravishing broth (its base a fumet of roasted halibut bones) with potatoes, creamer peas, and cherry tomatoes. My own choice, grilled antelope (pictured), made it three for three. The lean, deep-red medallions had a grass-fed heartiness and just a bit of a chew. A peppery, crusty edge delineated each one. Best, they sat on a bed of spectacular sautéed vegetables, these bumped up by farro, a mix of wild mushrooms, and lightly chopped toasted hazelnuts. Glorious.

A few days later, I called Drew to get some details about the food. We got to chatting, and he told me about his approach to introducing beginners, especially twentysomethings, to French cuisine. “It was key to have a wood grill,” he said, “so when people walk in they get that familiar smell of burning oak.” Once he won their confidence and trust with steak frites, it would be easy to move on to more-purely-traditional dishes, he said. Very subliminal, I thought. I began to imagine him as a latter-day pied piper, but with scents instead of music.

Prompted perhaps by that conversation, the next time I dropped by I went totally native, ordering French onion soup and duck confit. I was reminded that these simple-seeming dishes are not easy to pull off. While perfectly pleasant, the soup was almost like onion marmalade; that earthy, beefy flavor that I personally crave had been lost in translation. As for the fowl, three fourths was nice and moist but the all-too-familiar Curse of Duck Confit had left the outer edges of the creature’s leg and thigh stringy and dry. Even more annoying, while my choices were going awry, my friend Dale was inhaling the seafood stew—excellent again. I got the cookies for dessert: lavender madeleine, olive-oil shortbread, plum linzer, and salted chocolate chip. Interesting-sounding, they were accomplished without being exciting. Dale, meanwhile, polished off a fine chocolate pot de crème with a brilliant garnish of chocolate nib brittle.

Three days later, I was driving home from work, intending to stop at the Whole Foods salad bar. Instead, before I knew it, the car had parked itself outside Arro and I was sitting at the bar—my new favorite place—plowing into one of the most iconic dishes in the French repertoire: frogs’ legs in garlic brown butter. I have two observations: First, I wouldn’t want to meet a frog that size in a dark alley. Second, those were the best frogs’ legs I’ve ever had, including in Paris. Delicately crusted, meaty, and tender, they were, in a word, sublime. To be truthful, the fine accompanying salad (an assortment of greens that included arugula and purslane) ended up wilting under a surfeit of hot melted butter, but by the time that happened, very little was left on the plate. Back in the car, I beat myself up a little and vowed to eat something sensible the next night. Even as I pulled into traffic, though, I knew there was a good chance I wouldn’t. Arro had already become a habit. 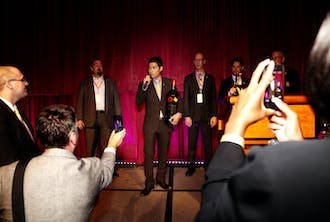 And Texas’s Best Sommelier Is…